by Herman Manson (@marklives) The glossy Sunday read launched by City Press in October 2011, i, will be distributed nationally from this Sunday (June 3). The magazine was previously only distributed in Gauteng and KwaZulu-Natal – two key growth markets for the paper. 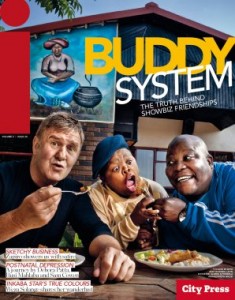 i magazine is published for City Press by content marketing firm New Media, which also holds the contract for My Tyd, the Sunday glossy distributed by Rapport.

According to New Media’s business development director, Andrew Nunneley, the intention had always been to eventually distribute i nationally. However, initially it proved prohibitively expensive, but with increasing advertiser buy-in the magazine is now more sustainable and national distribution has become viable.

It will also be an easier sell and make it easier to attract big brands with a national distribution. City Press is still investing in the title which is produced as a 32 pager and averages around 14 pages of advertising a week. The magazine is already being used by large jewellery and fragrance brands which compliments to title – launched after research showed City Press readers wanted a more aspirational lifestyle element to their Sunday reading experience.

The content has continued to evolve and will now feature a broader geographic split making it accessible to a wider variety of people.

Nunneley says the move validates the work that has gone into the magazine which aimed to copy the success of the UK newspaper markets’ high-end Sunday magazine reads.

Nunnely says i magazine and My Tyd, produced for Rapport, now has a footprint of 550 000 copies between then, making it attractive to national advertisers, and for which package rates are available.

City Press saw circulation increases of 15,64% year-on-year and 9.5% against the previous quarter to 163 705 the Audit Bureau of Circulations (ABC) figures for the first quarter of 2012 show.