You would not expect a Congolese movie to be bringing home an MTV movie award, as Viva Riva! did when it was named Best African Movie at the MTV movie awards recently, not when there has not been a movie made in the Congo in 25 years and especially not when, until recently there was not a single movie house to show it, reports Colin Macrae. 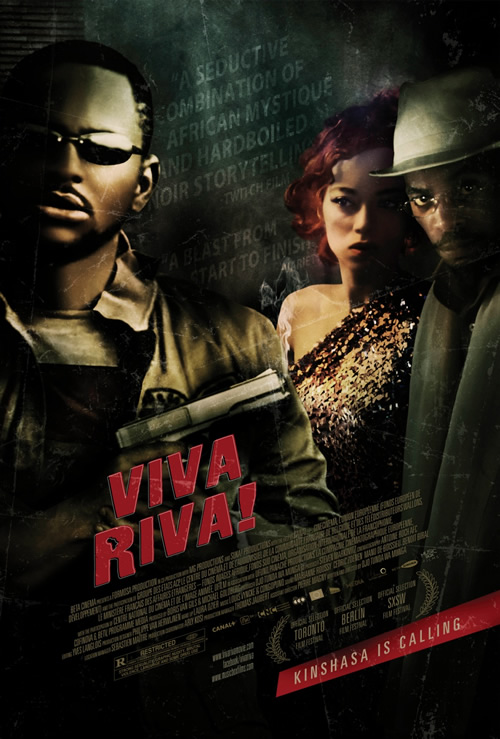 This, however, is no ordinary African movie, gone is the pedantic pandering, the look what we have done wrong hand wringing, the exotic romanticism. This goes straight for the jugular, a fast paced edgy crime film that could be set anywhere from Chandler’s LA to Scorsese’s New York, De Palma’s Miami or even Guy Ritchie’s London for that matter.

But this is the Congo, the original heart of darkness that has had to endure the worst forms of colonialism, followed by the despotic rule of dictators like Mobutu Sese Seko and endless civil war. This is no ordinary setting. For first time director and Congolese born Djo Tunda Wa Munga to take such familiar celluloid stereotypes as the criminal, the gangster and of course the moll and put them in the surreal setting of Africa in transition is a masterstroke.

The set up is universal, the lovable rogue criminal returns to the Congo from Angola with his swag. On a night out in his hometown of Kinshasa, while showing off his new found wealth he falls, as you would expect, for the resident gangster’s moll, played more than erotically by the sultry beauty Manie Malone. Added to the resident gangster’s displeasure, a group of Angolan gangsters arrive hot on the heels of their stolen swag and the setup is marked for a rollercoaster ride through the gritty back streets and glitzy nightspots of modern day Kinshasa. Add some corrupt cops, an equally corrupt lesbian army captain, some token witchcraft and loads of gratuitous sex and you have a recipe that would work in a Cineplex anywhere in the world.

What sets Viva Riva! apart, is its sense of place, a vibrant happening Kinshasa. Which is above all real, you feel that the director knows his subject matter intimately and if you look beyond the violence, which there is loads of, the movie conveys a genuine warmth for his hometown. Many critics worldwide have been tagging the film as African noir and yes it sure ticks those boxes, but there is an undercurrent of deep, dark humour, with in-jokes and cultural references, both local and Western, that gives the film more of an ironic overlay that owes more to Tarantino than it does to Chandler.

There is a serious side of course, poverty is everywhere and corruption is endemic and the plot line that money in Africa is the root of all evil is prevalent throughout. But behind the heavy handed beatings and callous characterisations there is a lightness of touch. It’s humour that brings the real point home. Projecting a self-effacing African take on the situation, power cuts and gas shortages are a recurring theme and one of the, many, stand out lines of the movie, sees one poor bit player when told in classic gangster style that they can make her assistance worthwhile, she replies with enthusiasm “What! Could you get me to Europe?”

This is no third world Scarface, frantic fierce and graphic it might be, but it has an African authenticity, a vicious honesty and fresh voice that makes Viva Riva! a cult classic in the making, a must see. Perhaps it even heralds a renaissance in African cinema on its own terms.