A history of brands and branding in South Africa

An exciting new addition to South Africa’s marketing literature come in the form of the recently published From Groot Constantia to Google: 1865 to 2010 – a colourful history of brands & branding in South Africa by Affinity Advertising & Publishing. 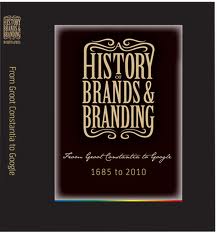 have also become part of the social history of the times, reflecting the fashion, art, literature, technology, health, sport and social norms of the day.”

So in short – they reflect us – what we hold dear and how we relate to the world around us. The book helps reflect the social zeitgeist before we had Google doing it for us. It also tells some of the stories of the characters behind the brands.

So we learn that the first female owner of Groot Constantia in 1724, Anna de Konigh, was the daughter of a slave, Angela of Bengal; SA’s first newspaper, the bilingual Cape Town Gazette and African Advertiser, or Kaap Stads Courant en Afrikaansche Berigler, launched in 1800, was owned by slave dealers and privateers Alexander Walker and John Robertson; and JC Juta, who founded Juta and Company in Cape Town in 1853, married Carl Marx’s sister Louise.

It’s a written timeline that stretches back 300 years, with a noticeable boom during the late 1870s when SA’s first trademark register was established in the then Cape colony.

Wilshere-Preston says the seed for the book was planted five or six years ago when he learned that the Companies and Intellectual Properties Registration Office (CIPRO – now the Companies and Intellectual Property Commission or CIPC) had an archive of original registration forms dating back to 1877. He realised that some record of our branding history existed and started digging and researching to find out more.

The intent of the book is to both entertain and to chronicle the history of branding in SA, says Wilshere-Preston and it is constructed around a timeline with brand profiles slotted in between. The book contains a 1000 images and mentions over 300 brands.

Wilshere-Preston says he was personally surprised that so many of todays’ great brands had such humble beginnings:

Zam-Buk is thought to have entered pharmacology through SA war field craft.

The book is closely tied to another of Wilshere-Preston’s projects, The Brand Museum, a project that seeks to establish a physical museum to showcase a wide range of branded product, advertising material, packaging and memorabilia. A venue in Rosebank, Johannesburg, is currently under discussion.

SA history, as well as its branding history, is affected by apartheid, and A History of Brands & Branding does address this era in the book. But Wilshere-Preston says this period in our branding history lacks proper historical research, though this will hopefully be addressed as the book inspires students of marketing to dig deeper into the past histories of brands, which will allow for a substantial expansion on this era’s coverage in the book.

Wilshere-Preston identifies Groot Constantia as SA’s oldest surviving brand. This has been the subject of some discussion online as critics argued that “Groot Constantia” did not exist “until van der Stel’s estate [the original Constantia] was broken up after his death, into three farms” – Groot Constantia, Klein Constantia and Bergvliet. They argue that ‘Constantia’ would be more appropriately identified as the country’s oldest brand.

The book offers our industry a written history and shows the evolution of professional brand-building. Brands suffer from ‘future mania’, says Wilshere-Preston, when a bit of history can give perspective to the longevity and success of a brand and serve to show current consumers its storied interaction with their predecessors.

From Groot Constantia to Google: 1865 to 2010 – a colourful history of brands & branding in South Africa (ISBN 978-0981419947) is available from selected bookstores or from lynn@brandsandbranding.co.za for R345 (including VAT).