Financial results for the first quarter of 2011 from some of the world’s largest ad agency networks are showing rapid growth in emerging markets. Increasingly, agency networks expect their future, and future profits, to be tied in with markets outside the US or Western Europe. The stars of the show? China and Latin America. Digital spend, also in emerging markets, is driving quite a bit of the growth as well.

Research by ZenithOptimedia recently showed showed that developing markets (everywhere outside North America, Western Europe and Japan) will increase their share of global ad expenditure from 30.9% in 2010 to 35.1% in 2013.

According to ZenithOptimedia, the Chinese ad market is expected to grow by 13.6% a year to 2013, nabbing it the number three spot this year in terms of ad market size. Brazil, meanwhile, will jump from seventh to sixth spot this year, thanks to annual growth of 15.4%.

WPP owns numerous international agency networks including Grey, JWT, Ogilvy & Mather and Y&R and media planning groups such as MediaCom, MEC and Mindshare, among others. It first quarter results for 2011 show organic growth of 6.7% year on year, with revenue at £2.2bn. 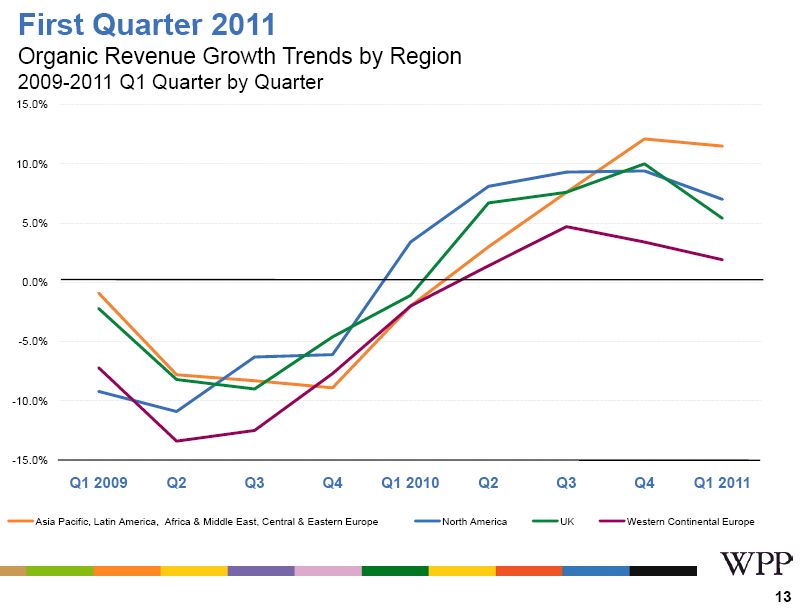 WPP reported strong like-for-like growth in direct, digital and interactive revenue in Western Europe, Latin America and Africa. Direct, digital and interactive revenues accounted for US$1.0 billion or 28% of total revenues in Q1 2011, up over US$100 million on the same time in 2010, and staff in this sector now make up 23% of WPP’s global headcount. Markets outside North America and Western Europe now account for 27.5% of WPP’s total revenues.

Sir Martin Sorrell attributed the strong growth to WPP’s growing strength in the BRICS (Brazil, Russia, India, China and South Africa) countries, as well as emerging economies such as Vietnam, Mexico and Indonesia, according to the Guardian newspaper.

Sorrell told The Guardian that his group will exceed US$1 billion in revenue this year in the Chinese market, with Brazil reaching US$650 million, India US$450 million and Russia US$200 million. Argentina and India saw revenue growth of over 20% and Brazil, Korea, Mainland China and Russia grew between 15-20%. (South Africa grew between 5-10%).

Rival Publicis Groupe, which owns Saatchi & Saatchi, Starcom, Razorfish and Leo Burnett, grew revenue by 10.7% for Q1 2011 to US$1.7 billion. It won new business worth US$1.9 billion during the quarter. The group’s digital business now account for 28.2% of total revenue.

“Digital business and business in emerging economies accounted together for 48.3% of consolidated revenue in the first quarter of 2011, a result in line with the group’s medium-term target of earning 65% of total revenue from these two growth segments,” according to Maurice Lévy, chairman and chief executive of Publicis Groupe.

Organic growth in China, Russia, India and Brazil reached 11.4% in the first quarter. Publicis achieved 8.7% growth in the Latin American region, a performance driven by Argentina (up 24.8%), Brazil (up 20.1%) and Venezuela (up 15.7%). The group will be focussing growth efforts on China, India and Brazil.

Publicis aims to double revenue earned in China within three years’ time and aims to see digital account for 35% of revenue and emerging and developing countries for 30% of revenue during the same period.

The Interpublic Group, the parent company of global agencies such as McCann Erickson, Draftfcb and Lowe + Partners, reported a revenue increase of 10.3% for Q1 2011. Revenue stood at US$1.47 billion for the quarter with an operating loss of $45.3 million.

CEO Michael Roth told TheStreet that growth was led by double-digit gains in Asia Pacific and Latin America. Excluding acquisitions, revenue for the group rose 18% in Asia-Pacific and about 14% in Latin America according to Reuters.

Other markets grew 11.6% organically reflecting strong performance in, among others, SA and Canada. The group employs 41 800 people.

Read the full story on BizCoimmunity