Tom of Finlands heads down South…

Tom of Finland, one of the newest perfumes by Etat Libre d’Orange, is making its debut in South Africa. Ogilvy Johannesburg is the appointed agency. The Tom of Finland perfume pays tribute to the fetish artist of the same name notable for his stylized homoerotic art and his influence on late twentieth century gay culture. 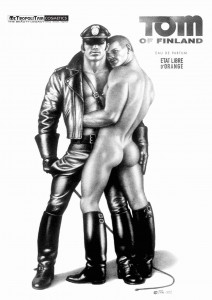 Launch events for Tom of Finland were held at several gay bars and the product will retail through Metropolitan Cosmetics outlets in Hyde Park, Sandton City and Melrose Arch. Ogilvy also has been tasked to introduce other perfumes in the Etat Libre d’Orange range – Jasmin et Cigarette (Jasmin and Cigarette) and Putain de Palaces (Hotel Slut).

The International campaign is quite something – Trendhunter calls the campaign extremely funny and naughty and “created by the twisted minds at Ogilvy ad agency in Paris.”