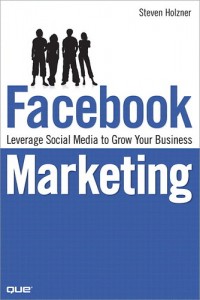 The fast-breaking storm of social networking has left marketers flailing about for shelter, a path to the calm in the eye of the storm, or at least a way to harness the energy in the turmoil. Some are turning to self-appointed experts, and some try to learn it as they go along. Somewhere in between comes a new guide to ‘Facebook Marketing’, with an umbrella of a sub-title that goes ‘Leverage Social Media to Grow Your Business’. Does it live up to its promises? Gadget editor Arthur Goldstuck tests it against the social weather.

Price: R226 recommended retail, but shop around for 10% discounts upward

Often, it’s what a guidebook WON’T do for you that defines it as much as what it will help you achieve. So let’s get one thing out of the way fast. “Profit from Facebook!”, as the headline on the back cover shouts, is not what this book will bring you overnight.

What it will do, on the other hand, is provide a practical roadmap through the basic use of Facebook as a marketing tool.

Down-to-earth, common sense advice, like “Become a part of the online conversation and don’t just throw up a display ad” (from Eddie Smith of SocialMediaNetworks) is not only sensible, but also applicable to any form of social marketing. It applies whether you’re using blogs, LinkedIn, Twitter, Plaxo or whatever comes next:  blatant marketing is the great destroyer of reputation. On Facebook, it can even get your account revoked. The “conversation” is the key to marketing in any of these gathering places.

Practical chapters on forming Facebook Groups, Pages and Events explain the differences between each, the benefits of each and when which one makes the most sense. Core advice for Page updates: “Add real content, not just spam”. Obvious for the initiates, but profound for newcomers.

Facebook Marketing comes into its own more than halfway through when it deals directly with what it calls “the meat and potatoes for many marketers”, namely advertising. This is one thing you don’t pick up vicariously while fighting werewolves or browsing YouTube videos on your friends’ walls. As a beginner in Facebook advertising, you really do need someone to walk you through the storm.

The difference between Ads and Social Ads on Facebook, how to create an ad, “start an ad”, choose an audience, and how to monitor and optimise the ad campaign, will make this show worth the entrance ticket.

However, if you plan to enlist the aid of the many instant professionals that have created an industry around social marketing, don’t pass this book onto them. They will be way ahead of the curve thrown out from these pages.

The same applies to a chapter on Facebook Applications. You’ll need a little more substance than this to venture boldly into the world of “aps”.

There are several irritations in the book, such as sloppy facts. In the introduction, Facebook has 42 million users. In the opening chapter, four pages on, it has 80 million users. We know it is growing fast, but not THAT fast.

Random insertions of useful advice – not related directly to the chapter where it appears – gives the book a fragmented feel. Paradoxically, these are also some of the most useful pieces of advice in the book.

And in one of those items lurks a hidden warning. Sunmit Singh, CEO of RootsGear, advises readers that there is a wide range of demographics to choose from, because “Facebook is at its peak right now”. The hidden implication (or, at least, this reviewer’s perspective on it) is that something else may come along soon to knock Facebook off its pedestal. As the next big thing arrives – and many believe Twitter is already that next big thing – Facebook may well lose both its impetus and its status as social networking leader.

The obvious message in that possibility is to avoid betting your reputation on the future of Facebook. But while Facebook remains top of the social networking pile, this book is a useful, easily digestible beginner’s guide to leveraging its strengths and negotiating its pitfalls.