by Veli Ngubane (@TheNduna) Now an award-winning copywriter currently at Joe Public, Tshepo Tumahole’s career kicked off after winning a copywriting bursary he’d heard about on YFM and being given a break by Ahmed Tilly (then at Black River FC). He hopes to share credits with an astronaut, zookeeper, mine worker and Doctor Khumalo one day.

Veli Ngubane: Tell us more about yourself: where did you grow up and what did you want to be when you were growing up?
Tshepo Tumahole: I grew up in Sebokeng, in the Vaal. Growing up, I really wanted to be Doctor Khumalo. I still believe he’s the GOAT (greatest of all time), not to mention his verse on Get Funky. Doctor has got the vibe.

VN: Congratulations on your big win at the Loeries. Take us through that night and what inspired the winning work for Chicken Licken*?
TT: First things first, God is amazing! I’m sure even creatives who have done so much better than me will attest to the fact that it’s such an honour to be recognised for your work. To be honest, what inspired the work was doing something that cannot be referenced to a piece created some time back or that won something in the 1800s. Coming together with everyone who helped to create what we believe was a fresh approach to South African radio was our biggest inspiration. We are blessed enough to work at an agency that allows its creatives to experiment and also to be working with clients who are willing to buy work that is unfamiliar. That on its own is inspiring.

VN: You’re a copywriter. How did you break into the industry — take through your career journey?
TT: A career in advertising is not something I thought I would be able to get into, mostly because I couldn’t afford to. I remember I had just woken up with the radio on when I heard that YFM had this competition in partnership with the AAA School of Advertising. There was a copywriting bursary up for grabs and I didn’t even know what copywriting was, but I entered the competition anyway. The first task was to write a radio advert about myself. I remember I had created this character that went to the Milan Fashion Week just to look for socks; I can’t remember the rest of the script but it helped me get through the first round, before writing more scripts to get to the second and finally the third round, where I was awarded the bursary. So, yeah, I took a chance at something I knew nothing about and here I am. It would also be amiss of me not to mention Ahmed Tilly. This is the first person to ever give me a chance and I don’t know how my career would have turned out if I had not met this amazing human being. I don’t know what you saw in me, Ahmed, but I’m glad you saw it.

VN: What is your opinion on the state of the advertising industry in South Africa?
TT: Based on the level of work I saw on [Loeries] night, it’s inspiring to see how progressive our industry is becoming. I just hope that, in a few years, we will start partnering more and more with people and creatives outside of our industry. One day I hope to have an astronaut, zookeeper, a mine worker and Doctor Khumalo on the same credits list of a Cannes [Lion] Grand Prix-winning campaign. I believe we need to start finding solutions from all sorts of different places, not just inspiration.

VN: What South African brands do you admire and why?
TT: The first one definitely has to be Chicken Licken. This brand has been the catalyst for great advertising — from the Joe Mafela commercials to the Joe Public commercials, it has made getting up during ad breaks quite difficult. The second South African brand has to be Orlando Pirates. I still envy whoever came up with the “Once a Pirate. Always a Pirate” line. That for me is one of the bravest brand promises I have ever seen from any brand. I wish we were still this brave as copywriters and I wish brands would stick to a campaign line for as long as Orlando Pirates has.

VN: How can the creative industry attract and keep more young black talent in the industry?
TT: Trust us; trust our ideas; trust our stories — we know what we’re talking about! I find that, many times, work needs to be similar to something else for it to be sold. As soon as something is too different, there’s some uncertainty and it becomes a tougher sell, which frustrates young, black talent.

VN: Why do you think the advertising industry is struggling to transform and what do you think should be done to fast-track transformation in the communications industry and in SA in general?
TT: I feel like transformation is being spoken about more than it’s being implemented. Transformation is not just in the numbers we bring into the industry but also in the work we produce as an industry. We still look to international standards as a way of judging our work! The day a South African agency wins big for an integrated campaign done entirely in one or all of our vernacular languages, with an insight exclusive to South Africa and a tone that is undeniably South African, then maybe we’ll catch a wakeup. Once work like that gets recognised, then we’ll have no choice but to start getting people who can do such work into this industry.

VN: If you had to give advice to your 18-year-old self, what would your advice be to young Tshepo?
TT: It hasn’t been that long since I was 18 but I would tell him to keep on challenging himself, keep on taking chances and yeah, you won’t like how Avengers ends.

VN: What advice would you give someone completing their high-school education this year and looking to follow a career in the creative industry or starting their own business?
TT: Never stop learning and never think of yourself as too young to do something. Whatever you set your sights on, you can achieve, especially in the creative industry. There are so many amazing people in this industry who will not only inspire you but will catapult your career.

VN: What do you feel is missing in the creative industry today and what should the future look like in SA and the rest of the continent?
TT: We are not keeping up or even setting tech-trends as much as we should be doing. We have proved to the world that we have the ideas and the stories; it’s time we embraced tech. I don’t want to just blame it on our budgets because we’ve seen great campaigns involving the latest technology done on minuscule budgets. We can’t always depend on international awards to show us how tech and the creative industry should form a stronger bond. We are already creating robots that stand in for us while we have Chicken Licken hot wings, so I guess it’s a great start.

VN: Where and when do you have your best ideas?
TT: To be honest, ideas come randomly to me but mostly when my eyes are closed. I tend to have to explain to people that “I’m not sleeping, I’m thinking” quite a lot.

VN: If you had a super power, what would you want it to be?
TT: Definitely read and control minds.

VN: Tell us something about yourself not generally known?
TT: Search for “Tshevs” on YouTube. Thank me later.

VN: What exciting projects are you working on at the moment?
TT: We are about to release Chicken Licken’s very first animated series. It’s still very much in production but it’s a project we have really enjoyed working on and excited to see how it comes out. 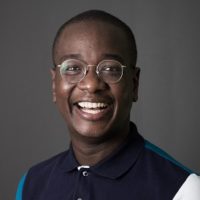 Veli Ngubane (@TheNduna) entered the world of advertising with a passion after completing his BSocSci (law, politics and economics) at UCT and a post-graduate marketing diploma at Red & Yellow, where he’s currently advisory board chairman. He also sits on the IAB’s Transformation & Education Council, is a DMA board member and Loeries, APEX, Pendoring, Bookmarks and AdFocus. He is the group MD of AVATAR and co-founder of M&N Brands, which is building an African network of agencies to rival the global giants. In his monthly column “Young, Gifted & Killing It”, he profiles award-winning, kick-ass black creative talent in South Africa.