by MarkLives (@marklives) Winners of the Radio, Direct, Glass, Print & Publishing, and Promo & Activation Lions were announced at the 63rd International Festival of Creativity on Monday, 20 July 2016. Radio received a total of 1410 entries — and 33 of the 91 winning entries are South African, including the Grand Prix. SA also has winners in Print & Publishing and Promo & Activation. Congrats to all!

The Grand Prix was presented to “The Everyman Meal – Coloured Weights” for KFC, by Ogilvy & Mather Johannesburg. The Grand Prix is Ogilvy Joburg’s second Cannes Lions Radio Grand Prix — it previously won one in 2014 for its Lucozade campaign ‘Teleconference’, ‘Kids Party’ and ‘Enrique Concert’ — and the second time that Joburg has brought home O&M Worldwide’s Grand Prix in Radio. This is also SA’s fourth Radio Grand Prix since 2009. 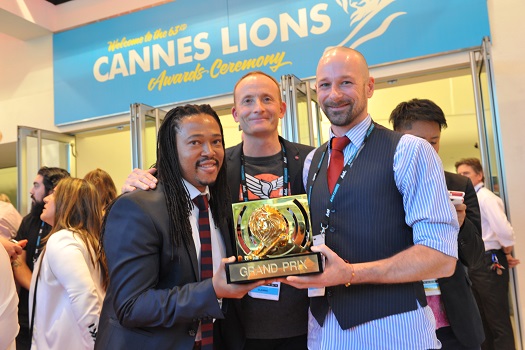 “The week in Cannes is all about being inspired to take the courage to go beyond what is considered possible,” said Pete Case, chief creative officer, Ogilvy & Mather South Africa last night. “And I’m filled with gratitude that the work awarded tonight has spoken for itself. Thank you to our clients and our people for their courage, and to the judges and Cannes Lions for this recognition.”

“Receiving the news that we’ve been awarded a Grand Prix again in Radio is beyond exciting and humbling,” emailed Mariana O’Kelly, executive creative director, Ogilvy Joburg. “Huge, massive, humongous, (screaming cat emoji) congratulations to KFC and to the creative team for being their brilliant selves. So proud of you!”

Sorted according to type of Lion, then category, then title.

From 3458 entries in Promo & Activation, 107 Lions were awarded. The Grand Prix was claimed by “OptOutside” for outdoor retail company, REI, by Venables Bell & Partners, San Francisco.

From a total of 3097 entries, 75 Direct Lions were awarded and “The Swedish Number” for the Swedish Tourist Association, by INGO Stockholm, claimed the Grand Prix.

The Glass: The Lion for Change award recognises work that positively impacts ingrained gender inequality, imbalance or injustice, and this year the Grand Prix was claimed by “6 Pack Band” for Hindustan Unilever, from Mindshare, Mumbai.