by Herman Manson (@marklives) Twelve people and Mike Abel sat on the floor of an empty office in Cape Town’s De Waterkant. The office had no furniture, his agency no clients and the great recession was in full swing. That was five years ago, on the first day M&C Saatchi Abel opened its doors, which officially happened on 1 February 2010.

Abel, returning from a successful stint in running M&C Saatchi in Australia, also faced considerable detraction from rival ad execs, who in typically South African fashion scorned him for leaving and then scorned him for coming back. His old agency, meanwhile, made sure everyone knew his restraint of trade was still in place… 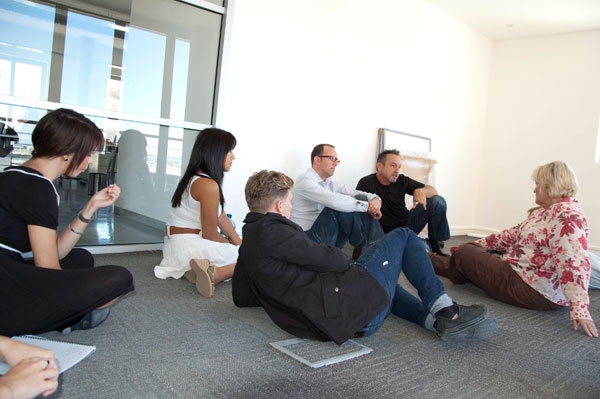 So isolated did the agency seem — and evidently feel — from the rest of adland that, when the now-defunct trade journal AdVantage dispatched this journalist to interview Abel in late 2010, the agency, invited to submit creative ideas for the cover image, sent an image of a black sheep…

It was promptly sent right back.

Which is just as well, as it turns out that the Lords Saatchi were more astute than the local trade when they gave Abel the nod to place his name next to theirs over the doors of their new SA agency. Or, as Abel quips, “In Australia I received a message from the lord [to launch the agency in SA] — the Lord Saatchi.”

A succession of business wins

Competitors often refer to the aggressive style in which the agency pursues clients, but it is obviously an effective tactic in an increasingly competitive agency environment.

Abel describes the enemy of advertising as ‘the expected’. The reasons clients employ agencies have evolved from ‘advertising’ to growing their businesses.

In another instance, ecommerce play Take2 was rebranded as Takealot.com. The problems that brand faced was less around communication, initially, and more about the lack of fast-delivery mechanism, as it had no effective network through which to deliver merchandise to consumers.

The agency introduced Takealot.com to Mr Delivery, which faced a significant lull in food delivery during non-meal times such as mid-morning and -afternoon, and so landed Takealot.com a distribution network. (The retailer has recently merged with arch-rival Kalahari.com but is retaining the Takealot.com brand.)

The agency has upped its profile at award shows as well, landing itself a Top 5 spot among South African agencies at both Cannes Lions (at no. 4) and then at the Clios. Tony Koenderman’s Creative Leaderboard for 2014 lists the agency in fifth place overall in South Africa.

It has achieved incredible award success — and, more importantly, street cred — with its Street Store project. A pop-up store for the homeless, the project aims to restore dignity to the homeless, and today a Street Store happens somewhere around the world every two days.

One agency, many offices

M&C Saatchi Abel is structured on a one-agency, multiple-offices approach — Johannesburg is already bigger that the Cape Town business and the group is in the process of constructing new offices in that city. It will also host a considerable selection of the group’s fast-growing African art collection. Last year, Jerry Mpufane joined M&C Saatchi Abel as group managing director for Gauteng, where he works closely with Gauteng CEO, Jacques Burger.

M&C Saatchi Mobile is the UK-based full service mobile agency that is part of the M&C Saatchi network and which launched in SA in co-operation with M&C Saatchi Abel in 2012. Today, the mobile business is led by the UK team in the local market. Abel says he believes it is going well but that he is not operationally engaged.

M&C Saatchi Abel services mobile needs of its clients through its digital teams, and media through Connect. Zeyad Davids, who helped establish the local mobile business, has moved on to become chief sales and marketing officer, Africa at Virgin Active.

Abel and his team has built a remarkably successful agency in seemingly record time and against considerable odds. Its relevance, in contrast to a few years ago, seem in little doubt, and its legacy will certainly not be represented by that lost black sheep wondering off the pages of a magazine in an industry wilderness.

“I think our growth has given us great confidence in our model and offering,” says Abel, when asked for his expectations for the agency over the next five years. “We believe that, as more clients become aware of our unique approach to collaborative problem-solving, we can look forward to ongoing and increased relevance — and a lot more opportunities to create remarkable change for our client’s businesses through impactful solutions.”