Ad of the Week with Oresti Patricios – a ‘secret gardener’ & the guy who installed swings all over his city, just for the heck of it

MarkLives Ad of the Week with Oresti Patricios – Crazy for Good

In a time when everything revolves around profit, corporate growth and return on investment, it’s good to see a campaign that goes beyond the obligatory corporate social responsibility gambit. But that’s exactly what Coca-Cola’s ‘Crazy for Good’ campaign seems to do.

And thank goodness this agency, Draftfcb,  refrains from ‘talking down’ to its market – yes, it’s predominantly a youth market, but gladly they didn’t spell it “kraz-E 4 gud” or some other form of text-speak.

[pullquote]The campaign is all about ‘passing it on’ – people who perform random acts of kindness for the good of society. It’s not a centralised, coordinated effort – rather it revolves around real-life stories that feature people doing a wide range of things to benefit their fellow human beings. This is what is so cool about this campaign – it is just about ordinary Joes and Janes with a passion which they use to beneficially impact on the people around them.[/pullquote]

The campaign is all about ‘passing it on’ – people who perform random acts of kindness for the good of society. It’s not a centralised, coordinated effort – rather it revolves around real-life stories that feature people doing a wide range of things to benefit their fellow human beings. This is what is so cool about this campaign – it is just about ordinary Joes and Janes with a passion which they use to beneficially impact on the people around them.

This global campaign, which was developed at Ogilvy Brazil, Sao Paulo, highlights these special, giving people, like Zainab Imran, the Pakistani musician who sings and plays at her local children’s ward… despite the fact that she’s visually impaired. What motivates her to give up four days a week to perform for children? “When I sing,” she says, “I feel that the children forget that they are unwell. When they sing and clap their hands, I forget that I’m unable to see.”

Then there’s San Franciscan  Jeff Waldman, who installed swings all over his city, just for the heck of it. He was given a $1000 grant by the city 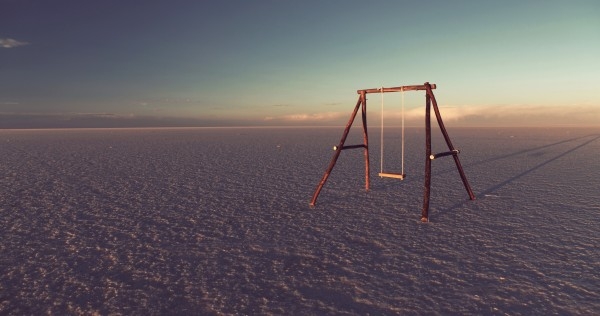 of Los Angeles to do the same there; then he ran a Kickstarter fund to hang swings all over Bolivia. They hung them from trees, buildings, rocky outcrops, and even in the Salar de Uyuni, the largest salt pan in the world (image source: Jeff Waldman).

On his blog, Jeff wrote: “What started last year as a conversation about the simplistic pleasures of swings has launched into a multi-city experiment in unexpected joy and cerebral happiness. Via contact info we left on the wooden seats we’ve received notes from those that used them, talking about … how their days were made better and how the emotions that emerged from stumbling across and using a random swing permeated their afternoon and infected those they came into contact with.”

The South African campaign has been as quirky as the international one. There’s the young lady who calls herself a ‘secret gardener‘. She identifies places in the city in need of greening, and then under cover of night—along with some volunteers—she plants trees, shrubs and flowers. She says she does it at night so that it’s a surprise for people the next day. “I plant trees because people need greenery around them,” she explains. “They can’t live in concrete blocks and towers – they need some nature, because we are, after all, part of nature.”

One case-study, who’s been doing his project for quite a while, is Tom Hewitt, who has become something of a local legend in his hometown of Durban, by teaching street-kids to surf. Some of them have gone on to become surfing instructors, lifeguards and surf-store assistants – Tom has had a real impact on these lives, saving them from crime, prostitution or early death. A short documentary was made of Tom’s story, which can be seen on YouTube.

Donnay Carter, brand manager of Coca-Cola South Africa said:“Tom’s documentary is so inspiring, it is a perfect example of what we are trying to achieve in this campaign. We want all South Africans to get involved in showing kindness to others and help us make big changes in our country through one Random Act of Kindness at a time.”

And then there’s the guy who came into a lot of money, who tries to give away R10,000 every day to ‘kind strangers’ – someone whom he believes can do something good with it. “My hope is that with that money and that person’s energy and ideas, some magic happens – and it does. The money has gone in all sorts of directions all over the world – more than I ever could have imagined.”

There is a commercial aspect to the campaign, other than the social equity of associating one’s brand with worthy projects. Coca-Cola has also run a radio/SMS campaign in the Western Cape – although I fail to see the connection. The campaign on Jacaranda FM was a notch above, inviting people to send in their stories of kindness. The cola ‘meisters’ also created an interactive site at https://kindness.coca-cola.com/za/ that invites people to upload their pictures and stories of kindness – of course, it’s linked to Facebook, so the aim is for it to have some sort of ‘viral’ growth.

But, in my honest opinion, that’s not the point. When corporate types complain that they don’t get a return on investment from their CSI projects, I remind them that a) they are getting a tax break on the spend; b) they can also get BEE points; and c) the point is not ROI, it’s doing good, for goodness’ sake.

Of course, if you’re clever, you can get some ‘brandwidth’ by associating with the right project and promoting it cleverly. If that means sending a film crew to watch crazy people doing crazy stuff, well at least one can hope that a few people are ‘turned on’ to do similar things. And that will make the world a better place. There’s your ROI.

Ad of the Week archive