Ad of the week with Oresti Patricios – For Doctors’ Ears Only

This week I want to tell you about an ad that cuts straight through the clutter to reach a niche group with an elegantly simple message. And the target audience is perhaps one of the hardest, most stressed, hard-working and difficult people to reach – doctors.

As everyone knows, South Africa’s public health system is not quite what it should be. For marginalised and rural communities, access to health services is (unfortunately) hopelessly inadequate. This is desperately sad because of the government’s good intentions and the fact that this country has a very competent minister of health. But despite good intentions and excellent policies, and fair budgets being in place, this country is missing a key ingredient to assuring better health care across the country – qualified healthcare professionals.

Approximately 35% of posts in public health are vacant. While equipment and buildings are often well-equipped, because of the lack of personnel, patients are under-serviced, outpatient facilities are crowded and long waiting lists are the norm. Conditions like these often put healthcare professionals off working for the public sector, so growing human resources within the public health sector becomes a bit of a Catch-22.

South Africa’s medical schools are world class, but of the 1200 doctors that graduate each year, half emigrate at some stage in their career. 75% of qualified doctors elect to work in the private sector, and of those who choose the public sector, the vast majority prefer to work and live in urban centres. Less than 3% end up serving rural communities.

Africa Health Placements (AHP) has the difficult task of recruiting foreign doctors to fill these much-needed positions in South Africa. To get the attention of busy doctors around the world, they needed to “speak directly” to them in a unique and powerful way. Rather than a brochure or letter that may end up in the bin without a second glance, AHP, together with strategic brand agency Boomtown, came up with a bespoke campaign to arouse curiosity and interest in potential recruits. Not to mention to cleverly penetrate a really difficult target audience.

The direct advertising appeal took the form of a package, delivered directly to the doctors. Even if their secretary opened it, there was a high likelihood it would be passed on to him. In the package was a plain wooden box containing a hessian “envelope”, inside of which was a card labelled “Place stethoscope here.” A pressure activated device triggered a low frequency MP3 that is only audible through a stethoscope.

Here is the “script” for the ad:

MUSIC/SFX: African style drum beat joins at the same rhythm and mixes with the heartbeat.

MVO: Do work that gets your heart racing. Africa needs doctors like you. Visit ahp.org.za to find out more.

SFX:    Fade out on heartbeat.

Simple.Effective.Targeted. And smart – which is important, because after all, the target audience are intelligent people AHP and Boomtown were talking to. Using an essential tool of the trade, doctors are given just enough information to raise interest and to drive their engagement with the ad. And then the mechanism which communicates the appeal is so considered that hopefully it drives a large percentage of potential volunteers to the AHP site. The homepage itself is well laid out: simple and stylish, with links to further information, a few inspiring first-hand accounts written by previous recruits, and an easy “call to action” in the form of a very short application form, or the option to email a CV.

The ad makers and recruitment brand clearly recognise that doctors are busy and have a lot of clutter in their lives, so this message acknowledges that, yet feeds on their curiosity and intelligence.

The ad won a silver Clio Healthcare award, which rewards creative excellence in advertising in the medical industry. As readers know the Clio is one of the world’s most recognized awards competitions for advertising, design and communications. High praise indeed. 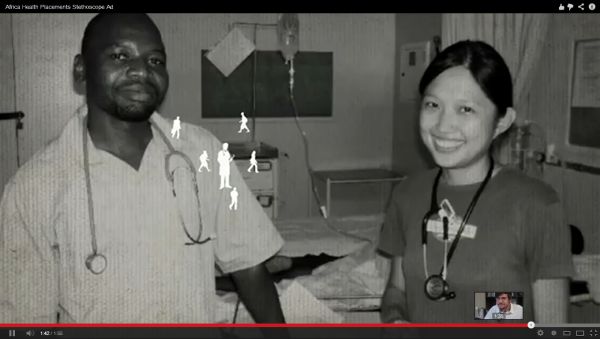