by Richard Lord (@rlord182) During July 2020, many more South Africans were able to go about their daily business —out-of-home media owners tell me that traffic levels climbed to 80% of what they were before lockdown began back in March. So, the highs of television viewing that we saw in April and May have come and have gone.

When various lockdown amendments were announced by our president towards the end of July, some 4.3m South Africans tuned in to watch his address on SABC 2. This was enough to give it a top 10 ranking of most-viewed programmes among all TV viewers in South Africa. 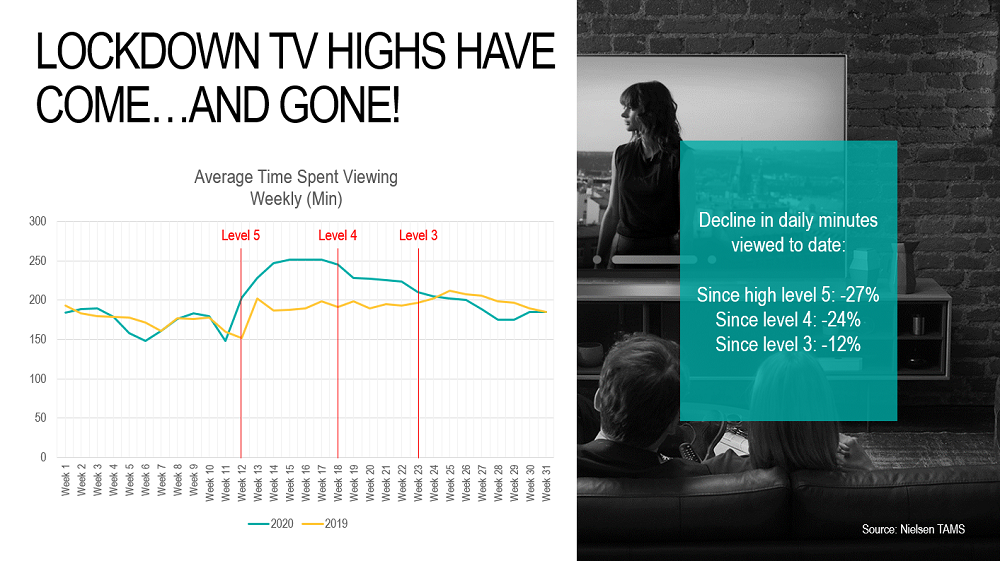 With consumer time spent viewing TV having dropped off so dramatically, what’s been happening with actual audiences? Let’s find out…

There has been very little change in the top 10 programmes watched by the main market in July when compared to June. Only two changes:

The only real change is the continued downward trend of the actual audience figures. We started to see how audiences began to drop off when Level 4 and then Level 3 lockdowns were introduced, and we’re seeing the continued further erosion of audiences. Let’s look at the top three programmes which demonstrates this trend nicely:

April saw the peak of the lockdown audience among LSM 4-7. However, we’ve seen a steady decline every month since. The Uzalo audience, for example, dropped by 5% in the past month, and has declined by 20% since the peak in April.

The top 10 among the LSM 8–10 audience has been more volatile, although we’re starting to see it settle down into a familiar pattern now, too.

Yet again we see the dominance of SABC 1, even among high-income earners. If this continues to surprise you, just remember that Sandton is not South Africa! Only four programmes in the top 10 were NOT on SABC 1. Mzansi Magic continues to be the only DStv channel to make the top 10. e.tv is back down to just one programme (Scandal) in the top 10.

As with the main market, audience decline continues to be a noticeable trend since the easing of lockdown restrictions…

The average audience of the top three programmes watched by LSM 8–10 has dropped by 8.5% in the past month, and declined by 20.5% since the peak in May.

Out of interest, the best-performing show on M-Net in the month of July was Carte Blanche, with an LSM 8-10 audience of 189 613 viewers. But is Carte Blanche a worthwhile media buy if you’re targeting an LSM 8–10 audience? Let’s do the maths…

The cost of a 30-second spot in Carte Blanche in July was R60 000 (rate card, no discounts). The 189k viewers equates to 1.74 rating points. This gives Carte Blanche an eye-watering CPP of R34 526 (a CPP is the cost to buy one rating point, and it enables us to compare the relative cost of two different shows). Let’s compare this with Uzalo, which we’ve shown reached 1 231 727 people in July. The 30-second cost for a spot in Uzalo was R206 870 (again, rate card rate, no discounts). The 1.2m viewers equates to 11.26 rating points. This means that the CPP for LSM 8–10 in Uzalo in July was R18 374 — comparatively half the cost to buy the same audience. So, which show is best for advertising to people in LSM 8–10? Of course, there are many factors to consider such as programme environment, audience aspiration, wastage etc. But all things being equal, and based on cost alone, couple with the actual number of people in LSM 8–10 that you can speak to, the answer seems pretty clear!

Richard Lord (@rlord182) is media and operations director at Meta Media, South Africa’s newest media agency and part of the IPG global network and Nahana Communications Group of specialist agencies. With over 20 years’ experience in the media industry and having worked for FCB, UM in London, and The MediaShop, he’s spent most of his career with IPG. Richard contributes the monthly “Watched” column, which analyses monthly TV audience viewership figures in South Africa, to MarkLives.com.