by Richard Lord (@rlord182) With more of the economy open and more people back at work in June 2020, we saw even further declines in television audiences and time spent viewing. It seemed that the ‘days of plenty’ that the TV broadcasters had experienced were now a thing of the past, and the numbers seemed to have returned to pre-covid-19 levels. 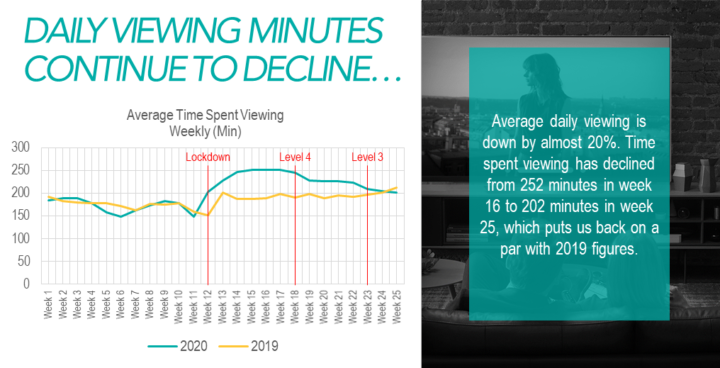 As we saw daily time spent viewing dropping, there was also a correlating drop in audiences as well… and quite a big drop, too. Let’s dig a little deeper…

But the biggest thing that the numbers have shown us — and we saw this in the daily time spent viewing data, too — is that, since people were back at work under level 3 restrictions, they didn’t have the time to watch TV like they had in the previous three months, and there was a big drop in audiences. Let’s consider the top 3…

But let’s not forget about the high-income earners. The last few months saw a shakeup among the top end. We saw the SABC 3 broadcast of the movie Contagion take the top spot in April; we saw the president’s various addresses sitting firmly in the top 10; and we saw e.tv programming fall out of the top 10 while local content on Mzansi Magic challenged SABC 1’s dominance.

But June brought with it a similar mix of programming, broadcasters and audiences that we saw back in March, before the major impact of covid-19 made itself felt.

e.tv was back with two programmes in the top 10. Mzansi Magic, which had four programmes in the top 10 in April, dropped to two, and SABC 1 rounded out the remaining six programmes. This, once again, highlights the misconception that many marketers have about what TV content the top end is actually consuming. We see very little DStv in the top 10, and no M-Net whatsoever. It’s very evident that high income consumers love local content.

We saw an equally large decrease in audiences as we saw among the main market, as evidenced below:

It’ll be interesting to see what happens in July with the reintroduction of an overnight curfew (and the alcohol ban).

Richard Lord (@rlord182) is media and operations director at Meta Media, South Africa’s newest media agency and part of the IPG global network and Nahana Communications Group of specialist agencies. With over 20 years’ experience in the media industry and having worked for FCB, UM in London, and The MediaShop, he’s spent most of his career with IPG. Richard contributes the monthly “Watched” column, which analyses monthly TV audience viewership figures in South Africa, to MarkLives.com.