Zeitgeist of Now: Post-literate communication in a world of memes

by Jason Stewart (@HaveYouHeard_SA) “Post-literate communication” is a phrase explaining how technology’s changing how we create and consume that information.

Ten years ago, we watched TV when we got home from work. We listened to the radio in the traffic, on weekends and even at parties. We read the newspaper and some magazines. All constant, predictable and repetitive. But, our consumption of information — media — has changed: we consume media almost continuously, from gifs and emojis to data visualisation, video, streaming, content highlights, soundbites… even disinformation. The structure of information is changing and becoming easier to absorb (and, instead of us consuming it, it’s consuming us) — more visual, shorter and powerful.

This was brought about by humanity’s adoption of the mobile phone aka cellphone. As texting (smsing) created easier ways to communicate, which ‘wnt frm slng & shrtcts to emojisJ’ and then to gifs or memes (which are able to convey more context, emotion and specific feelings in a quicker way than people can type).

This graph shows the increased popularity in South Africa over the past few years. 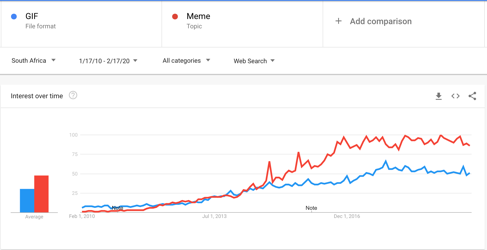 Interestingly, the top-searched gifs in the country predominantly speak to sex and relationships, and then humour (sexy gif, ass gif, love gif, funny gif), while memes are predominantly there to make us laugh (funny meme). Memes are also cultural landmarks of what’s grabbing people’s attention at this specific time. Their power is in their simplicity and the focus of what they’re expressing in a way that’s unambiguous and universal.

Just as in PR or media, it’s the soundbite that counts — the verbal headline that’ll be broadcast and shared and then reshared — rather than the whole message. Today, it’s the meme that counts. Just think back to Super Bowl 2020: Shakira’s tongue-wag meme was one of the most-shared and -memorable moments of the entire event. The meme is The New Headline.

A great way to illustrate the power of memes is to understand how Lil Naz has managed to ensure his song has spent the most time of any song on the Billboard 100. In late 2018 (when he had around 30 000 followers), he noticed that he could grow his account quickly by putting out memes, so he focused on doing just that. The problem was that, while his memes would generate 2 000 retweets, his song links would only generate 10. So, he started pairing his songs with memes — which is what he did with Old Town Road — and the rest is history. Here’s the original tweet:

We’re even seeing celebrities and brands trying to drive the life of a meme, such as Casper Nyovest, whose dance move became a meme. He then cleverly pushed it further by offering his fans R10 000 for the who can do the #GoodForThatChallenge.

The use of vernacular in memes has had a profound impact on how South Africans communicate and connect. The cross-language communication means that any South African understands what’s being said. For instance, Aisha Baker sharing this isiXhosa word meme: SBWL (sabaweli — “I WANT”)

Sbwl girls trip with my besties ?

The Sesotho phrase, “O Jewa Ke Eng” (what’s eating you) has also crossed language boundaries, as has “Re tsene”, a Setswana phrase meaning “we are within”, made famous by local personality, Bonang Matheba.

The use of vernacular by brands on social media isn’t something new. What is, is how it’s been used with visual expression such as memes and gifs. Where it fails is when brands are either forcing it or overusing it. This just comes across as being inauthentic and out-of-touch creating, and creates an imposter perception.

The attention/distraction economy means we’re continuously searching for three seconds of joy — and brain scans show that we do indeed get dopamine hits from our newsfeeds, specifically memes and gifs (which is why there’s a crazy diet in Silicon Valley called the dopamine diet — which includes not looking at social media to build up your reserves for one massive hit: ‘more, less often’).

Memes and gifs are here to stay and will continue to reflect the mood, state of mind and attitude of culture. They’re the perfect way to both gain consumer insights and engage in a powerful and relevant way.