by Jessica Evans (@JessRobinEvans) “Creativity is what we do — it’s our currency — but creativity needs to drive business success,” says Louise Johnston, recently appointed managing director at Grey Advertising Africa. “Grey’s collective ambition around this is very clear: ‘To be the world’s leader in applying creativity to solve business problems.’”

Johnston was inspired to move after being DDB South Africa MD for several reasons, one being “the quality of the creative product”, a reiterated theme at Grey. Their creative ideals also complement each other, making 2020 a year of promise for the agency.

“Our ambition is to be the most-progressive, -pioneering, -creative company in the world. To achieve that ambition, we must continue to attract the very best talent,” says Paul Jackson, Grey Africa CEO, adding that her experience and award-winning campaigns add value to Grey’s people and clients.

The feeling is mutual. “The idea of working alongside the experienced Grey leadership really excites me. I find their ambition for the agency both energising and challenging,” says Johnston, adding that the creative drive at Grey resonates with her. “Grey is on a mission to create the most-admired agency network on the African continent, with creativity at the core, and that’s a mission I want to be part of.”

Johnston has been in advertising for 26 years, beginning her career as an account manager before eventually switching to agency management —a natural next step. “I was given the opportunity at DDB to increasingly become more involved in the running of the agency, rather than just a portfolio of clients. When the previous deputy MD left, it was quite a natural progression then [to take] on an agency management role, first as deputy MD and then as MD,” she explains.

She attributes her current success to luck and persistence, saying that she was fortunate to receive “proper career-path advice” early on in her career. ‘Pestering’ others to mentor her also played its part. “With hard work and a lot of lucky breaks over the years, I am exactly where I envisaged myself to be today,” she says, a claim many are unable to make.

The advice she would give her younger self is this: “Surround yourself with people who are smarter than you. The more intimidating you find it, the richer the experience will be.”

Challenge is a recurring theme for her and another reason for her move from DDB to Grey. “I thoroughly enjoyed my tenure at DDB but had been there for over eight years and needed a new challenge,” she explains.

“I don’t talk about ‘resources’; I talk about ‘people’,” she insists. Creativity and people are the two pillars of her outlook, and she emphasises her desire to mentor people as she’s been mentored, offering them a future like her present: “I invest a lot of my time in mentorship and training because some of the proudest moments in my career have been watching young people [whom] I have nurtured over the years go on to do great things.”

Johnston’s time at Grey promises to be fulfilling in that regard. “In the short time I have been at Grey, we have already celebrated so much: our people being acknowledged; [the] winning of new business; cementing relationships with new clients; some fabulous new hires,” she says. “My hopes are that we look back on 2020 as our best year yet in every sense.” 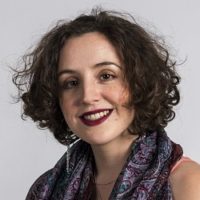 Jessica Evans (@JessRobinEvans) is a young writer interested in branding, marketing, health, lifestyle, environmental journalism and science communication. After completing her BJourn at Rhodes University, she turned her attention to copywriting and now works for HKLM Group as a content producer while also building a career as a freelance writer. In her spare time, she runs bite-sizedsci.com, where she aims to make everyday science more accessible. She is a contributing writer to MarkLives.com.