by Sabrina Forbes. “They talk about that ‘founders’ energy’, where working until three o’clock in the morning is not the worst thing in the world. That founders’ energy carried us for about the first 10 years,” says Simon Bestbier, CEO at Realm Digital, a digital strategy and technology partner providing everything from enterprise solutions to software as a service (SaaS), responsive ecommerce websites, mobile applications, and digital strategy.

Realm Digital was founded almost 20 years ago by current chairperson, Wesley Lynch, in the UK, sending development work to a small team in South Africa. Shaine Gordon, CTO, joined the company 16 years ago, followed closely by Bestbier 14 years ago. The three worked tirelessly to grow their client list from what they called rats and mice to where they are now, working with some of SA’s most well-known brands: Sanlam, Daily Maverick, Exclusive Books, T-Systems, Gondwana, MultiChoice, and African Bank, to name a few. 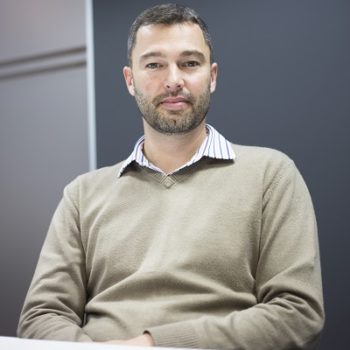 Bestbier isn’t shy to admit that running a business comes with a myriad dynamics and that it’s easy for business owners/entrepreneurs to allow fear to paralyse them. A milestone retreat with Realm Digital’s board members a few years into the business is what Bestbier believes really set the company up to be where it is today. The team members realised that, while they all really ‘know tech’, they’ve continued to make it for other people and decided to make something for themselves.

It was here that Snapplify was born. “It’s an educational technology ecosystem and the largest distributor of digital books. If you have a kid in a Gauteng school [who] is using a tablet, Snapplify provides the technology,” says Bestbier. Building up something like Snapplify, as well as a business like Realm Digital, continuously reminds the team that it has the skills and know-how to deliver great work, no matter the industry. “In the last 20 years, we’ve seen a lot of the guys we aspired to be disappear,” he continues. Snapplify and Realm Digital now run as two separate companies, with Snapplify currently in its second round of investment from Angel Hub Ventures.

The rapid growth of Realm Digital meant there was a quick succession of firsts for the company and Bestbier recalls the excitement of creating the first logo and moving into the first office. Even creating a letterhead for the company involved a big whiteboarding session. Then there were things like the first female hire and what that would entail for a business of only men at that point.

For any entrepreneur, the feeling of firing your first client is both terrifying and exhilarating, and not something you wish to do often, but one must understand the importance of doing what needs to be done. “Each of these things for a small development company are big bloody things,” he says.

Seen and done it all

After almost 20 years, the team has seen and done it all, and has learned the appropriate lessons: “For us, the last probably four years have been around realising that we need to de-risk the company a lot by getting the right people in place, having the right processes, and getting rid of the types of clients we don’t want on board,” says Bestbier.

When asked about company culture, Bestbier admits that it’s an increasingly tricky and fickle term, especially in the tech industry when you’re competing with the likes of Amazon. Everybody is looking for the best talent and sometimes free food and a pool table just won’t cut it. He believes that its less about money, free stuff, and cool gadgets and more about creating a team that pushes each member to be the best they can be. A culture created by its peers, not its leaders.

“There’s an idea that a good culture is going to fix anything. You can take a bad person and put them in a good culture; it’s not going to fix them. It takes a company to raise a staff member. It’s not up to the management or the CEOs to prune out bad habits. It’s about if there’s a poor developer on a team, that developer must feel uncomfortable because [they’re] not delivering,” says Bestbier.

Another aspect of the tech industry he mentions is how leadership experience and strength really come with time. Being given a high-powered job without earning it will always do less for you in the long run, no matter how shiny and lucrative it may seem. To effectively lead a team, you need to have been a part of one, at many different levels.

“The IT industry is particularly bad because you’ve got these young [people]  who haven’t started at the bottom and worked their way through the different levels where they’ve been knocked down and dusted themselves off. You’ve got these young [people] coming out of university with some Java skills or .NET skills, get given a R50 000 salary and all of a sudden they want to be running a team. They don’t have any of that substance that actually allows them to be useful to the business,” he says.

At almost 20 years old, Realm Digital admits that it’s been privy to every new buzzword faced by the tech industry, a lot of which have disappeared as quickly as they’ve appeared. It’s seen all the tech trends and, according to Bestbier, has found it frustrating that it has to add each new buzzword into its service repertoire in order to compete — especially when a lot of those trends don’t last very long at all: “We’ve seen all the changes in the industry. Sometimes we’ve been caught up in these cheesy buzzwords. You look at a presentation you prepared eight years ago and think, ‘I can’t believe I said that.’ Our core focus is about delivering value. We don’t want to be running around creating buzz around things that aren’t buzzworthy.”

Realm Digital’s main aim is to work with clients who view it as partners, not suppliers. It’s at this point where true, deep conversations and honest communication begin to happen. It’s here where the scary stuff can be said without fear of judgement or upset.

Bestbier recalls moments where clients asked for something they believed they needed — but didn’t — and where the difficult decision to advise them on going another route ensued. For example, there have been clients who’ve wanted a mobile app but should have been focusing on foundational tech before talking apps. Another client wanted something built with the ‘best tech’ but whose target audience was mostly using feature phones. Bestbier has experienced these sorts of disconnect many times.

“Often, in our pitches, we’ll say this is how much we think this is going to cost but we don’t think it’s the right way for you to be going. It’s been surprising how clients respond to that honesty. That creates a long-term relationship which is infinitely more valuable to us. I think it’s also about enforcing those boundaries. The moment a client starts treating us as a supplier, rather than a partner, we will nip it in the bud,” he says.

“You need that trust relationship”

“Clients will say, ‘Can you build us a Magento site?’ We respond, saying: ‘Don’t tell us about the technology; tell us about what you need and we will advise you.’ That’s one of the biggest problems in the industry today. There are technical decisions being made by people who shouldn’t be making technical decisions. You need that trust relationship to say we’re not going to build this for you; it’s a waste of time. This type of trust takes a bit of time to build up.”

Realm Digital was tasked with building the DStv desktop player, beating a well known consultancy* in the development pitch. According to Bestbier, it was probably one of the first Node.js webkit projects in the world and, without a doubt, the first in sub-Saharan Africa; up until then, companies such as BBC and Netflix had been working on their own desktop players. For almost a decade, Realm Digital has been looking after the Daily Maverick site and has also built the ecommerce solutions for Exclusive Books and KitchenAid. For Multichoice, it built an internal HR system allowing staff to track leave, view payslips, and update their personal data. It also worked with PwC to develop the Sanlam portal and mobile application.

Always looking to first figure out the problem that needs solving, imagining how to do it, and then building the solution is what Realm Digital strives for with each project worked on. “The technology part, what we do, is the easy part. Building technology is the easy part. Everyone can build an ecommerce website. Solving a business problem? That’s the hard part. If you can solve the business problem, the rest comes naturally. The scary thing is that in a lot of the meetings clients are having with their digital partners, the business problem is not even put on the table; it’s just build, build, build,” says Bestbier. “On all our projects, it’s the tech in the background we’re most interested in. The lifeblood of Realm is really building good technology. Building really good, scalable systems, and all that type of stuff.

*Updated 8 April 2019: Consultancy name removed as it was unclear whether it was an on- or off-the-record quote.