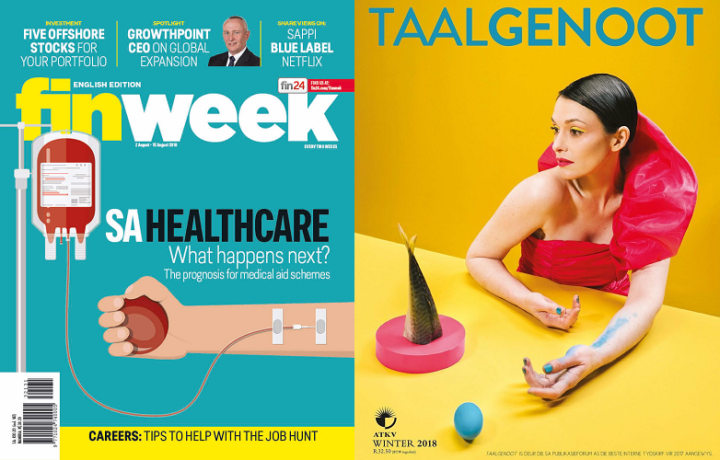 It may be argued that the history of discourse, art, design, and craft is a sequence of stolen or borrowed narratives, passed on from one generation to the next, reinterpreted, criticised, reformed, sometimes destroyed, and renewed as time goes by. But there’s a clear difference between appropriation and plagiarism, and a distinction between informed approaches, as opposed to ignorant ones, marking the separation of derivative work from authentic creativity. In short, there’s a line to be drawn between the trendy and the fresh, or ‘new’.

Recent covers of two local publications, Taalgenoot and FinWeek, prove just how easy it is to fall within the lines of the derivative and the overtly trendy, proving just how rare authentic creativity really is. The most-obvious example here is Taalgenoot, with its highly stylised, colourful, gestural, and posed art direction, which is already an incredibly tired and overused aesthetic, no doubt copying the incredibly popular work of established designer/art directors, Jessica Walsh and Leta Sobierajski. Perhaps, less obviously, the work of Phebe Schmidt and Lernert & Sander also comes to mind, among a plethora of other pioneers and their respective clones. In this sense, this cover is a cloned clone of a clone, yet another copy of a copy of a copy, stylistically arriving three years too late.

Maybe not so much a clone but more so a Frankenstein of sorts, the illustration on the cover to FinWeek doesn’t seem to have any clear connection to the subject of its headline: “SA healthcare. What happens next? The prognosis for medical aid schemes”. How does blood donation directly correlate with South African healthcare in the context of medical aid schemes? The message seems convoluted. The visual itself is basically a random mixture of derivative trends, with poorly executed 2D vector illustration. One could blame this lack of originality and authentic creativity on the tools at-hand, where designers rely too easily on their software or design inspiration sites to answer their creative woes. True creativity is, indeed, a scarce commodity.

The latest cover for Rolling Stone is a clear reference to Nirvana’s Nevermind album cover, first released in 1991. Many will recall the image on the cover of a naked infant boy, submerged, stretching for a sinking dollar bill with a fishhook stabbed through it, luring. Apparently, Kurt Cobain came up with the idea during a feature about water births on television, which he watched with Dave Grohl, the then drummer for Nirvana, now lead singer, songwriter and guitarist for the Foo Fighters, and part-time drummer for Queens of the Stone Age. Cobain proposed this idea to Nirvana’s record label and it had its art director develop the idea further. Extant stock images of water births were quickly deemed overtly graphic, hence the label hired photographer, Kirk Weddle, to shoot more ‘acceptable’ footage. Weddle found a suitable location at a pool for babies, and took only five shots, one of which ended up as the historic cover. There was some unease that the picture of a baby boy, named Spencer Elden, had his penis exposed. Despite the record label’s reservations, Cobain insisted on using the image, compromising by suggesting the use of a sticker to censor the image, accompanied by the statement: “If you’re offended by this, you must be a closet pedophile.”

Sans the sinking dollar bill on a hook, posing fully clothed with a guitar, American country music singer-songwriter, Eric Church, features on the Rolling Stone cover (credit: Joe Pugliese). There’s no doubt that the cover has shelf appeal but there’s only the thin veneer of the hardcore rock star lifestyle, hinting at a much trendier and commercial approach to rock music, as opposed to the scene that Nirvana represented. One can’t help but wonder how this cover relates to the original source of its inspiration. Overall, it seems a tad contrived: intertextuality in limbo, postmodernism past its expiry date.

A consciousness about sustainability and a respect for difference are important perspectives to have in a world that is increasingly becoming deprived of culture. Ambrosia is a magazine printed using carbon-neutral processes, with no advertising; it investigates food culture in various regions around the world. Pluralism is key, with each issue focusing on a new location, allowing readers to discover cuisine through engaging stories accompanied by photo essays. From Baja, Mexico, to the Bay Area, San Francisco, Ambrosia profiles several the world’s most-influential chefs, giving readers a taste of prolific restaurant scenes globally.

The current issue of Ambrosia, volume 5, travels to the San Francisco Bay Area, where the most-abundant fine-dining scene in the US is developing, fueled by an expanding collection of restaurants maintained by the growing migrant community in the region. A growing diversity of cultures and the sheer quality and volume of local produce are a few reasons for the San Francisco Bay Area to have developed into one of the dining capitals of America. This area of the west coast has historically been identified with gold rushes and cable cars and, more recently. Silicon Valley. But Ambrosia connects this history to the food culture of a region, exposing readers to the current identity of the Bay Area, from the invention of the fortune cookie to why a serving of sourdough bread, detailed on the cover, costs a whopping US$8. The cover sports an artfully shot image of a bread loaf, crowned by a succinct implementation of Ambrosia’s branding in the masthead. The magazine’s website can’t be ignored either; it’s clean and structured, providing users with access to content for all published issues. 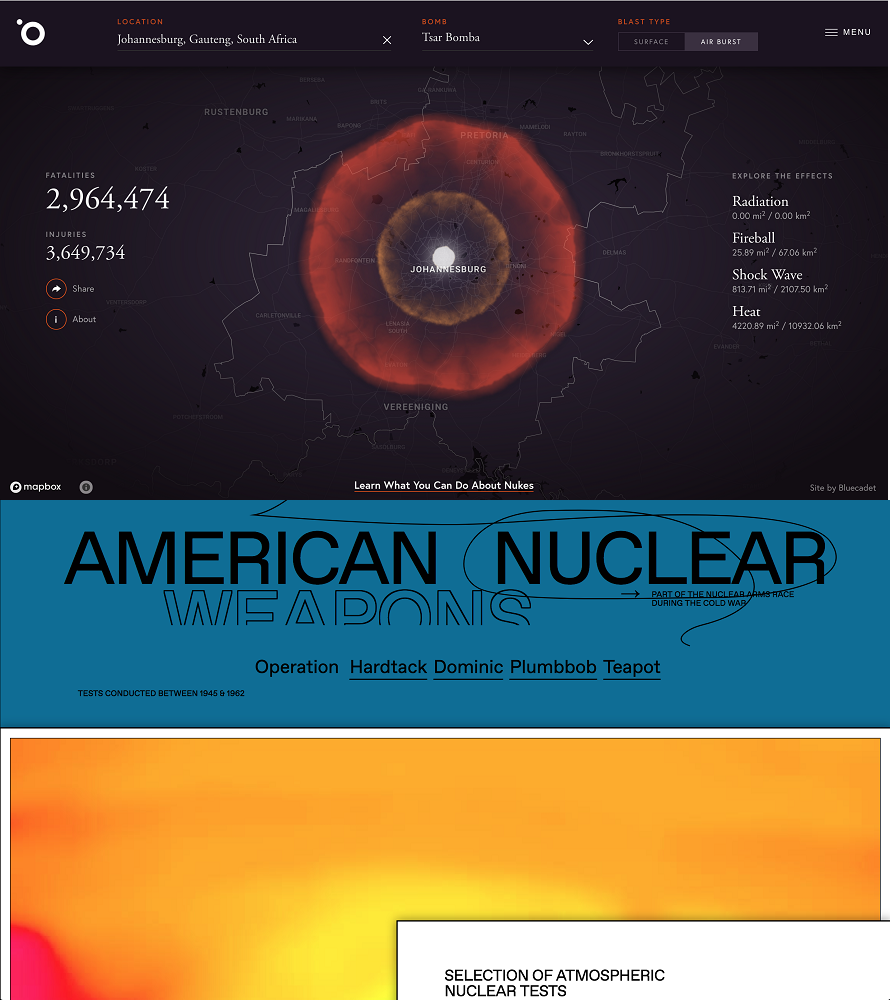 What would happen if a nuclear bomb had to explode above your city? A thought no doubt filled with fear and anxiety. Why do we rarely have the same reaction when it comes to the subject of climate change? A massive leap in thinking — political, ideological, social, philosophical, spiritual, et al — needs to happen for us to realise just how serious the situation truly is, intimately connected to our ongoing evolution in relation to the environment. One could relate the current environmental calamity to a variety of issues, including global over-population and the increased need for energy, coupled with growing consumerism, urbanisation and industrialisation, among a surplus of other related challenges connected to a variety of socio-economic and political issues. But climate change is real, proven by increased erratic and unpredictable weather patterns across the globe, including the extended drought in Cape Town, and it’s likely going to get worse. How may we reverse this situation when, as a species, we seem hell-bent on mutually assured self-destruction?

Nothing may be more indicative of this self-destruction than nuclear war. Outrider.org, in collaboration with Bluecadet, has attempted to tackle this difficult subject in an inadvertent way — by linking the challenge of nuclear weapons with the seemingly unrelated challenge of climate change. Bomb Blasts is an interactive platform that makes the notion of nuclear war personal, literally hitting close to home. Although the site incites a sense of fear and anxiety, it aims to steer users towards a vision of the world where humanity can exist uninhibited by the danger of self-induced obliteration and the catastrophic degradation of the environment. Bomb Blast is a searing reminder, allowing viewers to see the potential effects of humanity’s ability to destroy itself and the environment, hopefully motivating people to act accordingly. A related site, Nuclear Tests, provides an accessible and interactive account of some of the most-prominent and -historic nuclear bomb explosions in America between 1945 and 1962.

Both sites are beautifully designed, with powerful interactive elements, ‘pleasing’, usable interfaces and aesthetic data visualisations. Reverence and trepidation are words that come to mind when navigating through each site. 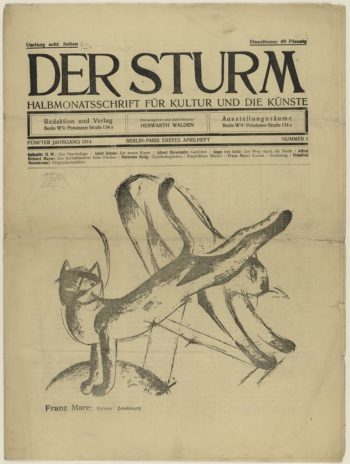 In previous columns, most of the influential avant-garde design movements have been mentioned. German expressionism is one historic school of experimental art and design that’s not. German for “storm” or “tempest”, Der Sturm was an experimental art periodical published between 1910 and 1932, associated with the German expressionists. Based in Berlin, the magazine resembled a daily newspaper, negating the attraction of other high-brow, glossy publications. It was founded and edited by expressionist artist, Herwarth Walden, who was inspired by a likeminded anti-conformist, avant-garde literary journal from Italy, called La Voce (Florence, 1908–1916), which was closely related to the futurist movement.

Originally, Der Sturm was published on a weekly basis but, by 1912. production was lowered to a biweekly print run, eventually becoming a monthly periodical. Used as a brand, the word “Sturm” effectively represented the zeitgeist of early modernism, specifically in Germany. The onset of World War I stunted the influence of the magazine but Der Sturm maintained its contribution to the Berlin-Paris axis of expressionist creatives. Aligned with the Cubists and Fauves (French for “wild beasts”) in France, and Die Brücke (German for “the bridge”) and Der Blaue Reiter (German for “the blue rider”) in Germany, Der Sturm helped to champion the avant-garde cause and formed part of a truly internationalist scene. The aim? To destroy old ways of thinking and defeat dated perspectives. Covers featured work by prominent artists within this avant-garde alliance, including Franz Marc, a prominent member of Der Blaue Reiter, on issue #1 of the 1914 volume. The last issue of Der Sturm was published in 1932, with World War II looming. Walden relocated to the Soviet Union, fleeing the Gestapo due to his connection to the avant-garde. He died in a Saratov prison in 1941, a casualty of Stalinist purges. World War II fascists simply couldn’t tolerate avant-garde tendencies.