Jacqueline Grobler, whose locally inspired gin brands continue to win awards alongside her new range of bitters, calls her product little bottles of love because of their ornate labeling. Shelf Life caught up with creative digital illustrator, Michal Shachman, to find out more.

Shachman’s initial brief was to create a craft-gin beverage logo and brand in line with the luxury synonymous with the Westcliff and Parktown areas of Johannesburg. The history of gold needed to be part of the aesthetic as the arrival of gin to Johannesburg came with the gold rush of 1884 and so the label design mandate was to marry these two ideas.

“The shweshwe pattern was included in the brief as a point of inspiration to draw from and I built upon the systematic repetitive value apparent in the construction of general shweshwe patterns, alongside my own fascination for illustrated abstractionism and progressive patternmaking.”

Working on the design for four months, Shachman says she was inspired by tribal designs, abstract art, generative art and calligraphy: “The gold reflects luxurious texture and real-world value as a traded commodity but its significance is also linked to the foundation that Johannesburg is built upon. The black is the perfect tone to work with a bright textured metallic surface and together they create a striking label that gleams and stands out on shelf — be it in retail stores, bars or at home.”

Shachman’s challenges came in the legibility of the title wordmark: “More challenges followed when I had to change my artwork to suit the printing processes, because only after printing could one see that the background was fighting with the title.”

A true labour of love for creative and owner.

Thanks to a ground-breaking hospital recycling project, which was initiated by the Southern African Vinyls Association (SAVA), non-hazardous intravenous infusion drip bags and tubing, made of polyvinyl chloride, are now being recycled into soles for school shoes.

Says Delanie Bezuidenhout, SAVA CEO, “We started researching the concept of practicing green health in 2010, but our proposals and calls to recycle waste from hospitals were met with lukewarm enthusiasm at the time. Fortunately, a lot of research on this topic has taken place locally and internationally since then, with numerous examples and case studies proving that it is indeed possible and economically viable for hospitals to adopt this approach.”

More than 40% of all plastic-based disposable medical devices used in hospitals are made from high-quality PVC, which is highly recyclable. By collecting and reprocessing products such as IV bags, oxygen masks and tubing, a minimum of 2 500 tonnes of locally recyclable material is diverted from our country’s landfills annually.

One of the first fruits of SAVA’s medical waste recycling drive was seen in Johannesburg this year, when roughly 1 000 school shoes were handed over to learners of the Masakhane Tswelopele Primary School in Zandspruit. “Thanks to funding we received from Adcock Ingram Critical Care, and the support of Netcare and the City of Johannesburg, SAVA trained hospital staff to separate non-hazardous PVC waste into blue-coloured bins.

South Africa is following the lead of countries such as Australia by taking a tough approach on plastics in the belief that this could create jobs in recycling, engineering and research.

Local tea rooibos — with a global consumption of around 15 000 tonnes per annum — received a mention in the most-recent edition of Marvel Comics’ She-Hulk, when psychiatrist Flo Mayer offered Jennifer Walters a cup of rooibos tea to calm her down. 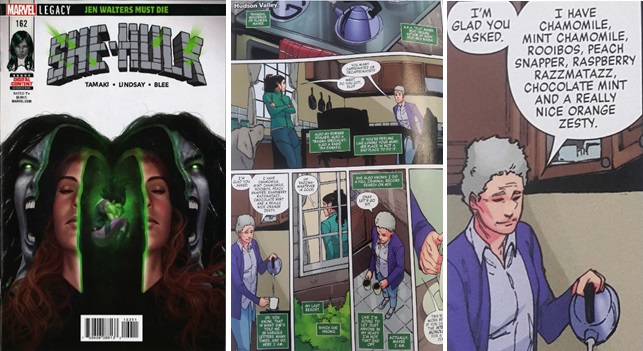 According to Adele du Toit, South African Rooibos Council (SARC) spokesperson, it’s a testament to how increasingly popular rooibos has become worldwide: “The fact that Walters is offered rooibos to calm her nerves is right on the money. Research done by several academic institutions, including Stellenbosch University, proved rooibos tea’s ability to alleviate stress and anxiety levels.”

If you’re curious, check out a copy of She-Hulk #162: Jen Walters Must Die, Part 4, Marvel Legacy to see our homegrown star in the making.