Ad of the Week: Feeling warm and fuzzy with Mohair South Africa

by Oresti Patricios (@orestaki) Rooftop, an agency/production company that works with NGOs such as UNICEF, has produced a friendship fable in the form of a heartstring-tugging marketing video for Mohair South Africa. What a winner.

Mohair is considered one of the most luxurious of fabrics. Soft, strong, versatile and a great heat insulator, mohair is a perennial favourite with top designers, such as Tommy Hilfiger, who showcased mohair in his 2018 Spring/Summer collection. The wool takes dye well and is also more lustrous and reflective than most other fibres, earning it the nickname ‘the diamond fibre’. This unique material is the product of Angora goats, and South Africa’s Karoo region is responsible for some 50% of the world’s mohair production. The local industry is supported by Mohair SA, a non-profit organisation that markets the South African product internationally.

Together with Rooftop and its director Nicholas Waring, Mohair South Africa has produced “Weaving stories for a lifetime”, a four-minute mini-movie to promote the brand. The advert, which tells the story of two boys who grow up together but are separated and then reunited after many years, is carefully woven through with the various stages of the material’s production.

Jack and Andile are two boyhood pals growing up together on a mohair farm in the mid-’80s. Jack’s father is the owner of the farm, and the story begins when Andile arrives with his father, who has come to work on the farm. The story is told with pictures, no dialogue, and a charming indie folk soundtrack created especially for the film by Charlie Finch. The lyrics are about friendship, and each scene shows the boys in different situations on the farm: playing in the fields, watching TV, roughhousing and working.

In one scene, Jack gives Andile a mohair blanket, and this blanket becomes an icon throughout the film. When the day comes that Andile’s father leaves the farm, we see Andile loading the blanket with his suitcase into the bakkie. He turns to look for his pal but he is nowhere to be seen, so sadly has to leave without saying goodbye.

Young Andile’s profile transitions to him as an adult, arriving in the city. He now has a job as a designer, while Jack is running his father’s farm.

Andile has chosen a hard path, working long hours to break into the industry. One night, he touches the mohair blanket draped over the back of his chair and becomes inspired. The scene cuts from Jack loading a bale of mohair wool onto a truck to Andile opening a box with the Mohair SA logo. The story then follows Andile as he designs his special collection, until finally he is given an invitation to show at the New York Fashion Week. The two friends have stayed in touch, and Andile sends Jack an invitation to his show. For the fashion show itself, the music transitions seamlessly to a high-energy track, still in the same key. The fashions showcase some of the textures that can be achieved with mohair, from soft woollen knits to tweedy suits. 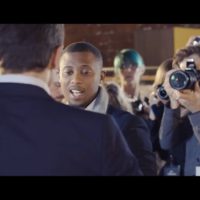 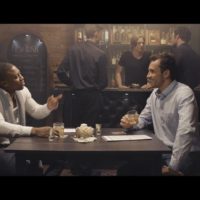 At the end of the show, Jack is there to congratulate his friend, and they are reunited. The mini-movie finishes with the two young men sharing a celebratory drink; at this point the lyrics of the song end with, “Let’s drink to the day I met you.”

The Mohair SA logo is accompanied by the simple slogan, “Weaving stories for a lifetime.”

Running at four minutes (without the end credits), the ad is not designed to be shown on a broadcast medium such as TV. In the social media space, however, brands are experimenting with longer forms that tell stories and engage, rather than pushing product. After the little movie was published and promoted, the Mohair South Africa Facebook page was filled with comments from people who said that the film resonated with them.

For a brand-building exercise, one could wish for little more: engaging with your target market means that they buy into your story, which in turn creates empathy and brand recognition.

The film is beautifully crafted, with stellar performances from the young boys, careful design, authentic locations, excellent cinematography and a charming soundtrack. Well done, Rooftop and Mohair South Africa — not even being swaddled in a mohair blanket would make me feel as warm and fuzzy.