Ad of the Week: Chicken Licken transcends language and culture

by Oresti Patricios (@orestaki) Joe Public United and director Alan Irvin of They Shoot Films continue with fast-food brand Chicken Licken‘s tradition for quirky commercials that are big on story. This time it’s a fantastical tale about a boy who just can’t seem to make himself understood by the people who love him most.

The fast-food chicken business is a tough sector to advertise in. So much of the work is funny; so many of the commercials are really good — which means that creative directors must feel a bit of pressure when new campaigns are briefed in. But Joe Public seems to be taking the heat in its stride because it keeps on producing sterling work for Chicken Licken, its client since July 2016.

Having taken the brand to space for the Hotwings product promotion and then to Egypt for some soul-searching, Joe Public has set its sights on a location almost as remote: Iceland. The result is a story that is both quirky and strange, and all the more funny for its straight-faced delivery.

“Icelandic Boy” takes the form of a beautifully crafted actuality film that explores an invented mythology. It tells the story of a young boy, Björgvin Rafnkellson, born in Vík í Mýrdal, a small seafront village in Iceland. We learn that this desolate place is known for its black beach and interesting rock formations, as well as that it’s built adjacent to a glacier that covers an inactive volcano.

Shot documentary style, with various ‘interviewees’ telling the story, young Björgvin’s family talks about how he started acting strangely and ‘speaking some weird language.’ The camera reveals Björgvin playing barefoot with his mates, who are all dressed up warmly. In a scene where his mother calls him for supper in Icelandic, Björgvin replies, “Ek kom, Ma!” which elicits puzzled expressions from his family who cannot understand a word he’s saying.

In a scene with a doctor, Björgvin identifies a picture of a banana as “piesang” and, when playing soccer, he lines up to take a penalty kick which sails over the crossbar.

In another scene, he’s built a braai and is cooking boerewors using a pair of snowshoes as a griddle.

Björgvin’s mother explains that the doctor believes that he has “memories from a previous life”. His sister comments: “He said that he has some condition, but I think he’s just weird.”

Everyone is quite typically Nordic in demeanor: pragmatic and taciturn. The little boy’s strange mannerisms are seen as something to be endured with stoicism and patience.

“And in the end,” the doctor says, “You will not be able to communicate with him anymore.” 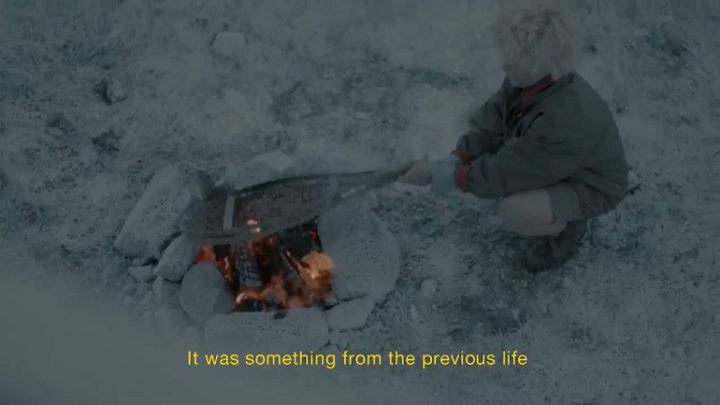 But, one day, there is a knock on the door. A stranger enters, bearing a Chicken Licken meal. It’s a new burger, dubbed “The Double Chik’n Boerie Burger”. Björgvin starts talking. The stranger responds. At last, the young Nordic boy has found someone who speaks the same language as him! The stranger is speaking isiZulu, and it appears that, with just one bite of Chicken Licken’s best, the youngster has a tongue for that language, too.

The premise of this story is fantastical but incredibly endearing. Imagine if all it took were the bite of a burger to appreciate another person’s culture and language. Imagine what worlds would open up to us if we could suddenly start speaking Afrikaans, isiZulu or isiXhosa.

Language and culture open up worlds and minds which is, in part, why I find this commercial so powerful. It works on so very many levels and is way more than just a laugh.

The commercial ends with the slogan, “For those truly South African at heart”, and this drives home the message that Chicken Licken is a South African brand with a connection to people that goes beyond mere borders. It’s national pride.

The filming took place in Iceland, according to publicity material from Joe Public, and this lends a tremendous amount of authenticity to the mock-documentary style of the ad. The cold and desolate village is captured extremely well, the filming accentuated by using a blue-grey look that only becomes warm when the Chicken Licken meal arrives.

It is such a beautiful, hopeful, wonderful story that is shot in the best cinematic tradition. The film work is very reminiscent of an award-winning Icelandic film I recently saw called Hrútar (“Rams”). If you haven’t seen this movie, I’d strongly suggest you do. But back to the ad. The performances are all very sensitively directed. The Icelandic people are ‘real’ people, and their interactions with the camera seem genuine; the slight stammers and accents also add an air of authenticity.