Ad of the Week: Absa Premiership turns up the rivalry

The world’s most-popular sport, soccer is played by some 250m people in 200 countries and, although the world’s attention may be on the qualifiers for next year’s FIFA World Cup in Moscow, back home in South African, we’re all about the Absa Premiership. The local tournament runs from August 2017 until the middle of next year, with 16 participating teams playing each other home and away. All teams get sponsored throughout the season, and the winning team takes home a whopping of R10m.

Absa has grabbed this massive brand-building opportunity with both hands: its campaign in support of the Absa Premiership is a masterpiece, and one that invites everyone to champion ‘the beautiful game’. The creative concept behind this TVC espouses the truism that competition can make us stronger. Or, as Absa says: “We’re turning up the rivalry this season in the Absa Premiership because, when rivalry comes alive, the game gets better.”

The ad starts with a shot of an ultrasound screen, and the baby in utero is seen kicking — but with one leg. This cuts to another screen, another baby who is also kicking. The scene cuts to the dads holding their respective babies. Over the dads’ shoulders, the two babies eye each other menacingly. What follows is a montage that portrays the two boys as they grow up, competing in various games, including street soccer, foosball, and even breakdancing.

The entire ad is set to a piece of electronic dance music with a township vibe, with the chorus “Woza nazo” — which loosely translated means “bring it on”. This is the punchline of the ad, and the slogan for the Absa campaign. 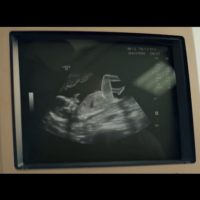 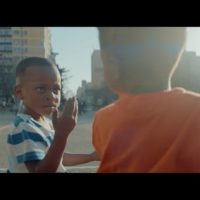 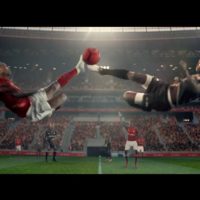 The montage ends with both players now as young adults clashing on the soccer pitch, on opposing teams. Both are flying through the air towards the same ball to make a spectacular flying kick. As they are about to connect with the ball, the screen cuts to red with the slogan “Woza nazo” flying on. The voiceover declares: “You know what makes us better? Rivalry.”

But does competition make you stronger? Here’s an interesting business insight that comes from China. CNBC reports that the president of Didi Chuxing, the largest ride-share app in that country, says competition is good for business. “Competition makes you stronger,” Jean Liu told the business news service. “We love competition. It makes you more focused.” Liu has become a global technology rock star after securing a US$1bn dollar investment from Apple.

But, when it comes to sport, competition is a no-brainer. Getting your kids onto the sports fields makes them both mentally and physically fit. Importantly, sports such as soccer teach lessons about teamwork, winning and losing that may endure a lifetime. Soccer is a great sport to build friendships around, regardless of whether you’re playing, participating, or watching the game. But it’s also all about being stronger — through cooperation. Ultimately, it’s through working together (like a glorious soccer team) that we all win.

Thanks to Absa, FCB and Figment for an inspired advert that will make you fall in love with the beautiful game all over again. As for the Premier League — woza nazo! The games have begun; let’s enjoy every single nail-biting minute of it.

— Sign up now for the MarkLives email newsletter every Monday and Thursday, now including headlines from the Ramify.biz company newsroom&nbsp:service!

One Response to “Ad of the Week: Absa Premiership turns up the rivalry”