Ad of the Week: Vodacom gives voice to the youth

by Oresti Patricios (@orestaki) Vodacom, Ogilvy Team Red and director Dan Mace of Egg Films provide a voice for the youth that’s not just for Youth Month (June in South Africa) but which will endure for some time to come. This is because the form the commercial uses is an authentic youth ‘language’ that is relevant and that resonates.

I’m a big fan of spoken-word poetry, in general, and Andrew Miller, in particular. “Poetry matters (even when you don’t like it),” he writes defiantly on Daily Maverick about the spoken form. He says that poetry — particularly spoken word — matters to all of us. “Poetry is a vital mechanism in our society, through which important conversations are held. Those working within the broad realm of development and education use it all the time, because it’s one of the most effective tools at our disposal. Whether you’re running a business skills workshop, a tertiary class on sexual violence or you’re simply working within the more conventional structure of the classroom, poetry is frequently a crucial tool of philosophical engagement. Kids latch onto it so easily, so practically, because it is threaded into their genes and their jeans; into the norms, nuances and modes of urban life.”

With Miller’s thoughts on spoken-word poetry in mind, I want to applaud Vodacom and its agency, Ogilvy Team Red, for a campaign centred on South African’s youth that gives voice, and an important platform, to spoken word. The campaign contains a commercial in the spoken-word form, and was posted online at YouTube just before Youth Day, alongside a handful of videos on the Vodacom channel featuring local female beat poets.

The TVC, entitled “This is Your Time 4 (#TIYT)” spells out a message of disruption and youth empowerment, in a monologue spoken by a young schoolgirl. The video starts with a closeup on her face. The camera tracks back to reveal her environment, wearing a school uniform. In voiceover, the young girl says: “Look at me. What do you see? You see a poor girl living in a shack.”

A flash-cut sequence takes us to the young girl sitting with some friends. Angrily, she asks: “How dare you? How dare you put me in that box?”

The flash-cut sequence then moves to the inside of a taxi, where the young girl says, “I am a poor girl, living in a shack. But my situation will not hold me back. I’ve got dreams and hustle and a 20-year plan. A whole universe of knowledge in the palm of my hand.”

The visuals that accompany this move from an office block to a library and a cell phone, emphasising the importance of data-based technology for education. Youth Month also saw the launch of #internet4all, an undertaking by the government to have internet available for all SA citizens by the year 2020. This programme will no doubt involve the cellular providers, and the hope is that internet access will not only be ubiquitous but also affordable. 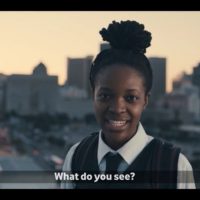 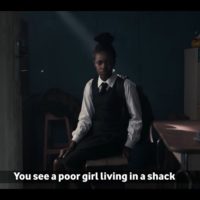 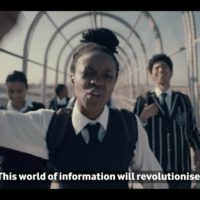 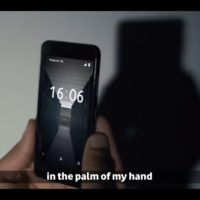 The NXT LVL packages that Vodacom is offering, which also target the youth, are a start. An app provides low-cost access to music videos, based on duration rather than data consumption. One may only hope that this will be extended to educational material, too.

Getting back the ad: the scene cuts to an exterior, where the young girl is standing on a crate, yelling “Watch me rise! Rise! Rise! Say that again! Rise, rise! Can I get an amen?”

A little child passing by with mother yells: “Amen!” in response. The young girl smiles and continues her soapbox speech: “‘Cos in our hearts is an ambition so woke, alive and beating with the words the ones before us spoke.” The scene cuts to a flashback of a poster and an animation depicting the Soweto riots.

The final scenes take place on an overhead walkway, and the roof of a building at sunset, with the city in the background. The young girl continues the spoken-word poem: “This world of information will revolutionise! Lift us up, one by one, and open our eyes. And the magnificent thing is, there are millions of us, just like me. Now ask yourself: What do you see?”

The screen fades to black, with the text, “This is your time,” which transforms into the hashtag #TIYT. The #TIYT campaign is currently calling for vocalists, DJs, hip-hop artists and bands, between the ages of 18 and 24, to enter a competition that will pair five finalists with established artists who will take them through a 10-week ‘boot camp’ to help them develop their talents.

The cinematography in the ad is moody, with a blue-grey grade that is reminiscent of dawn light. Many of the scenes are shot at dawn or sunset, and mostly in the city, which hints at a ‘high-tech’ solution for today’s youth. The subdued palette also acts as counterpoint to the young girl’s energy and enthusiasm.

Now let’s end with another insight from Miller: “Poetry works where other devices fail precisely because it evokes the metaphorical power of creativity, while also harnessing the seldom utilised power of empathy.” And that is also what makes this commercial work so well. In a context where everyone’s trying to court SA’s youth, often with clumsy irrelevant outreaches, the Vodacom campaign works because it speaks a language that’s real and relevant.