Ad of the Week: Assisting where needed

by Oresti Patricios (@orestaki) Time to bust out the tissues with a heartwarming mini-movie from Vodacom and director Dillon Govender of Admit One Media about how special phones may empower people with specific needs.

I have always feared losing one of my principal faculties, such as eyesight or hearing. Perhaps many people have this fear. For me, it’s about the loss of independence, and how it would hamper my ability to do the work I love, which is in brands and various media. At the same time, I’m always blown away by how people do find ways to cope. It’s such a testament to the human spirit when someone overcomes this and lives a meaningful and fruitful life.

Of course, technology is becoming more and more useful in providing assistance to people with specific needs. It’s no wonder that the ubiquitous smartphone is becoming the device best-suited to delivering that technology conveniently. Vodacom demonstrates the company’s commitment to being all things to all people with a series of ads that tell stories of how real people are being helped by assistive cellphone technology. There are special phones for the sight-impaired, hearing-impaired and even for the elderly that are designed to make life easier and empower people to do the things many of us take for granted, such as special text-only plans and assistance with choosing phones that are compatible with hearing aids, as well as a range of iPhones have software that gives voice guidance and takes voice-based input.

The campaign consists of one main commercial, “Joseph and Thandi” — a fictional story of a romance that has all the makings of a Romeo and Juliet story— being flighted on TV, cinema, internet and in-store, and another six which are actual real-life stories (no acting) and are online only.

In “Joseph and Thandi”, the two star-crossed lovers were sweethearts in their youth, but her father wasn’t having any of it, and forced them apart.

In this narrative, Joseph is a sculptor, and we soon learn that he is blind. His friend, the narrator, is also blind. The mini-movie begins in an airy studio where Joseph is working on a clay bust of a woman. The narrator recounts how Joseph would tell the story of his lost love over and over again. “He never forgot her face,” he says in voiceover. “I knew their story couldn’t end like this. No matter what it took, I had to find her,” he continues, and we next see him walking down a city street.

He pulls out his cellphone, and all he does is swipe across the screen. Superimposed on the image is the cellphone screen, showing “Voice Search”. The words “Thandi Molefe Artist” appear as he speaks, and the info comes onto the screen. There is a montage of the narrator as he makes his way across the city, guided by the voice coming from the phone.

“Sometimes even the greatest love stories need a helping hand. And this story deserved one more chapter,” the voiceover continues, over scenes of the narrator speaking to someone in a restaurant, walking through Joburg CBD, and resting on a park bench.

It’s getting late but still he persists. He is at a bus stop, and the screen shows the Vodacom Specific Needs Contact Centre, which has its own number. The voice may be heard saying, “The next bus arrives in one hour, sir.”

It is now night time, and he arrives at a door with a brass number, which his fingers identify as the right one.

As the door opens, the scene cuts to the door of the studio being opened, and Thandi places her hand on Joseph’s shoulder. It is a very touching moment as she looks into his face and he touches her face to ‘see’ her; then they embrace. Our narrator stands by and smiles, and it is clear that the bust Joseph has working on is of Thandi.

The Vodacom voice says, “Write the next chapter with South Africa’s best network. Vodacom”, while the text on the screen gives the URL for the network’s special needs website. 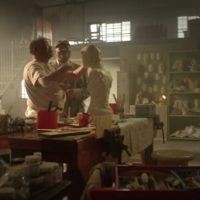 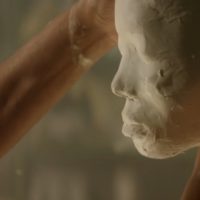 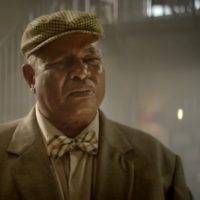 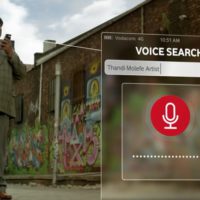 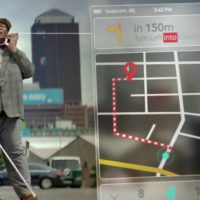 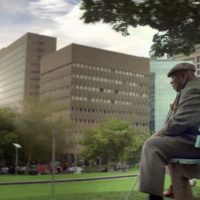 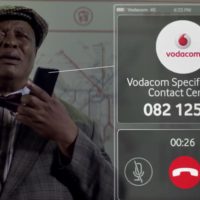 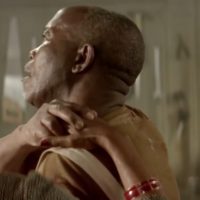 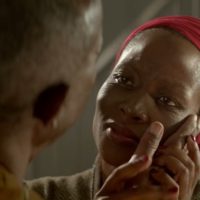 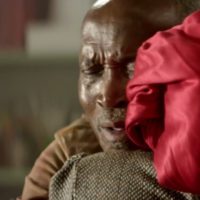 This ad is beautifully filmed, and the story is touching and inspiring while still providing information about the service.

Other stories in the series are more documentary in style, featuring people such as Andile Vellem, the deaf choreographer; Hein Wagner the blind adventurer/athlete, and Joseph Matheatau, the blind barista. Exceptional people all, who have not let their disability be an obstacle but have found a way to follow their passion and live life to the full.

Kudos to Vodacom, not only for this initiative but for telling these heartwarming stories, and to Admit One for filming it in such a sensitive way. Deserving winners of Ad of the Week.