Ad of the Week: Don’t quit your day job

by Oresti Patricios (@orestaki) Heaven knows, these days we need something to laugh at. Thankfully, cider brand Savanna knows just how to do that and the latest ad, from Mirum South Africa and director Daniel Albertse of Bird On A Wire, has just landed. It is funny. Dry. And wonderful.

Comedy sells. Because everyone loves to laugh. And, with the onslaught of bad news rushing in thick and fast from all corners of the globe, what we need now, more than anything else, is mirth. Modern comedy is also about more than just making people laugh; it’s often a powerful force in examining society — be it politics, attitudes, fashion, religion or whatever — holding up our culture for criticism and introspection. And it can actually make a difference, because it’s done in the ‘safe space’ created by laughter.

Distell brand, Savanna Cider, has made comedy an intrinsic part of its brand identity, capitalising on its association by not just being funny but by supporting local standup comedians. In 2013, Savanna not only started sponsoring the Annual Comics’ Choice Awards but became the headline sponsor of this respected initiative. Now in its seventh year, the Savanna Comics’ Choice Awards are opening up to the rest of Africa for the first time, and the inaugural Savanna Pan African Comic of the Year award will be presented at the final ceremony this year in August 2017.

Comedy is seldom thought of as a cultural event in this country, and South African comedians don’t have it quite as good as some US comedians — unless you’re Trevor Noah and you get poached by The Daily Show. That’s why it’s so great that Savanna has committed to backing comedy in SA: we need insightful people to say what needs to be said without letting us fall into a spiral of depression and despair.

The web commercial that we’ve selected this time as Ad of the Week,  “Savanna Newcomer Showcase — Hostage Negotiator”, is being used to publicised one of the events that are part of the run-up to the main awards — the Savanna Newcomer Showcase, which will decide on who gets the Newcomer of the Year award in August. Twenty-four new comics have been invited to do their schtick in front of an audience at the Soweto Theatre on Sunday 28 May.

The ad features last year’s newcomer winner, Ebenhaezer Dibakwane, who plays the part of a hostage negotiator. With him are two hard-boiled cops, one in plainclothes and the other in a SWAT uniform. The filming is done very much in the style of cop dramas of recent years, with hand-held camera and narrow depth of field 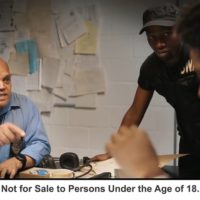 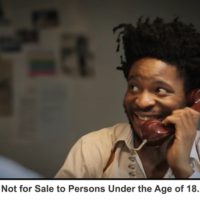 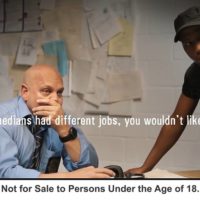 The phone rings: it’s the kidnapper, and the negotiator answers. The plainclothes detective puts on headphones to listen in. “Here are the rules. I want five million dollars. And don’t ever disrespect me,” the voice says, heavily distorted by a pitch-shifting device.

“I would never disrespect you,” says the negotiator, while the other two look on. Then he adds: “Lord Vader.”

The other two look on horrified as the negotiator carries on with a series of Star Wars jokes, ending with: “What do you need the five million dollars for — a new lightsaber?” At which point the kidnapper hangs up. “I think he might have needed the toilet,” says the negotiator, awkwardly. Dibakwane’s performance is intentionally over-the-top and silly, which makes the cops’ reactions all the more amusing.

The two cops are dumbstruck, and the title appears on the screen: “If comedians had different jobs, you wouldn’t like them.” This is followed by an end-board featuring Dibakwane holding his award, with the title, “Thank goodness comedy is a full-time job.” The details for the event are also on the end-board.

It’s a great little set-piece, with the casting of the deadpan cops a perfect foil for Dibakwane’s cringe-inducing antics.

Here’s hoping I can still get a couple of seats at this year’s Newcomers Showcase — it looks like it’s going to be a blast. And cheers to Savanna for the laughs and everything it continues to do to promote local comedy.