Ad of the Week: Making a song and dance about insurance

by Oresti Patricios (@orestaki) Do insurance companies think their clients love the way they are treated, or do they even care? Net#work BBDO, Gentlemen Films and Virgin Money Insurance take a ‘snarky’ poke at the rest of the industry but promise to do better.

This heavily contested local industry has seen the big disruptor enter the market. Branson’s Virgin Money Insurance (VMI) was launched in South Africa at the beginning of October this year, in partnership with global insurer, American International Group. (AIG). (Incidentally, this isn’t the first time Virgin’s tried to crack this tough nut. In 2010, Virgin Money SA (VMSA) entered into a partnership with the Telesure Group to market short-term insurance, but that agreement came to an end. This is what is behind the Virgin insurance decision to rebrand and relaunch the product offering, with a new partner.)

The Virgin brand is synonymous with challenging the status quo, and this spirit is embodied by its founder, maverick entrepreneur Richard Branson. This challenger ethos is carried across the Virgin brands’ messaging, and the ad for VMI is no different.

The TV commercial was created using the format of musical theatre but with a wonderful tongue-in-cheek approach. Each scene becomes more and more ridiculous, illustrating how insurance companies purportedly see their customers (according to VMI). 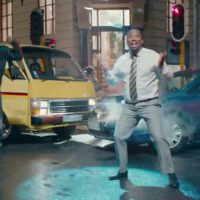 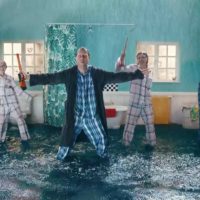 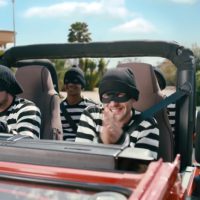 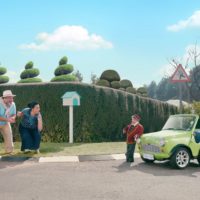 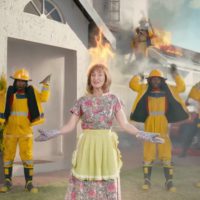 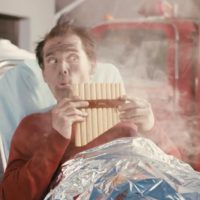 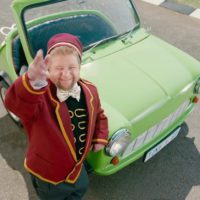 In the opening scene, an accident between a taxi and a sedan has just occurred on a city corner. The camera cranes down in the style reminiscent of a Hollywood musical, and a spotlight comes on as the driver of the car bursts into song: “What a lovely day for you to hit my car/This is going to cost me quite a lot/even though it’s not my fault/Oh, I love insurance!” During this, both drivers dance in unison.

The next scene is of a family dancing in a house that’s been flooded. “Oh, how I love that my insurance won’t help me tonight/We found a hidden clause/Give a round of applause/We love insurance!”

The following scene is of a woman whose car is stolen, and the replacement that arrives is “the teeniest, tiniest car you’ve ever seen”. (It’s so small a tiny person has to deliver it!)

A song-and-dance featuring a woman with an apron and oven mitts outside her burning house is next, with firemen providing the chorus line. She sings about what fun it is to phone her insurance company and listen to her “favourite hold-music forever and ever”. In this scene, the woman’s hair is on fire, and her husband is playing the panpipes.

The grand finale brings all the cast members onto the street for a chorus of “I, I, I love insurance.” The announcer provides the punchline: “Insurance companies think you’re like this. We’re not like insurance. We’re like you.” This is followed by a call to action: an SMS number for people to immediately get a quote as well as the Virgin Money Insurance logo.

It’s the quirky little touches that make this ad so funny — such as dentures in a glass saying “Oh, yeah!” during the flooded house scene, and the woman’s hair that stays on fire right to the end. Then there’s a skeleton in a lounge chair holding a phone, saying, “Still on hold.” This applies to the sound mix, too: the audible ‘click’ as the spotlight gets switched on is just perfect.

The musical piece is pure Broadway musical, with the lyrics in each scene pointing out (albeit sarcastically) an aspect of the insurance industry that people hate (but that insurance companies think people love). The exaggerated moves emulate the traditional dance musical, and all the performers have the same crazy smile on their faces, underscoring the sarcasm of the lyrics they sing.

The filmmakers clearly paid close attention to detail. The colours ‘pop’ like a Kodachrome 1930s movie, and the art direction complements this with perfect colour-coding throughout. It is a real pleasure watching a television commercial that’s been so finely crafted.

A musical may not be an obvious choice for selling insurance, and humour is rather risky when dealing with a serious topic, but Net#work BBDO and director Greg Rom of Gentlemen Films have pulled this off with aplomb for challenger brand, Virgin.

Who knows, perhaps it will even inspire some other insurance companies to start treating their customers a little better?