Ad of the Week: I want to break free

by Oresti Patricios (@orestaki) DDB South Africa continues to reinvigorate the Telkom brand with a campaign that pokes a sharp stick at the competition.

Mobile network operators have a lot of cheek, let’s face it. They have a virtual monopoly and we, as customers, (and so dependent upon their product) mostly just accept it. Take itemised billing, for instance. Imagine what would happen if you charged your customer to give them an invoice that detailed their purchases? (Or if your corner grocer did that to you?) How about if you insisted your customer take a ‘bundle’ that included things they don’t want or need, but they have to pay for indirectly anyway?

Telkom has expanded its coverage through a deal with MTN, and its competitive offerings have lured many new subscribers, especially (but not exclusively) in the lower-income groups. That being said, it still has less than one tenth the users that current market leader, Vodacom, has. So, this mobile ‘David’ is taking on the cellular network ‘Goliaths’ and, to do so, it needs to be innovative and assertive in its offering (ironic, given that Telkom used to own a large share of Vodacom, but sold this in 2008 to Vodafone, a move it later admitted was ‘a big mistake’).

Which brings us to Telkom FreeMe, a cellphone contract that offers many of the things one normally pays for as part of a bundle, for nothing. It’s very much structured around data – the bigger the data bundle you sign up for, the more you get free. But, even if you only buy a 1GB contract, you still get free itemised billing, free calls to Telkom cellphones and landlines, free instant messaging (such as WhatsApp) and free texts. Sounds like a sweet deal, even though data still doesn’t ‘roll over’ if unused, and there are ‘out of bundle’ issues, both in terms of costs and inconvenience.

The TV campaign that sells this product is based upon three absurd situations that take place in what would otherwise be normal, everyday transactions. The first one to catch my eye was called “Drive Thru”. It features an epic transaction between a customer and what seems to be an automated order-taking system, which is housed inside a fibreglass model of the (fictional) fast food outlet’s mascot, a cheerful character with a smile and a bow-tie. 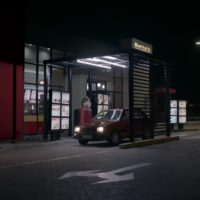 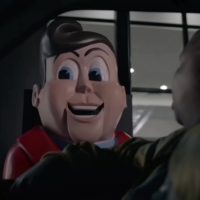 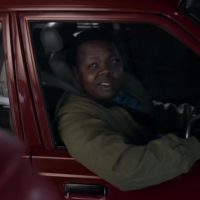 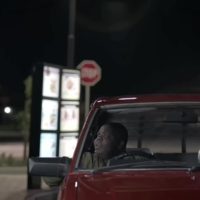 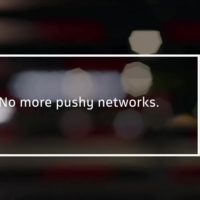 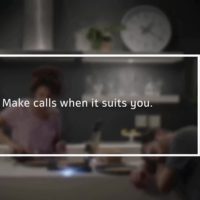 The customer drives up, ready to place an order. “Hi, I’d like to—” but he is interrupted by the robotic voice: “This call is being recorded. Can I take your order?”
Clearly bemused, the customer replies: “Could I just get the large cheesy chicken wings?”
“This order includes 200 fries. It’s how we’ve structured the meal,” the robot replies cheerfully.
“I don’t want fries, thanks.”
The customer is met with stony silence. There is an awkward pause as he waits to for some kind of acknowledgement.
“‘We now offer ketchup bundles at prices to suit you,” says happy robot-face.
“No, I don’t need ketchup,” says the drive-thru customer.
“Unfortunately the fries don’t work without the ketchup. Would you like a reference number…?”
But the customer has already started to drive off.

The voiceover puts it in context: “You wouldn’t accept this madness here. Why accept it from your network? No more pushy networks. New Telkom FreeMe. One plan, pick your data, set yourself free.”

The funky animation that fills the screen supports the quick sell at the end: “Free WhatsApp, texts and Wi-fi from just 99 bucks a month.”

Telkom has undergone two major changes in branding in the past three years, which indicates a certain amount of confusion at the telco’s marketing department. In July 2013, the sub-brand, 8ta, was rebranded as Telkom Mobile and then, in August 2014, Telkom decided to drop the sub-brand and revised its logo, unifying everything under the Telkom brand.

These changes happened under the auspices of CMO Enzo Scarcella, who had previously worked for Vodacom but recently announced he’s moving to MTN as COO. I think the new CMO would be well advised to continue with this strategy. Any more chopping and changing will have an increasingly negative effect in the minds of consumers. Furthermore, it becomes very costly to continually roll out new brands.

A decidedly better approach would be to invest in improving the product and service offering, which, it appears it is doing now.

Getting back to the campaign, the other two ads, “Hospital” and “Waffles”, tackle the issues of itemised billing and bundles that limit you to certain ‘off peak’ times of the day. As with the first ad, you immediately relate to the absurdity and rigidity of mobile network offerings.

It comes as no surprise that this ad series is directed by Terence Neale of Egg Films, who has directed a record number of ads for both Nando’s and Chicken Licken, not to mention high-profile music videos for artists such as Die Antwoord and Skrillex. The casting and comedic timing are spot on, the lighting and editing are superb and the overall result is a series of ads you can watch over and over again.

In the competitive world of cellphone services, Telkom is carving a clever marketing niche that puts it on the side of the consumer, and these ads reinforce that message with humour and impact. The result is a campaign that is based upon a lot more than just a promise — a campaign that is supported by a message that is smart, memorable and bound to be effective.