Ad of the Week: It’s a matter of size

by Oresti Patricios (@orestaki) King James II and director Chloe Coetsee of Darling get all steamy in an ad stuffed with great comedy and innuendo for Status’s new Big Ball roll-on.

Anyone who has frequented one of those shiny, glass-fronted temples dedicated to fitness, filled with shiny equipment and sweaty humans (otherwise known as gyms), probably knows the self-conscious experience of getting dressed in front of others. I don’t know what it’s like for women, but for men it’s often a case of trying to look nonchalant about being naked while towelling yourself dry and getting into your clothes as quickly as possible. It’s a goldmine for humour that capitalises male insecurities — more specifically one’s size ‘down there’. Just why size matters is a topic of debate that dates back to, well, probably our caveman ancestors.

King James II has tapped into this rich vein of both masculine insecurity and comedy for its latest TV commercial, which is for the male deodorant, Status, a brand that has been around since the early ’60s, and in 2011 was acquired from Unilever by Tiger Brands. The new campaign for Status is a wonderful about-turn, because it isn’t about women falling for some or other man because of his deodorant. The ad is called “Big Ball” — and yes, the innuendo is intentional.

The commercial begins with the hero of the piece, a tall, well-built man, who emerges from a steaming shower. The lower part of his body is obscured by someone in the foreground. An older, less well-built man looks at his nether regions, and seems impressed, while a younger guy takes one look and quickly covers himself with a towel.

The music is all cowboy-western, with a whistled theme and whip-crack sounds — it’s a suitably over-the-top theme to suit the tongue-in-cheek style of the ad.

As the hero walks through the gym, he gets similar reactions from all the men; they halt what they are doing: one is chatting with someone, and stops dead. Another guy is rubbing cream on his upper body (or are those his nipples?). They all pause and stare at the passing spectacle. One guy ducks out of his way, while another nods approvingly (as if to say, “I’m with you, pal”).

Our hero tries not to look phased but, as he arrives at his bench, he seems puzzled. Only then does the camera reveal his lower half, and we see that he is, in fact, covered by a towel — but in his hand is a roll-on deodorant. He looks at the deo, and realises why he has been getting all the stares. The narration explains: “New big ball from Status.” The pack shot shows the unusually-shaped roll-on, with its much larger-than-usual rollerball. 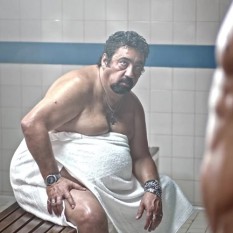 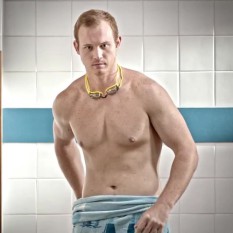 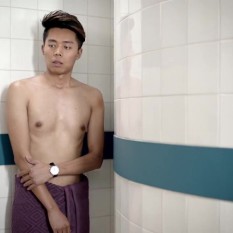 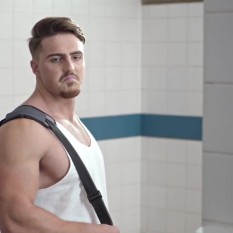 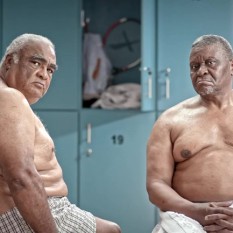 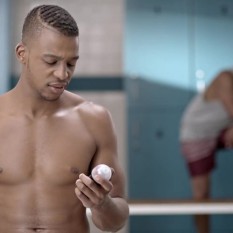 One of the best things about this ad is the casting: there are some rather overweight guys, a few typical gym-bunnies, a couple of bodybuilding types, and a lean triathlete type with his swimming goggles. They are all the kinds of people you’d expect to see in a gym, but everyone is selected with care: rather than stereotypes, each is a genuine character. Each one reacts differently to what our hero is carrying… with reactions ranging from awe to respect.

All in all, from the music, to the cinematography and to the performances, it’s a great piece of wry comedy that — even if you’ve seen it — will have you watching again for the punchline.

Hats off to King James II and production company Darling; it is so refreshing to see a deo ad that doesn’t have women swarming around a guy like bees to a honeypot, or something equally unrealistic or sexist.

No doubt the ‘talkability’ of this ad will give it legs. People are already cracking up about the television spot on Twitter: