by Mandy & Jon (@mandyldewaal) Having more sex is probably as good a reason as any for travelling abroad. Spies Travel made us chuckle last year with its funny/sexy “Do It For Denmark” ad; the second instalment in the campaign asks Danes to “Do It For Mom”.

Denmark apparently has a population problem — birth rates are going down, and the population is aging. That’s not a good scenario for the long term, as it puts a strain on the social welfare system. Last year, Spies Travel decided to do its patriotic duty and get Danish couples to procreate by persuading them to travel to more romantic destinations.

Do it for Denmark

The 2014 ad, called “Do It For Denmark”, offered a prize of three years’ worth of baby supplies to one family that could prove that they had fallen pregnant on a Spies holiday. This year, the message is similar but the target has changed: from couples to their moms.

The 2015 version takes a subtly different approach by enabling parents of childless couples to subsidise their children’s vacation. The ad also recommends warmer climes, as studies showed that people have more sex on a sunny vacation than other types of holiday, such as camping. And active vacations are also considered more, shall we say, fruitful, because exercise releases endorphins and our bodies display physical triggers such as sweat, elevated heartrates and breathlessness.

The 150-second spot has a visual story that runs parallel to the fact-driven commentary. “You can’t buy love,” the opening voice says over a closeup of the face of a woman who is looking sweaty and aroused. “Or can you?” the narrator asks.

The main character, a grey-haired lady, is seen sitting on a park bench. She is watching a woman of a similar age with her granddaughter, and she is clearly envious. “There are not enough babies being born, despite a little progress,” says the narrator, adding: “And this concerns us all. But those who suffer the most are perhaps the mothers who will never experience having a grandchild.” 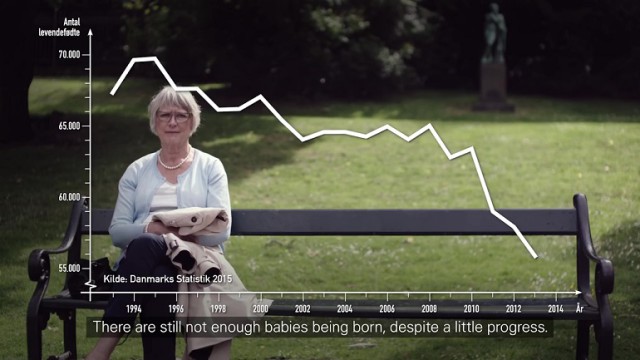 The grey-haired mother is leafing through a photo album, chronicling the growth of her son, and she lands on a blank page. She looks lonely and sad; this is where the story of her life ends. Now, some people might find this offensive: one commentator on YouTube has angrily defended her decision to remain childless, saying that her uterus is ‘not for hire’ to someone who wants a grandchild. We think it’s just an example of the dark and slightly weird sense of humour that these descendants of Vikings are known for.

The next scene puts this in context: with a soft-focus treatment, the story flashes back to the mother when she was younger, teaching her son to walk, to read, to ride a bike. “You were there when he learned to ride a bike…” the narrator says, “But when it comes to making grandchildren, it might be a bit awkward to help out.” The scene cuts to the son fumbling with his partner’s bra. Mom steps in and helps to unclip it. Son looks horrified.

“But don’t despair. We may have found the solution,” the narrator declares, and the scene cuts to the couple enjoying an active, sunny vacation. Several activities are shown, with some lovely sexual double-takes and phallic visual puns. It’s child-safe, but still very sexy.

The final ‘sell’ in the ad is the ‘Spies’ Parent PurchaseTM’ — a special website where broody wannabe grandparents can make a gift purchase towards their children’s vacations. In return, the romantic couple get an activity package and 1000 krone (about R2000) discount.

The last scenario portrays a mother whose single son “isn’t the biggest team player”. She, too, can take advantage of the offer, because “You never know what an active holiday might lead to”. This mother sends her stay-at-home geeky son on a sunny vacation, and he magically meets his soulmate on the volleyball court. (We know this because they both have caps with flying saucer graphics and the slogan “I Believe”).

The end scene is of a crowd of grey-haired ladies waving goodbye to a Spies-branded aeroplane taking off. “So let’s join forces and give the world more grandchildren,” says the narrator, adding: “If they won’t do it for their country, surely they will do it for their mother.”

After a “Do it for Mom” end-graphic, showing our main character holding a baby, there is a standard disclaimer: “Delivery within nine months not guaranteed.” Classic!

What makes this ad great is that it has just the right balance of funny, sexy, sentimental and smart — tongue-in-cheek humour and effective advertising at its best.