James Hamlyn of Cape Town-based creative agency, Utopia*, talks to Shelf Life about the concept behind a range of idiom-inspired glass water bottles soon to be launched in South Africa. Utopia, which was established in 2011 by Graham Warsop, adopts a ‘screw-the-line’ approach to all projects, whereby idea is always king and translates that into whatever works for the brand, thus creating its very own utopia. 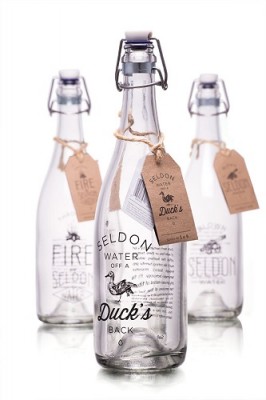 Seldon Water is a pioneering water-filtration company with a vision to clean Africa’s drinking water with its novel Nanomesh technology. Utopia was briefed to conceptualise the packaging for Seldon’s home-water filtration solution, WaterTap, in conjunction with the brand’s recent Zimbabwe launch.

Explains Hamlyn, “With a technology-focused USA parent brand — Seldon Tech — we were required to steer clear of the existing high-tech branding and adopt a more premium, consumer-based look and feel.

The idea was to use well-known idioms pertaining to water to create a series of six collectable glass bottles: “We researched into the meaning and origins behind several water-based idioms, choosing six to feature on the bottles,” he says. “Each bottle within the series showcases a different idiom, with its respective meaning used as an analogy to tell part of the Seldon story. Once we had cracked the concept, we rolled out the idiom branding across all the remaining elements in the brief.” 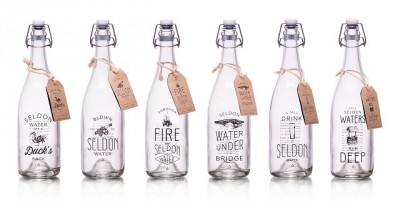 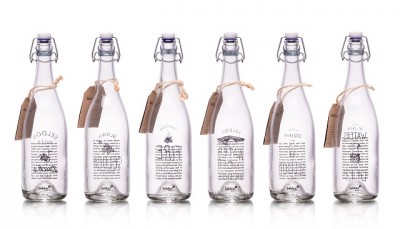 One of the idioms, “Water off a duck’s back” is portrayed on the bottle as: “Ducks aren’t perturbed by a bit of water here or there. Nothing ruffles their feathery defence, much like nothing harmful gets through Seldon’s innovative Nanomesh technology. It’s the only proven method of filtration that removes all the bad stuff, while retaining all the good stuff. It’s our Nanomesh technology that allows us to bring you the purest filtered water money can buy. Just like a duck’s back, Seldon water is intelligent design.”

The bottles are meant to be an engaging representation of the brand to accompany its more utilitarian products and, by creating a series, Utopia gives consumers a reason to buy more than one.

The clean, elegant design speaks to the sophistication of Seldon’s Nanomesh technology, but it’s the copywriting that really captures the imagination.

*Keep an eye out for a forthcoming story on Utopia on MarkLives within the next couple of weeks!

Contributions are in the candy box

There’s a fun new virtual way of giving and receiving gifts that finally eliminates that tatty envelope being passed around at the office — with the resultant uninspired birthday voucher.

Candystick is a secure site that makes collecting money for gifts easy and appealing. For any celebration — from birthdays, weddings and office farewells, to anniversaries, stag nights and bar mitzvahs — Candystick takes over and manages the process for you.

No more chasing the gift money, collecting signatures on the card or rushing to buy something you’re not even sure they want; instead, now you may take four simple steps online and it’s all done for you. Your colleagues will like it, too, because they get a chance to purchase what they actually want.

Candystick does not charge for creating a Candybox but does have a R5 transaction fee per contribution. Following collection from identified contributors, you may either give the full amount of cash collected to the recipient; buy a gift at one of the online partner stores; or, for a 5.5% transaction fee, ask for a bank transfer (see FAQ). 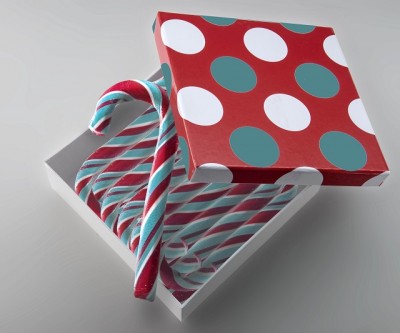 The Candystick website is intended to flexible and very easy to use, with useful features such as automatic reminders being sent to contributors, as well as ‘thank you’ notes from the Candybox recipient once the gift maturity date has been reached. There is also an ‘opt out’ option for anyone not wishing to join the group. The Candybox collection may be linked to Facebook, and new friends or contributors may be invited in at any time during the collection.

During the collection process, the Candybox is private and is protected in a bank’s safe deposit account until its maturity date. There is a ceiling of R10 000 and a minimum of R50 that may be paid by a single ‘contributor’ and the amount that people give is confidential and not visible to the rest of the group.

As the next step in its strategy to produce marketing and advertising talent for Africa by training 100 000 students by 2020, Red & Yellow has established a new school in Johannesburg.

Launched last week, the facility will play a central role in Red & Yellow’s plan to train students from across Africa. It is located at National Bank House at 84 Albertina Sisulu Street, right in the heart of the CBD, and the campus will be headed by ‎Lyndi Lawson-Smith, formerly a co-founder of Quirk Education.

Comments Lawson-Smith, “Our second campus is closer to the headquarters of our corporate clients, as well as many of the country’s largest brands and agencies — and they’ll all be important partners in the next chapter of our story.” 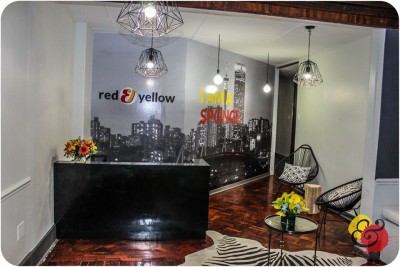 The school hopes to help attract the creative industry back to Joburg central and is making a bold statement about its position as a truly world-class, Africa-focused school in a cosmopolitan city. Situated on a major transport route, the campus immerses students in a vibrant and fast-paced urban environment, where they will be equipped to work in today’s creative economy.

“For 20 years, Red & Yellow has produced graduates who are game-changers in their disciplines and industries,” says Lawson-Smith. “Our goal is to produce even more such exceptional talent, without losing the qualities that make the school special. As always, we’ll be a school of logic and magic — a place where business acumen and creativity are harnessed to deliver great outcomes for students and their employers.”

Red & Yellow’s focus will be on providing strong, industry-relevant practical training with a sound academic underpinning. Courses will all be designed to be relevant to today’s business professionals.

Initially, the school will offer a set of part-time courses — short- and longer-term, online- and classroom-based — to Jozi students. The offering will expand to encompass full-time courses in 2016, with Red & Yellow committing to continually extending its portfolio.