Ad of the Week: The Land Rover legacy #CelebrateDefender

by Oresti Patricios (@orestaki) Land Rover is not a brand that I have an instant connection with. Even though I love the great outdoors, I’m not one to go off-road and sleep in a tent — I enjoy my creature comforts.

But #CelebrateDefender, the farewell campaign for the Land Rover Defender, from Y&R Johannesburg, certainly cuts through the clutter, and I believe it speaks to people from all walks of life, because of one discerning feature: storytelling. 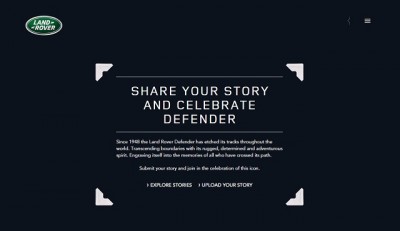 The print, online and outdoor campaign is based around a microsite, celebratedefender.com, that invites Land Rover Defender owners to share their stories about their experiences in the places that their Land Rover took them, or just about the car itself. The front page offers two options, either “Explore Stories” or “Upload your story.” Clicking on “Explore Stories” brings up a page with one of the stories, consisting of a picture and text, brought to the foreground. Closing this window reveals a collage of pictures, each of which may be clicked on to reveal another story.

Thus far, Land Rover didn’t have much of a story for me — it was a boxy, often-dirty vehicle that one saw from a distance without necessarily being able to place it. Admittedly, I’m not the target market, but I’m part of the talking and storytelling audience, so this draws me in and allows me to tell an interesting story about the vehicle as more than a car.

Land Rover has been associated with Kingsley Holgate, who does amazing cross-country journeys in Africa, since roughly 1998, when he became an official ambassador. Land Rover continues to support the Holgate’s humanitarian work in Africa via his Kingsley Holgate Foundation through vehicles and financial support for humanitarian aid, together with other organisations such as Born Free, Red Cross, and the Endangered Wildlife Trust and the work they do to protect the wild dogs in South Africa. 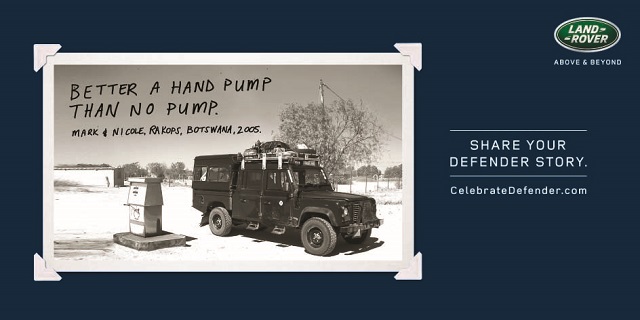 his microsite allows ordinary people (well, as ordinary as people who like to sleep outside in tents can be) to become brand ambassadors for the Defender. And the stories are the stuff of personal legend. One story tells of getting stuck in the mud not once, but four times, and each time more thoroughly, while trekking through the Central Kalahari. Another celebrates the “9 Lives” of a Series 3 that had been through World War II, had been submerged in the Rhine River for a week, and was finally bought on eBay for 200 Euros by a South African who rebuilt it using spare parts from another, newer, Defender. 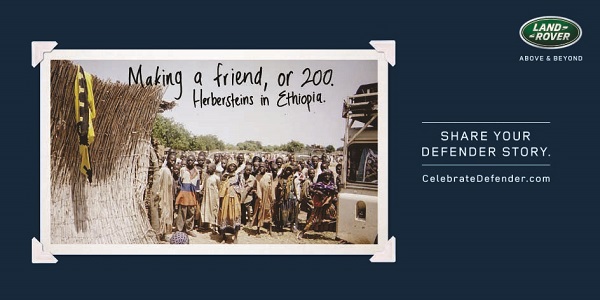 The site design is clean and visual. Each story is as compelling as the next, so the temptation is to just keep on clicking to the next, and the next. One can filter according to terms, such as “Sand”, “Bush”, “Ice” and “Urban”, and there is also a link to an interactive Google Map, with tags for the locations of the stories or the storytellers. If you drag the page to the left, more pictures drop into place to continue the collage.

The microsite was built by Base Two Digital, which also ran the social media campaign. 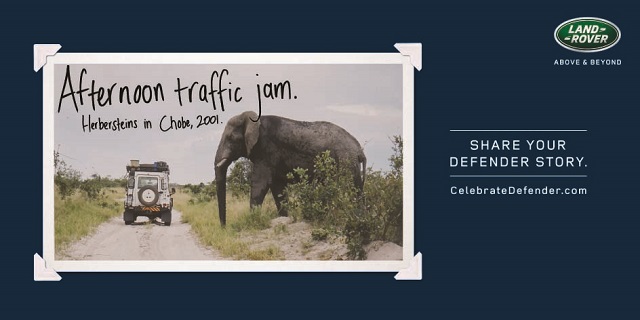 The print campaign for the call for entries was clear and simple. Using the motif of a photo in an album, each ad featured a Defender in different locations — for instance, with an elephant at the side of the road, and the caption “Afternoon traffic jam — Herbersteins in Chobe, 2001.” Beside this was the text, “Share your Defender story. CelebrateDefender.com”. Plain, simple and effective. 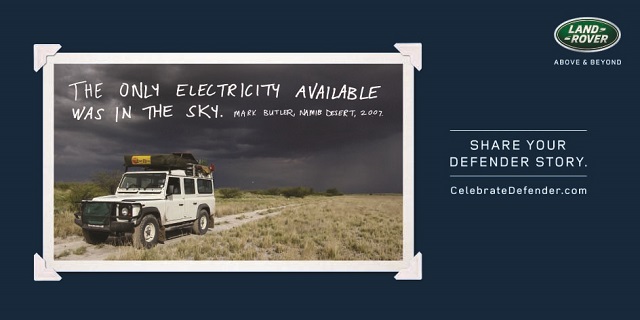 The TV ad calling for entries was also clever and eye-catching. Made up of still images, with the Defender always in the centre of frame, and minimal text, the ad tells the tale of “A boy, a girl, and a Landy named Andy”. In 30 seconds, the ad flashes through this couple’s journey, that went through seven countries and covered 22.500km, and ends with a call to action: “Share your Defender story with us, so we can share it here.”

The final phase of the campaign, according to information received by MarkLives from the agency’s PR, will be to “immortalise these stories by collating them into a coffee table book, amongst other executions.” 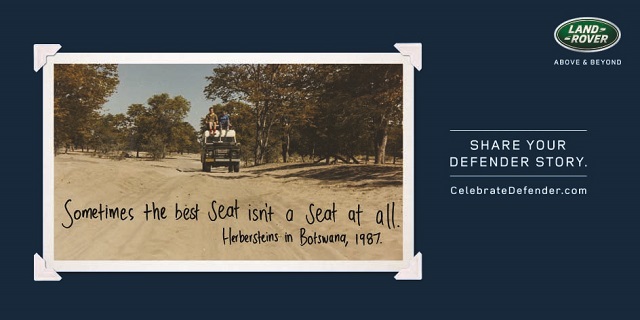 The #CelebrateDefender will also be the last campaign for Land Rover by agency Y&R South Africa, due to a global decision earlier this year to consolidate its creative and digital advertising services. The account will move in-house to Spark44 by the end of the month.

The campaign leaves a lasting impression, and integrates online and offline beautifully without overly emphasising the brand — the stories are about people, and their adventures. It speaks to the spirit of adventure, the lifestyle of explorers and dreamers, and those who dare to step outside their comfort zones (and sleep in tents).

A previous version of this column stated that there doesn’t seem to be much Land Rover ambassadorship anymore. This has now been corrected. We regret the error.