by Mandy de Waal (@mandyldewaal) “I want to become one day the new Steve Jobs and create a new kind of Silicon Valley in Africa.” That’s Sam Kodo speaking. He hails from Togo, which is wedged between Ghana and Benin on the west coast of Africa.

Kodo dreams big but what sets him apart is his curiosity and his can-do attitude. He’s the man with a plan — the kind of person who finds solutions where others see only problems. 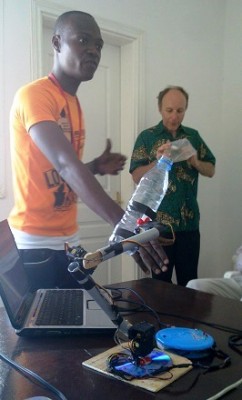 Sam Kodo (left) with one of his robots.

Kodo’s been experimenting with robots since he was a kid, and has achieved more than most people twice his age (he’s currently in his early 20s).

In 2000, when Kodo was just seven, he started experimenting with building a robot. His mother had long given up complaining about Kodo, who had been taking his toys apart to see how they worked. His father had gotten used to helping his son search for components from broken appliances to reuse in experiments.

“I was fascinated with sci-fi movies and books,” Kodo says of his childhood, in emails written to MarkLives.com from Togo. Kodo speaks French, so for this interview there’s a bit of toing and froing to ensure good communication.

In an email from Lomé, Togo’s capital, Kodo explains that he spent most of his youth talking about electronics and technology.

Kodo immersed himself in various aspects of robotics, visiting the library frequently and building various prototypes. By the age of 15, Kodo’s robots could recognise faces and objects, speak, execute orders and even play football. One of his most recent creations can feed animals and respond to commands given via cellphone connection. 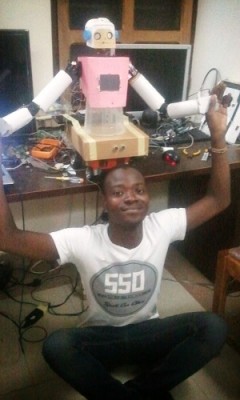 Today, the 23-year old sociology student dreams of getting tenure at the Massachusetts Institute of Technology (MIT) and using robots to reinvent Africa. “Robots are great solutions for the mechanisation of industrial sectors in Africa where we still use human for strength,” he writes, adding that robots could work as farmers in agriculture to increase the rate of production and the turnover.

But building robots hasn’t always been easy going for Kodo. “At the beginning it was difficult to create my first robots because of lack of computers to program them, internet for research, electricity and robotic materials in Africa,” he writes.

Kodo found it difficult to find processors, motors and electronics parts; so the components he used were all from radios. “My robots weren’t intelligent enough. But today things are different. I import processors and others components from America so nowadays my robots are intelligent. They can easily recognise faces and speech; they walk and interact with humans.”

Building robots is what Kodo does during his downtime; it is not the way he makes a living. “Actually, my robots are not for a commercial venture but for research and for my hobby,” he says. “In the future, I plan to create robots who will have same intelligence as real humans,” he writes, adding that his goal is to integrate these robots into society and make them more useful.

In 2013, Kodo won a cash prize in a national competition for young entrepreneurs, which he used to set up a small company, employing six people and renting a work space. The company, called Infinite Loop, builds low-cost computers. These are simple PCs that can use any TV or screen to run the basic applications that a student might need to browse the internet and write up assignments. The basic unit retails for US$90 and at the moment the company cannot keep up with the demand. 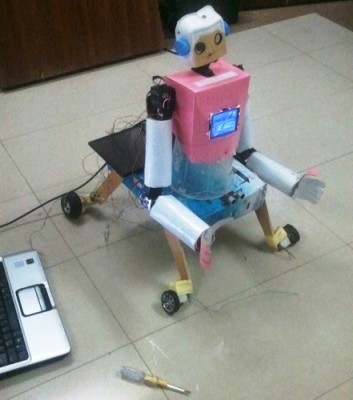 Teamed up with a friend

To start his business, Kodo teamed up with one of his childhood friends, who studied commerce at university and brings the financial ‘brains’ to the table. Kodo says, “When you choose a business partner, choose someone who complements you — not someone with the same skills — but someone who can add value to the business.”

Last year, Kodo was selected as one of the 12 finalists in the Anzisha Prize, which recognises and celebrates African entrepreneurs between the ages of 15 and 22 who are using business to solve problems in their communities. The Anzisha Prize is an initiative of the African Leadership Academy, an organisation that provides mentoring and training for promising young entrepreneurs throughout Africa. 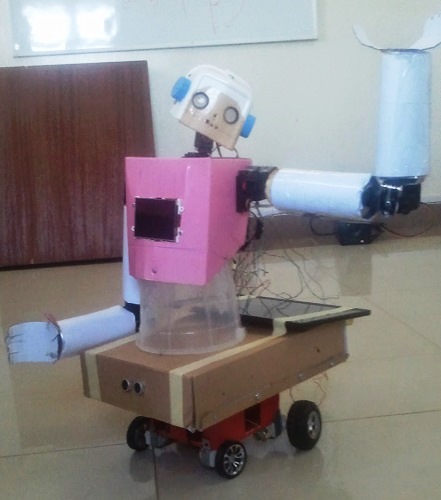 Robo pretty much everything

Bloomberg reports that Clearpath Robotics — a Canadian startup which makes rugged, all-terrain robots — has just raised C$14 million. With these funds, it says it wants to robo pretty much everything. “If it’s got four wheels we want to automate it,” Matt Rendall, the robotics company’s CEO told the financial news brand. “It can be something as small as a vacuum cleaner or something as large as the biggest mining equipment,” he added.

Remember when Koos Bekker said that Naspers would rival Google in emerging markets, and everyone quietly chuckled? They’re not laughing any more now, are they?

Mandy de Waal is a writer based in Cape Town, South Africa. Follow her on Twitter at @mandyldewaal or on Google+.