by Gill Moodie (@GrubstreetSA)  BDFM’s Financial Mail is getting a brand new look this week and Grubstreet had a sneak peek at the long overdue revamp.

Get a load of this dummy front page and compare it with an edition from August this year (below right with Zwelinzima Vavi dominating the cover) to see how different the mag looks.  The main changes include:

In a chat with Cohen and  BDFM’s chief sales officer, Eben Gewers, last week as the two were on a road show taking the new design to advertisers, Gewers said the response from advertisers was positive.

Cohen, who took over the FM editorship this year, said the redesign was not about a new editor wanting a new look but was chiefly about saving money.

Previously, the magazine was printed at two different presses – at Ince for the cover and Caxton for the rest of the mag – but now all of  FM will be printed in one place: at Paarl Print.

Speaking about the new look for the cover, Cohen told Grubstreet: “In 2006, the FM was last redesigned and there was a style and ethos of magazine covers at that point, which was simplified: have one big, strong image and very graphic heavy because new graphics were coming on to the table at that point. 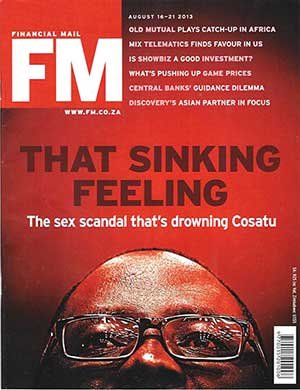 whole bunch of news magazine, principally The Economist.  A lot of magazines still hold those values sacred so what we are doing here is totally different.

“The reason why we’ve chosen this sort of look is that we want to stand out from all the monthly magazines. We don’t want to look like a newspaper. We still want to look like a magazine but we want to edge slightly newsier and for people to be conscious of the fact that this is not entirely a lean-back-and-put-your-feet-up-on-the-table kind of read once a month. There’s a news dynamic here.”

Grubstreet has paged through the dummy copy in the past week and we can say we approve.

The FM was desperately in need a fresher look as it was feeling tired and dated. The philosophy behind the design change is thoughtful and sound.

And the new-look mag is easier on the eye – better suited to a busy lifestyle as it doesn’t feel so visually dense. With the old FM, I often felt: “One day I’m going to need glasses to read this font size. ”

On the whole, the new-look mag looks sassier but it’s still smart and although I did wonder about the lower-grammage in the beginning as it feels less substantial, we must remember that it only has to live for a week – not a month.

I particularly really like the new cover – with its many different entry points and its edgier online feel.