Newsjacking: a fad or the future for marketing?

by Richard Gruner, University of Melbourne A newsworthy event is happening right now. And another, and another — it never ends.

This is vital not just for feeding our 24-hour news cycle and hungry media corporations, but increasingly also for marketers working for all sorts of brands. That’s because every news story has the potential to attract the same people firms wish to reach and talk to, and is therefore an opportunity to be “newsjacked”.

[pullquote]Yes, brands can be relevant, thrill, amuse, surprise and excite their stakeholders. This is part of a widely discussed shift toward a new logic of marketing, based on intangible resources (instead of a mere exchange of money for goods), relationships, and the co-creation of value. But is there enough “real” co-creation of value happening?[/pullquote]

Newsjacking. It means injecting a firm’s ideas or angles into breaking news to generate media coverage for your brand. A prominent example of this is when officials at the London Olympics mixed up the Korean flags, and optometrist Specsavers moved in with their slogan: “Should have gone with Specsavers”.

Bestselling marketing author David Scott explains that these stories do not even have to directly relate to your business. When Kate Winslet was  staying with Sir Richard Branson at a private retreat, lightning set their home on fire, and Kate rescued Branson’s elderly mother from the blaze. That’s not only a story that will attract attention and interest, but the London Fire Brigade saw an opportunity here to run a story on their website, offering the actress a chance to train with their firefighters. I don’t think she ever took them up on the offer, but with little or no investment, the fire brigade had unprecedented media exposure and interest in their work. Newsjacking on fire.

Newsjacking should happen in near real-time to be executed well. It demands a fluid, creative team that can go from idea, to concept, to market in less than 48 hours. Of course, social media can accelerate this process. It can take weeks or even months for a print ad to get published, but to inject content on your Facebook fan page only takes a few minutes. And yes, as Simms says, if you do it right it’s an easy way to build consumer affinity, affection and saliency for your brand.

Energy drink brand Red Bull was a step ahead last year when they decided to be the news instead of merely “jacking” it. Red Bull’s space diving 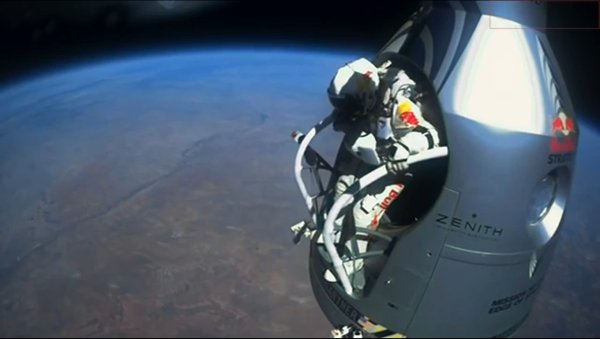 project saw skydiver Felix Baumgartner fly about 39 kilometres into the stratosphere over New Mexico and then parachute to Earth, breaking the sound barrier and several other world records.

A lot more is happening, though. Just like news stories break every minute of every day, marketers innovate relentlessly. Researchers at Lancaster University have recently invented software that locates shoppers’ faces and tracks eye movements captured on camera. This technology allows for video screens to change their content depending on what shoppers are looking at in a store or on a screen.

But instead of exploring further where marketing is headed and how innovative emerging marketing techniques work (and how they can easily backfire or, even more likely, have little or no effect at all), let us look at where marketing should be headed.

Yes, brands can be relevant, thrill, amuse, surprise and excite their stakeholders. This is part of a widely discussed shift toward a new logic of marketing, based on intangible resources (instead of a mere exchange of money for goods), relationships, and the co-creation of value. But is there enough “real” co-creation of value happening?

Probably not. Most firms still seem to think that their sole purpose is to make money — the more the better. This narrow view shaped the actions of most firms that focus on their balance sheets and maximising shareholder value. While this view can lead to innovative communication campaigns in an attempt to stand out of the crowd, it leaves little space “for companies to face the fact that they command enormous resources that influence the world for better or worse and that their strategies shape the lives of the employees and consumers on whom they depend”, says Rosabeth Kanter.

Perhaps managers should be more concerned about balancing public interest with financial returns, and a little less about whether or not their strategies capture consumers’ attention and whet their appetite for new products.

I am talking about firms getting out there and making the news, like Red Bull, only in a more meaningful way. Coffee importer Sustainable Harvest, for instance, emphasises transparency and allows consumers to trace their product across the entire supply chain. They are also handing out iPads to their coffee farmers to further improve the traceability and sustainability of their products. This is perhaps not as “sexy” a news story as Red Bull’s excursion into space, but more replicable, meaningful and, incidentally also profitable. (Sustainable Harvest grew more than five-fold over the last years.)

Companies will always have an agenda, but it should go beyond financial concerns. Purely financial concerns can drive firms such as Nestlé to advocate even the privatisation of water. Have a look at this interview if you struggle to believe it. Corporations that make a turnover of US$65 billion dollars and, at the same time, reckon that people have no right to water unless they pay up, is not what consumers are looking for [Peter Brabeck-Letmathe offers a rebuttal here].

Consumers crave firms that act in the public interest. Whether managers support these actions with the latest marketing fad or more traditional means may, at least in the long-term, not matter all that much. And newsjacking — though potentially somersaulting a brand into the collective conscious — is but one of the latest fads in marketing; a fad that likely fails to engender true consumer loyalty.

Richard Gruner does not work for, consult to, own shares in or receive funding from any company or organisation that would benefit from this article, and has no relevant affiliations.