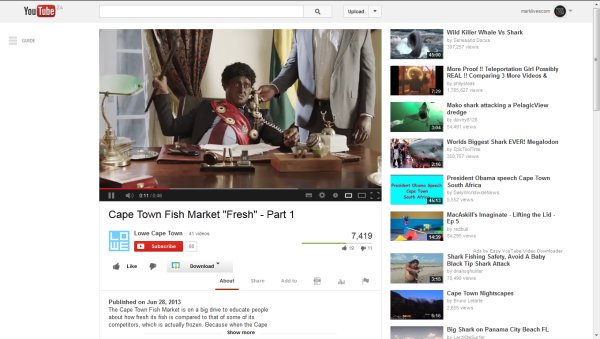 by Herman Manson (@marklives) Cape Town agency Lowe + Partners and client Cape Town Fish Market has been strongly criticised for using ‘blackface’ in their latest TV commercial. The ad has even been featured on Al-Jazeera who reported that the it had sparked ‘outrage among South Africans.’

In American history especially, ‘blackface’ was used to create stereotyped caricatures of black people. Today it is still sometimes used as social commentary or satire but it is generally considered politically incorrect.

Mvelase Peppetta blogged that he found the ad seriously offensive and suggested lack of transformation in the ad industry might have played a role in the ad getting flighted in the first place. “People far smarter and more experienced in SA’s marketing industry than me have time and again explained how the lack of diversity in our ad industry leads to these kind of horribly offensive and stereotypical ads,”  wrote Peppetta.

On US based site Africa is a Country T.O. Molefe wrote that “The ad uses blackface to play on the tired trope of a corrupt dictator from a nebulous, nondescript African state. It’s a double blacking up of stereotypes, because corruption and dictatorial tendencies are not uniquely African. That the two have such a strong association when corrupt, authoritarian politicians have been a global phenomenon throughout history has a lot to do with the enduring appeal of the idea that Africa was better off under its white colonial masters.”

Aiden Connolly, MD of Lowe Cape Town, says the agency never intended offence with the ad and admitted it had been taken by surprise by the negative reaction. He confirmed the agency would meet with its client and offer recommendations on how to deal with the current backlash. The campaign has significant media spend around it and versions of the ad is scheduled to run over the next two years – so this wasn’t an ad generated to create controversy and be quickly pulled, says Connolly.

Connolly says that the agency has been contacting people directly who has raised concerns over the ad and that it has supplied them with information on the creative rationale as well as an apology for any offence caused. He admitted that when a communication message (in this case around perceptions of fresh fish) gets lost  an ad is in trouble.

While those familiar with African-American history would certainly have steered clear of using blackface the South African cultural context is of course quite different from the American one. The annual Cape Carnival (Kaapse Klopse) is a boisterous affair featuring minstrel groups (some of them make use of blackface) that celebrates the abolition of slavery in the old Cape colony. The Klopse were banned from following its historical route through Cape Town during Apartheid to ensure participants don’t march through ‘white’ areas as designated Group Areas Act  – a key Apartheid policy. Tweede nuwe jaar (January 2), when the Klopse happens, is considered a celebration of freedom and emancipation.

This should not serve as an apology for Cape Town Fish Market or its agency. In the age of YouTube, advertisers need to be taking a broader and informed view on what could create controversy around their communication, and of course, the ad has faced significant criticism in South Africa itself, though maybe not quite on the scale the Al-Jazeera would suggest (it’s only made just over 10 000 views on YouTube as of 2013/07/16).

The ad should be pulled and the offending scene should be replaced. At the same time South Africans need to interrogate to what extent they want their (many varied) culture(s) viewed through a lens informed mainly by America’s cultural and historical context.

Hermaneutics is a column by MarkLives.com editor Herman Manson. It indicates as much opinion as reporting.