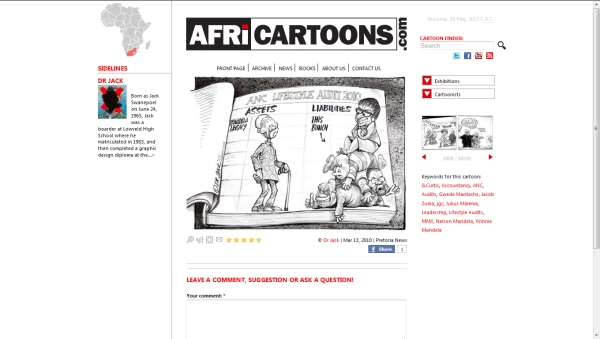 by Herman Manson (@marklives)  Editorial cartoons remain a staple in our newspapers. Which should be worrying to cartoonists as said media continues its circulation slide and publishers keep cutting back on content. A small pool of cartoonists work for an even smaller pool of newspaper owners. You can see the possible disadvantages in such a set-up – especially for cartoonists (few places of employment in a declining environment). Editorial cartooning seems like a risky career proposition, overall, unless you are Zapiro. 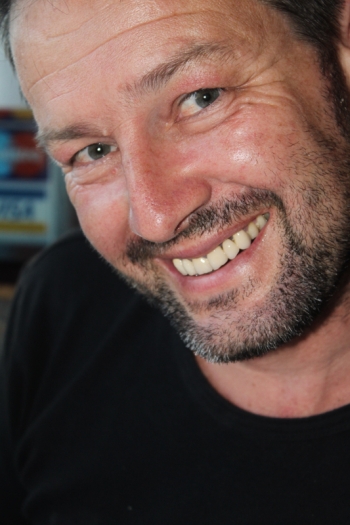 One day one cartoonist, John Curtis, decided to bring together a collection of cartoons celebrating Nelson Mandela, and publish it online for his 90th birthday. Africartoons was born, and helped establish an informal network between the professional editorial cartoonists in the country, which Curtis says numbers around 30.

Today the website holds a substantial trove of South African cartoons numbering anywhere between 10 – 12 000, with between 200 and 350 cartoons added every month. That is out of a total of approximately 430 strips and cartoons published in SA newspapers each month. Apart from maintaining an important editorial archive, the site has helped open up the digital market to local cartoonists, gives them access to an audience beyond often regional newspapers, and allows for greater networking and collaboration between cartoonists.

It’s improved the business environment for cartoonists, who have become more aware of who holds the rights to their work (them, preferably), and offers an informal platform for support (like when  paper The New Age, owned by the controversial Gupta family, dropped cartoonist Jerm, allegedly because his cartoons were not “aligned with the paper’s vision and mission.”)

The site has to date been funded by Curtis, who, alongside fellow cartoonist Dr Jack, was recently signed by City Press to produce editorial cartoons as DR JACK & CURTIS for the paper. Curtis had originally used the design studio founded by him and his wife Michelle, digitalJUNGLE, to build and maintain the site, but the agency had scaled back after Michelle’s second pregnancy, so for the moment Curtis is managing most aspects of the site.

At the moment Zapiro’s cartoons are amongst the most popular on the site, but he is closely followed by Yalo (Sifiso Yalo from the Sowetan) and several other Zulu cartoonists. It shows, says Curtis, the appreciation a broad range of South Africans feel towards editorial cartooning.

“In fairness to Zapiro, his own website scoops a lot of Google searches as well as ours,” says Curtis. “Interestingly, Qap’s Mngadi is one of our most searched for cartoonists by name, in spite of the fact that we don’t regularly post the cartoons he draws for the Zulu newspaper Isolezwe. This is because we don’t have the facility to translate them, but our planned new website will offer a language filter so that we can accommodate cartoons in languages other than English without necessarily translating them.”

Mngadi is one of the few South African cartoonists to draw in an African language, notes Curtis. Another is Wilson Mgobhozi (MGOBHOZI, who also draws Zulu cartoons). “There’s a host of very good Afrikaans cartoonists (Media24’s FRED MOUTON, F(rans) ESTERHUYSE, NIËL van VUUREN and also Alastair FINDLAY to mention a few) but there’s a dire need to encourage cartoonists to work in the other languages,” says Curtis. “A prohibiting factor is a lack of publications (printed and digital) to support such work.”

[pullquote]That would enable us to open Africartoons up to the rest of the continent, while allowing readers to decide which cartoons they’d prefer to see.”[/pullquote]

Curtis hopes to pull in many editorial cartoonists from the rest of Africa later this year and is looking to revamp the site to make it easier to browse through regions and languages. Over the past few months Curtis has also focussed on building the Africartoons Facebook fan base and it currently stands at around 14 500 ‘Likes.’ South Africans still dominate as a proportion of its Facebook fans but there is also a strong contingent of people following the site from Mauritius, Mozambique, Malawi, Botswana and Kenya.

Close to 70% of the site audience is male, which Curtis finds quite interesting, especially coupled with the fact that there are so few female editorial cartoonists currently working in the country.

“There’s also a shortage of women cartoonists.” says Curtis. This is a global phenomenon, borne out by the fact that only one third of our Facebook readers are women. In South Africa, only Noseweek’s Stacey Stent (STENT) and DENI BROWN (writer for the MAMA TAXI strip) are the only two women amongst some 30 professionals in our field. Africartoons has initiated a campaign with these two cartoonists which hopes to discover and encourage new female talent.”

Curtis says there is plenty of aggression in editorial cartooning – he tells how one fellow cartoonist once came back from a sabbatical saying how wonderful he felt not ‘having to stab somebody in the back every morning.’

Jerm (cartoonist Jeremy Nell) is singled out by Curtis for his drive in opening new markets for editorial cartooning in South Africa. Not only is he a fully digital cartoonist (software replaces paper and ink) but he is also focussed on producing work for digital platforms. Primedia owned Eye Witness News (EWN) has signed him on to produce cartoons for its website – which is then discussed on Primedia’s talk radio stations. He is also producing work for technology news site TechCentral.

Curtis hopes that monetising the site will ensure its long term sustainability, but finding sponsors for sites considered ‘political’ have proven problematic in South Africa in the past (tenders beat free speech nearly every time – Ed). He’s looking for sponsorship by foundations supportive of free speech as well as commercial relationships. The discourse created by editorial cartoonists is an important one – losing it translation as news and opinion shifts online is unthinkable.