by Arthur Goldstuck (@art2gee)  More was spent on the planning of the Free State government web site than most South African corporates have ever spent on the full development and implementation of their web sites. 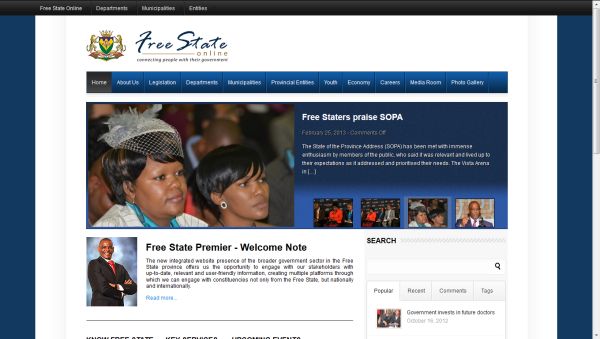 website” to the “Cherry Ikamva-Jugganaut Joint Venture”. It includes four phases prior to implementation, followed by implementation, maintenance and “content generation and management”.

The tender award document, supplied yesterday to Radio 702 by the Office of the Director General of the Free State Provincial Government, makes for startling reading.

The Free State Provincial Government comprises 11 departments, including the Office of the Premier. Along with the Metro, the first line item therefore comprises 12 sites, for a total cost of R4 200 000.

The Free State province comprises 19 local municipalities, of which 6 could be described as “larger” (those that include the larger Free State towns, namely Kroonstad, Welkom Sasolburg, Parys, Harrismith and Bethlehem). The second line item, based on this outline, comes to R1 800 000.

The province includes four “District Municipalities”, which are in effect umbrella bodies for the 19 local municipalities. The Entities refer to statutory bodies, of which there are four: Free State Tourism Authority, Free State Gambling and Liquor Board, Free State Development Corporation and Centlec, the local electricity authority in Bloemfontein. Based on these municipalities and entities, the third line item amounts to R1 600 000.

The total cost, then, of planning the Free State government website was R9 550 000.

Phase Two, for “Design”, also allocated to the 2011/12 financial year, included the same line items, with the same costing. In other words, the Design of the site/s cost exactly as much as the planning: a total of R9 550 000.

Phase Four, for “Testing”, was open-ended, specifying “R900 per hour x 10 persons”. Assuming, very conservatively, that three 8-hour days were allocated for testing, this would have amounted to a relatively humble R216 000. No ceiling was placed on this amount, however, and it could be ten times as high.

Phase Five, for “Implementation”, which appeared to be something other than design, development, creation and testing, was given a budget of R413 600.

Phase Six A, for Maintenance, and Six B, for “Content Generation and Management”, is a fascinating mix of hidden and unstated cost. Maintenance is costed at “R900 per hour x 2 persons”. It can safely be assumed that maintenance was allocated to budget as an ongoing function, i.e. 40-hours per week x 2 persons, amounting to R72 000 per week. Assuming the financial year ended in June, as it usually does for provinces, and a modest 12 weeks of maintenance was provided, the total would be R864 000.

Assuming the project started in time for three months of content generation and management to be provided in the 2011/12 financial year, the total paid out in the four months after the tender was awarded would have been R30 468 600.

“Phase: Maintenance, including review and update of design: R900 per hours;
“Phase: Content Services, Generation and Management: R68 253 per month per site.”

This, in turn, gives the Free State Government website (http://www.freestateonline.fs.gov.za) the distinction of being the most expensive website ever built (or not built) in South Africa. The previous website to hold that dubious honour, a South African Airways site aimed at foreign visitors, cost R90-million in a venture that was eventually aborted in 2001.

By way of comparison, the website of the South African Presidency (http://www.thepresidency.gov.za/), which is somewhat more complex than that of the Free State provincial Government, was built and maintained by Absol Internet Business Solutions (which hosts the Gadget website and content management system) at a total cost of about R250 000 over the past four years.