The Gate Keeper Chapter 27 (In which ends are reached)

The trap is sprung, the consultant reacts accordingly and deals are made in the Mangaung corporate tent...

In which ends are reached

Mangaung was fizzing like, like, well… actually Vati couldn’t even put a word to it. Mangaung was fizzing, full stop. The hum of power, influence and deals was thick in the air, mixing easily with the fumes coughed up by of a thousand BMWs, Mercedes and a multitude more black four wheel drives. The blue lights flickered and the sirens burped in short, sharp, instructive bursts.

Tim Broadbent, for his part, was equally struck by the thing. He had never, as rich and influential as he was, encountered such a raw wave of it. And really, it was the sheer force of numbers that did it. Around the black grills and blue lights swarmed, like an invasive, alien species, the biggest horde of service providers ever to assemble in Southern Africa. The packs of communication consultants, security guards, journalists, freelance media whores, runners, fixers, chauffeurs, and advisors ran thicker on the ground than Wildebeest in annual transit.

Tim Broadbent felt overwhelmed, and sudden flickers of doubt about exactly what it was he was doing began coursing through his gut. He marched confidently through the hotel lobby, however. He was too experienced a player to let inner turmoil get to the surface. En route, he dialled through to his contact at the SABC, who he knew to also be skirting the outer edges of the city. “Cindy, listen,” he blustered. “In two days. Saturday morning in fact. 10:00am. I’ll be holding a press conference. Not a small conference. A big one. Tell your friends. Bring guests. It will be worth it,  I swear.”

Arthur Harris veered suddenly off course. In fact, if he was honest, he would admit that he actually stumbled. He had been trotting around with Tim Broadbent for weeks now, making sure that signs of incipient insanity remained just that. He had run the old buzzard through more interviews and retrospectives and highlights and case study sessions with simpering little journos than most could cope with, and while the geezer wasn’t exactly a thrill a minute, he had gave no obvious signs of sinister or lunatic intentions.

That call was, quite obviously, not only meant for the journalist’s attention. He was meant to hear it too. Arthur Harris stopped to tie his shoelace on the plush red carpet of the hotel lobby and composed himself. There was no way someone like Broadbent would act in as calculating a fashion without something serious in the works. He thought for a few seconds more, then turned back to find Nonhlanhla.

Vati waited for Tim at the bar. It was like a Mat Damon movie. He arrived. They stood casually together and ordered cokes while their hearts thumped wildly beneath thrilled rib cages. The die had been cast. Harris had reacted as planned. The ball was officially in play.

Tim shot the breeze with his young mentee as casually as he could, steering the conversation regularly to her favourite subject: Phil the graphic designer’s poetry, a theme which linked endlessly to wider ideas like the meaning of life, the notion of touring India, the trouble with consumerism, the futility of occupying Wall Street…  Of course inside Tim was screaming and jumping. This was more fun than… well, than anything he had worked on before.

Later that night Vati sat quietly on the outskirts of the corporate tent, like a good girl should. She had caught a few glimpses of Him during the early part of the evening and it was satisfying to note that the welts on his cheek were still very much in evidence. For His part, he ignored her carefully and completely. Now she sat on the edge of a world she knew she would never enter, stuck, temporarily thank God, with the events underlings: the stern black-suited security guards, the drivers and the maids and the barmen out smoking.

If she looked carefully she could see the actual people inside, although the preponderance of black clothing made it difficult to ascertain exactly who was who, or what was going on. Deals were being made, of course. That was the whole point of the corporate tent. But what deals? And to whose benefit? She would never know.

Once or twice she caught the tiniest bit of Tim’s eye, and he winked.

Then, much later, well past midnight in fact, Sizwe walked out of the tent at speed, whooped extremely loudly and gave the air three major fist pumps. 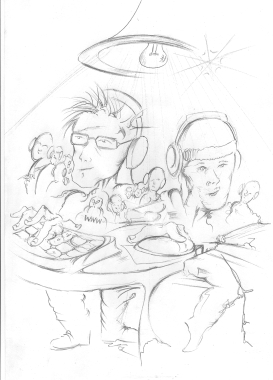