Jerm: neither left-wing nor right-wing but the middle-finger

by Herman Manson (@marklives) When the cup is half full, its hard being a satirist, as Jeremy Nell, who works under the name Jerm,  found out.

Nell, until recently the cartoonist for The New Age, had his contract terminated by editor Moegsien Williams because, says Nell, his political cartoons were, according to Williams at least, not “aligned with the paper’s vision and mission.”

The New Age, funded by the politically connected Gupta family, launched “to focus on the positive side of news,” according to its own website, and this has been construed by critics as being pro-government. Williams is the paper’s fourth editor in two years.

Nell says initially news of his effective firing from The New Age didn’t generate much attention from mainstream media (there was quite a bit of outrage in social media circles) until Zapiro took up his cause in a cartoon that takes the mickey out of the New Age editors. 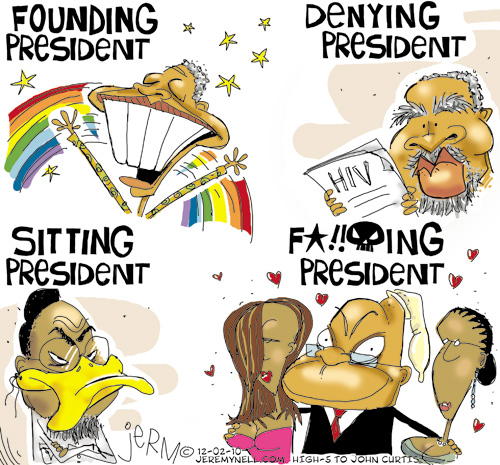 Nell posted news of his dismissal on his website shortly after it happened. He says he was initially concerned that his own credibility was at stake – getting fired in a trade as niche as his could mean the end of his career.

“What was I supposed to draw?’” asks Nell. “Rainbows, Unicorns and Rabbits? I’m a satirist!”

His unwillingness to bend to the positive spin insisted upon by the editors* of the New Age only grew his stature and reputation.

Wrote Nell on his website: “… as time (and editors) passed by, The New Age‘s editorial stance became increasingly out of sync with mine. This was particularly apparent when the current editor recently told me that he doesn’t “like cartoons [that make] political judgements or statements”. My satire can’t really function under such constraints.”

Nell had resisted instructions from the New Age to tone down cartoons critical of government. Nell says criticism of Zuma in his cartoons became a noticeable issue. This was happening, as Nell puts it, as the paper was becoming less impartial, and more overtly pro-Zuma (as opposed to merely pro-government or ruling party). 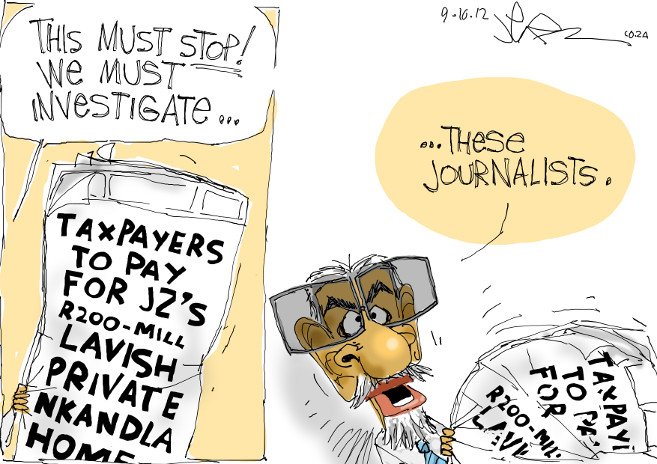 Nell doesn’t consider himself as aligned to the political left or the right. Being a cartoonist, he explains it best in this cartoon featuring two characters from The Biggish Five. “Are you left-wing or right wing?” asks the one. “I’m neither left-wing nor right-wing,” says the other before he quips “I’m the middle-finger.” The cartoon was published on Nell’s site under the heading ‘A strip that I wrote for myself.’

Nell says he got numerous offers once he left but he  decided to focus on digital media to further his career. Primedia owned Eye Witness News  (EWN) has signed him on to produce two cartoons a week (on Wednesdays and Fridays) for its website. EWN will use radio properties in the Primedia stable to drive traffic to the site and cartoons which will serve as points of discussion on-air.

Jerm fans also bombarded The Daily Maverick with requests to hire him as a cartoonist. Nell says they did make contact thinking he was orchestrating the campaign, but Nell denies playing any part in it. It says quite a lot that fans of his work would want to see him associated with the maverick cool of DM. 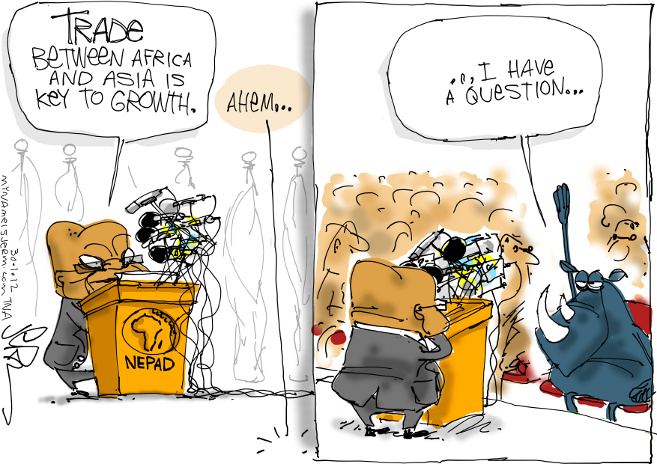 Jerm on tade with Asia via jerm.co.za

Nell published his first newspaper cartoon in The Witness newspaper five years ago. Urban Trash was a funny and not terribly PC strip that got canned for not being mainstream enough. It was followed by the more newspaper-friendly  The Biggish Five. “Doing what I like (to maintain my integrity) and doing what others like (to avoid living in a basement) is about finding the balance,” wrote Nell at the time he decided to stop drawing Urban Trash.

Before joining The New Age in 2010 Nell had worked as a cartoonist at The Times for three years. It’s here that then editor Ray Hartley (who now edits the Sunday Times) encouraged him to make the leap into political satire and cartooning.

Nell has been drawing 12-15 cartoons a week but has now slowed down to focus more on quality. He got into cartooning after he got retrenched in 2005. Not willing to face another corporate job and the hours in traffic it entails he used his savings to buy the equipment he would need. Even here he skimped – going digital because art supplies are expensive. A computer programme is a once-off investment, he explains.

It’s been quite a ride since then. Nell won Cartoonist of the Year at the 2011 Vodacom Journalism Awards on the back of his work for The New Age, and now this digital savvy cartoonist is taking his career online, which if you look at the latest ABC figures for the newspaper industry, is just as well. The New Age still doesn’t have a circulation certificate and has yet to reveal how many (or few) copies it sells.

The satirist may well have had the last laugh.

* Moegsien Williams, editor of The New Age, was invited to comment for this story. We received no response at the time of publication.

One Response to “Jerm: neither left-wing nor right-wing but the middle-finger”