With BDLive Business Day hopes to save its bacon

by Herman Manson (@marklives) Business Day recently shifted gear to relaunch as a ‘digital first’ news product rather than just the printed newspaper it’s been bargaining on to keep the brand afloat. It’s a strategy that’s long overdue and hopes to mimic some of the digital success achieved by the Financial Times (Pearson, owner of FT, also has a stake in BDFM which publishes Business Day). 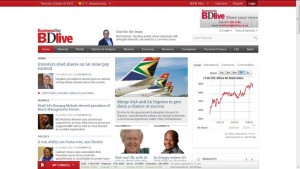 by JSE listed companies – these notices, described by critics as a forced ‘subsidy’ for print business media, is set to fall away after changes to regulations by the JSE. The industry is expected to lose a significant percentage of the estimated R200m currently spent on these notices annually.

Advertising revenue has also started shifting towards digital environments in line with developments in other economies.

Bronwen Auret, GM: BDFM Digital, agrees that those in the business of business news face challenges but she is also excited about the opportunities the new digital centric model will afford the company.

Newspapers are the least sexy media right now, say Aurent, and where to from (for now still) profitable print have been a predicament for most newspaper proprietors given the high cost of bandwidth and slower Internet uptake by the South African market.

With the uptick in usage of online and mobile thanks to more competitive pricing and competition by mobile data providers the market is shifting and the introduction of apps has made South Africans more familiar and comfortable with ecommerce.

Auret says the paper’s owners and staff had to ask themselves what it is they really produce. A paper, or content? Once they identified their business as content they could develop a strategy to ensure the business remains sustainable and build it out beyond its print media roots.

While the website traditionally contained ‘yesterday’s newspaper today’ the content strategy has shifted so that news content goes up on the site when the team have it. The printed paper itself is set to become more thoughtful.

All this has meant expanding sections of the editorial department – while Business Day used to have a person dedicated to covering markets it now has four. The political team have also been beefed up. BDLive is publishing original content at the standard of the printed paper, says Auret. Diary meetings now happen a few times a day and online and print editors sit together and sort out what goes where.

The site will see a paywall go up in early 2013 and there will be print digital and bundled subscription offers available. Don’t expect subscriptions to be costed at significantly less than the current print product . Auret says readers will be able to get print, online an app subscriptions bundled which means they no longer have to get to the office to pick up business and market news from Business Day. The brand will now be available wherever its readers find themselves. Registered readers will still have access to a limited number of free stories.

The user experience has been improved and readers now has access to a console from where they can set up or view personalised news headlines, a share watch list or clip articles to read later.

BDLive saw 11 000 registrations in its first month (August). Session duration is up as is the number of page views per visit. The iPhone and iPad apps saw 50 000 downloads between them and an Android app is on its way, says Auret.

Auret says the paper itself will continue to improve as well. Stories accessed via search and social media will still be accessible to all readers.

The site was moved from the businessday.co.za to the BDLive.co.za domain as a way to tell the market of how seriously the company takes it re-invention, says Auret. Technically changing a URL is not easy but traffic has been climbing and the team is happy with its decision.