In this interview RIM CEO Thorsten Heins tells us why BlackBerry 10 will restore faith among both consumers and investors and what makes the African market special.

Thorsten Heins, Chief Executive Officer of BlackBerry makers Research in Motion, was in Johannesburg last month to meet with mobile 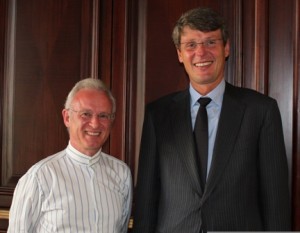 network operators and introduce them to the BlackBerry 10 devices that will be launched in the first quarter of 2013. In the only interview he gave in South Africa, he spoke frankly with MarkLives columnist and Gadget editor-in-chief Arthur Goldstuck (@art2gee) about the challenges facing RIM.

Arthur Goldstuck: South Africans right now are still very loyal to BlackBerry and brand momentum is still growing. But at the same time,  a lot of people are saying, ‘What is going  to happen to us BlackBerry users?’ It comes down to the American market, where Blackberry has imploded. The feeling is that, what happens in America, will ultimately happen here. How does Blackberry plan to recapture the American market and therefore re-instill confidence in markets like South Africa and the rest of the developing markets?

Thorsten Heins: First and foremost, we appreciate the strong commitment of our customers to us in South Africa. This is a very, very successful market. It is a clear number one market for us, but not the only one. We have Indonesia where we are number one in smartphones. In the Philippines, I don’t know how many quarters consecutively we have been number one in smartphones. So there’s a broader business base than just in South Africa that we can appreciate. This is a customer base that carries us through to the transition to BlackBerry 10 right now.

The United States is very different. The US was very much driven by a tectonic shift to full touch screens devices among consumers and to LTE (4G connectivity) in a very short time frame in the enterprise space.  All the marketing money from the carriers is going to 4G. All the major promotions: all the bus stops have a 4G sign on it. That is why we have lost and are still losing market share. But it is slowing down.

There are two routes to recapturing that market. Firstly, we are working on our installed user base. So far the upgrade ratio from BB 5 and BB 6 devices to BlackBerry 7 has increased from 8% BB 7 enterprise penetration to 22% in the last two quarters, which is really very significant.

The second thing is to get Blackberry 10 into the market and make sure it fulfills all users’ requirements, such as the full LTE experience. And there will be a touch version of it. But then we must also set BlackBerry 10 apart in terms of the user experience. So it’s not just competing on spec terms, not just competing on radio technology terms. We will go back to the market and we will, on top of that, compete on a new user paradigm that we are introducing with BlackBerry 10.

AG: Do you have a launch date yet?

TH: Last week, when we met with Verizon, they publicly stated, so its not a secret, that they will be launching Blackberry 10 in the first quarter of 2013.  I would be very, very optimistic that other US carriers will follow suit.

We have a firm date when we will hit their labs for lab testing. As with every carrier, they have different cycle times for the testing cycle to get ready for first customer shipments. We’re working with the carriers on these launch dates, but it for sure will be in the first quarter 2013.

AG: The flip side of the same question. How are you dealing with investors who clearly have abandoned the share to a large extent? Right now it’s quite symbolic that Apple has hit $700 at  the same time as RIM has fallen to 1% of that share price. Clearly, investors are worried that RIM won’t survive. How will you convince them?

TH: The bigger investors look at RIM from a different perspective. For example, if you look at Fairfax Financial Holdings, a large investment fund. Prem Watsa, who runs it, has a strategy of investing in long term value creation, and they have bought 10% of RIM’s shares.

Investors expect us to perform. But also when we showed them the strategy, when we showed them where we want to be from both the enterprise business and device point of view, they accepted our strategy. Now it’s up to us to deliver. We’re approaching the finish line for BlackBerry10 and we need to take it to a global launch and deliver on our strategy.

I understand the thoughts of investors, but we have a strategy in place for the long term. We will be a company that creates long term value. I’d say it would be different if we were only a developer or an OEM (Original Equipment Manufacturer). But BlackBerry sits in many enterprises. We have a 92% Fortune 500 installed base, and that base wants us to succeed.

Carriers right now only see two ecosystems at work: Apple, which is not open, and Android, which Samsung has monopolized. So carriers are looking forward to a third and fourth ecosystem to enter this space. They are not just inviting us to the table, but also pushing us.

I am on a world tour over four weeks to present BlackBerry 10 to carriers. I have been to Mexico, the United States, Canada, all of Europe, and now in South Africa.

South Africa is a priority one market for us, and we will acknowledge that with the launch of BlackBerry 10. There will be three waves in taking it to global markets, and South Africa and Nigeria are in the top range of Wave 1 launches. We will pay tribute to our customers here by delivering BlackBerry 10 in South Africa when it is launched.

There’s trust building in a turnaround of RIM in the United States. In the US, we are clearly a turnaround case. In the rest of the world, we are still growing our overall global subscriber base. Other regions in the world are more than compensating for losses in the USA. The global trend we reported at the end of the last quarter continues.

AG: Where else in Africa are you seeing this trend?

TH: It applies to South Africa and Nigeria. I want to say thank you to the South African customers of BlackBerry – they have created a tremendous success story, and they deserve our thanks and respect.

Nigeria is the second country in Africa to repeat this trend. Kenya is a country we are entering right now. Africa has huge growth potential, from north to south.

AG: And in other developing markets?

TH: What we are doing in the Philippines and Indonesia, we are showing that BlackBerry is not just a communications tool, but also a social networking tool. We are also showing that BlackBerry is not just a media device. Our focus is on what we call BlackBerry People. It’s for people who always want to be on top of their game. We want it to define success, we want it to be the tool, globally, that allows people to achieve their successes.  This value proposition works well in those economies that are starting to grow, in developing markets like Nigeria and Indonesia.

AG: In South Africa we first saw executives begin using BlackBerry, and then it took off among teenagers, so that you often had a situation where one parent and a child were both on BBM, and the other parent felt obliged to move to BlackBerry to take advantage of BBM communications. It’s a phenomenon one can call the BlackBerry Family, and is part of the reason for the brand’s success here. Have you found that elsewhere?

Indonesia is a second example.  We are finding that the BBM PIN number has substituted the phone number in many cases, and you see it on taxis and buses. The term, “PIN me”, has become one of the common terms there.

The BBM subscriber base is still growing worldwide, along with BlackBerry services. That’s why I decided to invest in BBM and, with BlackBerry 10, take it to new levels so that people can get more enjoyment from it.

AG: We have a fair idea of what has made BlackBerry work in South Africa. What is your perspective? Why do you believe this market is so successful for BlackBerry?

TH: I think it’s the combination of certain values. Firstly, it’s BBM, which lets you share anything you want, at no additional cost. Secondly, it’s the right device and the right price point. It is affordable. Third is the compression of BlackBerry data, which saves a lot of money on subscription and roaming, and makes the BlackBerry Internet Service affordable. Several factors come together in South Africa, and then we have a fantastic team that executes well, with good customer relations management, and good marketing.

To me, it’s refreshing to come to South Africa from the US where I get more punches thrown from the media than this kind of question. And I come to the airport and I see BlackBerry adverts and it’s brand related, not about the device itself. I took a photo of that for myself.

AG: BlackBerry’s effectiveness in data compression has been a key to network acceptance of unlimited data deals. Will that technology evolve further?

TH: We will set our own trends in term of supporting our customer base. We have to move forward with new features and new technologies. But we will always make sure that what we create is, in a technical way, what is most beneficial to customers. We have our capabilities, and we are looking at how to apply this to future developments. That is coming, no doubt.

Tomorrow:  Competing with Apple, how the BlackBerry’s notorious freezes have been overcome, and the company’s secret weapon.

One Response to “Thorsten Heins interview Pt 1: BlackBerry in Africa”