by Kim Penstone When Abdulla Miya resigned from Net#work BBDO in October 2011, he didn’t have a job lined up at another agency. In fact, on the morning that he was due to meet with agency heads Keith Shipley and Mike Schalit to put in his resignation, he heard that his tentative plans for a new business venture hadn’t panned out. But he resigned anyway.

At the time of his resignation, he was MD of Net#work BBDO, and over the previous 14 years at the agency, had played an integral role in the 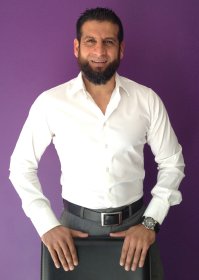 agency’s phenomenal success and growth. He decided the time was right to go it alone, and announced that he would start his own strategic consultancy in 2012. He did not have a firm business plan or even one client to his name.

Maybe Miya is an eternal optimist, but he puts it down to faith. Partly external, because he is and has always been, a very spiritual person. But also internal, because after 23 years in the advertising industry, he had earned a solid and outstanding reputation as that rare breed of advertising man who could bring together the often opposing worlds of business strategy and creative communication.

“I had faith that what is out there for you will come to you,” says Miya. “But I also put some practical measures in place – I had a financial buffer that would hold out for six months, and gave myself until June 2012 to find some clients to pay my salary going forward.”

Unsurprisingly, he had his first client secured before he left the Net#work building. (With the blessing and knowledge of Shipley and Schalit. He gave the agency three months notice, and only officially left the building at the end of December 2011.)

In January 2012, Miya and Associates was born.

“It’s a very uncreative name, but it encapsulates how we work. Me, plus a team of highly specialised associates, who I call on if and when I require their expertise,” says Miya.

Building on two decades of experience, and his intimate understanding of how advertising agencies work, he decided there was a gap in the market – more specifically a gap in the advertising industry, between business goals and communication outputs. Miya and Associates was pitched to bridge this gap.

“I like to think of it as an ‘inside out’ model,” says Miya. He (and his associates) work inside his clients’ marketing departments, alongside their existing teams, and with their existing agencies. Sometimes he takes on the role of marketing director, but he always ensures that he is in direct contact with the man or woman who is driving the business. His aim, and his undertaking to his clients, is to ensure that the business goals set out at the top are directly translated into the resulting communications.

“I’m not here to take pot shots at the advertising industry, it’s not my style. But if there is a problem in the industry, it is that agencies are too far down the food chain to get their teeth into the meat of business strategy,” says Miya. “The chain of command is too long, it’s natural that bits and pieces would fall between the cracks.”

By working inside client organisations and with decision makers, Miya believes that he gains a better understanding of business goals. And because he understands how the creative industry ticks, he is uniquely suited to translating these goals into advertising speak.

“I ensure that nothing gets lost in the translation, that there isn’t a disconnect between the client and the agency, and that no one is left sitting dumbstruck at final presentation, wondering how brief A turned into creative Q.”

Miya isn’t knocking creativity. In fact, he remains a staunch proponent of the effectiveness of creative work – he is just adamant that the work should support the business goals, and not the other way around.

And so far so good. Clients at the time of writing include Woolworths, Glomail, Broadway Sweets and Mobicell.

At Woolworths he is working alongside the recently-launched internal agency. At Glomail, he is functioning more as a marketing director. At Broadway he and his team are managing the full marketing and communications strategy. The business model is fluid. And it seems to suit both Miya and his clients.

All have given him long-term contracts, providing Miya with a sense of security, and fresh faith that he is adding real value to his clients’ businesses.

“There’s an enormous sense of freedom in being able to work according to my own rules, use my own approach, and focus on my real passions,” says Miya.