by Herman Manson (@marklives) Ravi Naidoo launched South Africa’s signature event for the global design stage, the Design Indaba, in 1995, with 200 attendees at the Mount Nelson Hotel in Cape Town.

The Indaba, and Naidoo, has come a long way since then, adding events that celebrate design to the now hugely prestigious 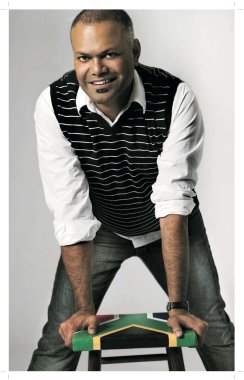 annual conference, including simulcasts to several cities, an expo, a curated film festival and a music event, A Taste of Sónar, which also has a strong visual component.

Combined more than 52 000 people interacted with events around the 2012 Design Indaba. Of those 3000 attended the film festival at the Labia in Cape Town and 2800 attended simulcast screenings of the conference in Cape Town, Johannesburg and Durban.

Over the past four years Design Indaba has also contributed a Billion Rand (including R300 million this year) to the economy according to research findings by a UCT Graduate School of Business report. Naidoo says these are not thumb-suck figures on average spend per visitor to the city, but is based primarily on hard sales figures from the expo floor, which so far this year exceeded R200 million, and attracted 40 232 visitors.

Naidoo spends as much as three months a year travelling to creative events around the globe, representing not only the Design Indaba, but also the South African design community. Naidoo describes this ‘ambassadorship’ as a “lovely self imposed job to have.”

Naidoo also underscores the importance of maintaining a commercial link between commerce and design, saying the sponsorship of the conference by major brands such as ABSA, MTN, Grolsch and Woolworths shows the value brands are placing on design and creativity in business.

In terms of the expo, which this year featured 367 exhibitors, Naidoo says he has seen the emergence of classically trained artisans over recent years as opposed to “hobbyists and tinkerers” who tended to dominate in its early years.

For the conference Naidoo tags speakers during his travels, sometimes booking them up to two years in advance, depending on their fit with a specific emergent theme for an event and their schedules.

Architects, like Francis Kéré (Burkina Faso), have been stealing the show over the last three years at least, and tend to be the ones who get delegates to their feet for standing ovations. Naidoo attributes this to cities being the most important theatre for design right now. “Solving problems in cities means solving many of the problems we face today, be in terms of housing, food security, education or a sustainable environment – and if the design theatres are cities then architects are their biggest actors,” says Naidoo.

Naidoo chooses architects with creative potency and a sense of empathy in their work which plainly speaks to delegates.

He meets all the invited speakers personally and refuses to work through booking agents. He and his staff travel the world listening, watching and identifying the best speakers available, and Naidoo believes you can only benchmark against the best by being there yourself and experiencing what the world has to offer.

He finds it unfortunate that so many in the creative industry never make it to events other than award shows – “creativity doesn’t live in Cannes,” says Naidoo, referencing that most famous of advertising award shows.

Instead he prefers ‘forums for sharing’ be they music festivals like Sonar in Barcelona or the Mistura food festival in Lima, Peru (it showcases Peruvian ingredients, traditional dishes and culinary trends). It’s authentic creativity Naidoo spends his time finding.

This brings us to glitter pork, cupcakes and Martha Stewart. Stewart, a formidable business and design force in her own right, sparked the first and only delegate walk-out in the history of Design Indaba in 2010 with a presentation so disconnected from her audience that delegates in both the simulcast room and the main auditorium simply got up and walked out in droves. They congregated around a Twitter fall reading insulting tweets (dubbed a twitterslap) from delegates sticking it out inside.

“Listening to Martha talk about her new paint line is as exciting as watching it dry!” tweeted one delegate. A new hashtag, #marthaescape, was born that day.

For Naidoo it must have been a harrowing experience, although commercially astute, his enthusiasm for the event goes well beyond money in the bank, and it is obviously a passion. Yet during our interview he is the one who brings up the subject (I was one of those delegates sticking it out with Martha and tweeting away), saying he wants to invite her back to redeem herself. Stewart is amazing one-on-one says Naidoo, she blew him away at their initial meeting, and he had hoped she would unpack the alchemy possible between enterprise and creativity. If she does return she hopefully will do so without her corporate minders.

Naidoo is most proud of the Design Indaba’s  Your Street project because it really manifests what Design Indaba is all about – making a difference on the ground. For designers it offers an opportunity to be relevant and involved in their communities. The challenge offers designers to make a tangible difference in their immediate community by “loving and improving” their street. The initiative has been rolled out in Jozi, Cape Town, Durban and now in Eindhoven, Holland.

Your Street is about incentivising the future we want to see, says Naidoo, rather than reward what is already past (like at those other ‘creative’ award shows he doesn’t need to add).

Next year Design Indaba will be doubling the size of the music festival and is already negotiating the acts. The conference simulcast will be expanded to Windhoek and the intention is for it to ultimately be broadcast into ten cities across the continent.

For the Design Indaba its range of former speakers also serves as ambassadors for the event, hooking in more experts, and it is great to see that brain trust engaging with South African audiences. Hopefully the Indaba will leverage their practical skills to a greater extent through workshops – like with Your Street the event can make a difference to the local design economy beyond inspiring design solutions by also contributing to the practical upskilling of  creatives.