by Herman Manson (@marklives) Zando, a new online fashion ecommerce play funded by Germany-based Rocket Internet, launched three months ago and is literally aiming to rocket through the online retail market to be in the same league like services such as Kalahari.net and Takelot.com. 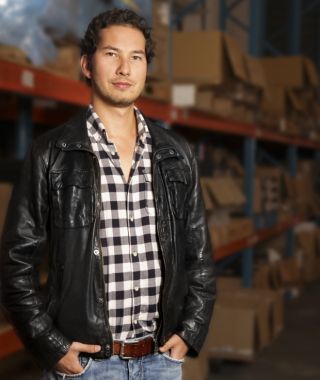 already, according to Eugen Petersen, MD and co-founder at Zando.

Petersen says the site has its own photo studio and warehouse, and uses a private courier company with branded vehicles and uniforms to deliver merchandise. The couriers also wait at doors while customers fit their purchases – so they can return them if they don’t.

Zando is a South African company, Petersen insists, but with the backing of a global network of knowledge (and cash) via its German backers, giving it access to blueprints and best practice to quickly set up an online retail business. Rocket Internet are investors on several German and French online retailers, including German online shoe retailer Zalando, and fashion portal 7trends, and the template for Zando seems to have been taken from these sites.

Petersen says they researched the local retail market, infrastructure and ecommerce environment and all signs pointed towards a rapid uptake in ecommerce in the local market. The ecommerce market is already growing at 30-40% a year, he says. SA also represented a relatively empty playing field – in Germany there are over 80 000 ecommerce companies – while South Africans like their fashion as much as anyplace else in the world.

SA, says Petersen, needs a fashion supermarket, and Zando aims to establish this.

Petersen and his team wants to build a ‘local Asos‘ – a reference to the online fashion and beauty retailer that attracts 18.5 million unique visitors a month and had 4.0 million active customers in 2011.

At the moment, the local/international product brand ratio on the site stands at 50/50, with the share of international brands expected to grow, according to Petersen. Zando currently has connections with around 200 product brands.

Fashion is aimed at the broader market. Shipping is free if the basket is worth R150 or more. Quality control is a major focus, says Petersen, and there have been few complaints so far. The store competes on convenience and service, Petersen continues, though the price might be a little cheaper than in regular stores, but Zando is not a discount shop. If your product is a day late on delivery you will get a 50% discount – two days late and it’s free – says Petersen.

Innovations include a cash-on-delivery payment option in main centres and the already-mentioned option of trying products on at home while the delivery van waits for you, and returning them if it doesn’t fit.

A marketing campaign is being launched that includes radio spots and magazine advertising in targeted titles such as Cosmo and Elle, with the assistance of the Cape Town agency 60layersofcake. Petersen says the agency won the business because of constant engagement during the pitch process – it kept coming back with questions and requests for more information – something some bigger agencies could not be bothered to do.

Convincing consumers that online fashion retailing is a no-risk proposition will be a major marketing focus.

Rocket Internet is known for bringing ‘cloned’ companies to market in different territories. It also uses infrastructure established for one online retailer to launch others in quick succession. In SA it has already launched, with various degrees of publicity, furniture retailer 5rooms.com; Glossybox which delivers a monthly box of beauty products to your door; and accommodation site Wimdu. Social gift card store DropGifts is reportedly on its way.

Petersen says there are a number of misconceptions around Zando’s launch in SA that need to be cleared up. First, the management team (average age of 28) is here to stay; they intend building a business, and the idea isn’t to jet in and then jet out again. And while it might have a famous backer in Rocket, Zando is an independent entity and not associated with existing online retailers.

Petersen promises a transparent and open culture at Zando – quite different from Rocket, which is infamously loathe to talk to tech blogs, for example. The start-up atmosphere and a low hierarchy will enable quick decision making, Petersen promises, to the ultimate benefit of consumers.