by Samora Chapman Shani Judes, a Cape Town based art agent/curator has recently been slipping through borders. Traversing the entire country, pasting portraits all over Azania’s most renowned townships. If Shani were a street artist, I reckon she’d be king. But the nationwide campaign wasn’t a quest to get her name up. It was a guerrilla ad campaign for a new creative platform called BOZZA, a cellphone app that enables artists to create a profile, showcase their work and network with other creatives. 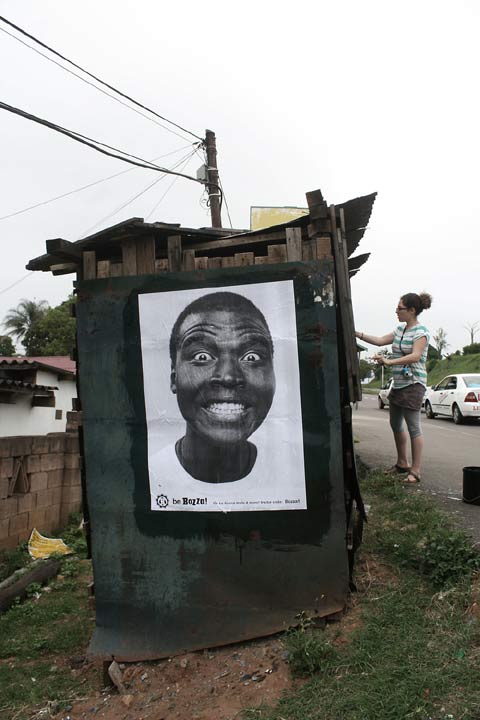 The ad campaign involved shooting portraits of regular people, then printing them out on massive pieces of paper and pasting them on every available surface in the ‘kasi. So the images were plastered across the township, and the portraits became the faces of the brand itself.

The Durban leg of the campaign focused on Umlazi, and Andrew McGibbon was commissioned to shoot the portraits. He shot over 100 portraits of members of the Umlazi community, from school children and young entrepreneurs, to wizened old ndodas.

I joined the pasting crew, lugging around litres of wallpaper glue, using my giraffe reach to slap up posters on any surface I could find. The process of putting up the posters was somewhat haphazard and guerrilla, bordering slightly on illegal. Verbal permission was granted for many of the posters pasted on shops and containers, but we pasted entire bridges, taxi ranks and municipal walls; coming at times, into direct competition with faded ANC election posters. Like a great violent clash of artistic, commercial and state forces!

The reaction from locals was mixed. One day when we were pasting a schoolgirl walked past and said proudly: “Hey that’s my sister! I’ll tell her that her picture is here.” Another old man who runs a tailoring business out of his combi said of his portrait pasted near Max’s Lifestyle tavern (the epicentre of Umlazi), “Yes I am very proud! But my wife, she said they must take it down. I think she is jealous.” 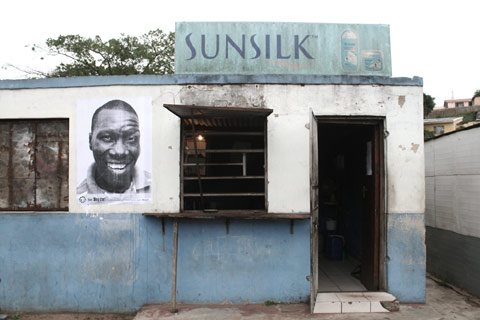 I was continuously on edge, ready to kick down like a killer on the run. If we had been doing street art in broad daylight, or pasting in the squeaky clean upper class ‘burbs of Musgrave or Morningside, there’s no way in hell we would have gotten away with it. “I’ve got a kid,” I kept moaning like a pussy. “I can’t be going to jail for this shit!”

The campaign drew a fine line between promoting ordinary people, and exploiting them for a commercial endeavour that would not necessarily benefit them in any way. But it also promoted an artistic and very transgressive approach to advertising.

Mahala: Can you explain what you do as an art agent/curator/project manager? (I’m not sure how you define your job, ‘cause you’re quite an anomaly!) 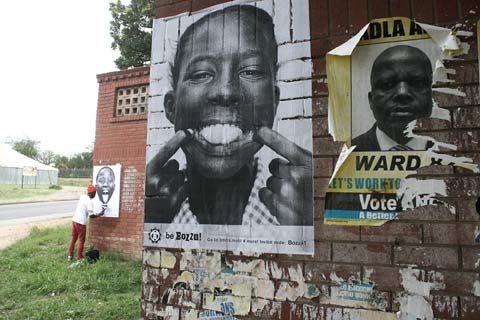 Are you an artist yourself and how did you get into pasting?

We are all artists – my art is project management. I got into pasting by watching JR and other wheat paste artists for years and last year JR sent a team to Cape Town to do some portrait pasting. I was the project manager here on the ground, which is where I learnt how to do large-scale pastes. After that, I wanted to do something where lots of creatives could get involved so I curated a project called PASTE. I got 18 artists to design work around the theme of ‘Khayelitsha culture’ and we pasted these large scale in Khayelitsha and the city centre, hoping to create some type of artistic exchange and inclusion.

Explain the concept behind the Bozza campaign…

The idea was inspired by the Inside Out Project [a global participatory art project initiated by street artist JR… black and white photographic portraits pasted in the public domain; transforming messages of personal identity into pieces of artistic work]. Bozza came to me with a couple of ideas and together we decided to pursue this concept as I fully believe in its effects. The fact that it includes community really appeals to me and to Bozza as the client.

Bozza is a mobile app where one can gain access to local content. It’s going to be revolutionary in the townships of South Africa. As an art curator, I can now easily find artists, musicians, poets from our townships – which has previously been incredibly difficult – so I think Bozza is going to help creatives to connect to the people they usually couldn’t gain access to.

Describe the different locations… how was the vibe different in each township? Did you encounter any heavy situations, since a lot of the places you went to are generally perceived as being dangerous?

We started off with Umlazi in Durban, headed to Jo’burg to Soweto and Alex, then Bloemfontein, PE and Cape Town. All were incredibly different. Umlazi is an awesome township with loads of very cool young creatives. Soweto’s not a township at all. It’s full-on housing, malls, universities, incredible parks and community centres. With all the housing and infrastructure comes security walls like in the suburbs, so there was a real lack of community in Soweto. I didn’t hear people singing, or see the usual African culture… so westernisation is totally stripping people of their culture. Bloem and PE were uneventful and I don’t really have much to say about them! 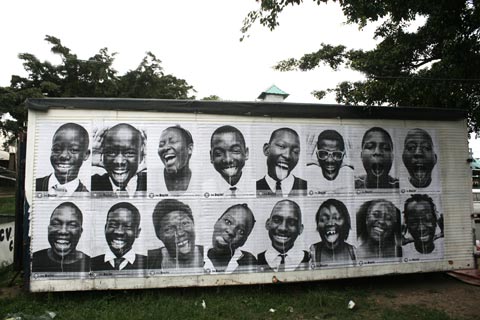 Cape Town was rad – we were in Gugs and it was funnily enough the only place we ran into a safety issue. We were by Nyanga Station which boarders the Cape Flats. My team were all facing a wall pasting and I was standing a couple of feet back when suddenly I felt my camera being lifted. So I grabbed it and turned around to find a guy from the flats trying to rob me. Here we are adding some cool art to the community and getting robbed at the same time. It really made me aware of the desperation that’s out there… and the conflict on the border between the ‘forgotten’ coloured community and the black community. The Inside Out project last year with JR focused on this racism between the black and the coloured community in Hout Bay – with BEE coming into action the coloured community can’t find work in and around the harbour ,and all the kids go to school together and don’t talk to one another because their parents are harbouring hatred and racism. South Africa has been so focused on uplifting the black community… but the coloured community gets totally forgotten about. Even when you are doing something positive in a community, there still is that desperation and you got to watch your back always.

Was this a purely commercial pursuit or do you reckon it had value as an artistic endeavour?

It’s a mix – it had its commercial value due to the fact that Bozza is new and is trying to get users, but Bozza is something for the artistic community. The project got over 20 people (both from the communities and professionals) good paying work. It brought many people together that wouldn’t have necessarily ever worked together, it taught the ambassadors how to paste, it taught me as the project manager an enormous amount about the different townships and how different people react to different projects.

Were the ‘models’ paid or was involvement voluntary? How did the photographers manage to recruit so many willing faces… did they have to explain the concept of the campaign?

The people who were photographed didn’t get paid; they had the choice to do it. The idea was to get community leaders, people who run shops, musicians and so on. Together the photographers and the ambassadors got people involved. It really was just about creating some beauty in our townships… the portraits were fun, really well shot beautiful images.

A lot of the posters in Umlazi were torn down and scratched out. Why do you think some people reacted so negatively and did anything similar happen in the other locations?

Some were torn down in Umlazi due to property owner permission. In two cases we thought the person we were talking to was the owner of the container, but it turned out they weren’t and they didn’t actually have the right to allow us to paste. The next day, the posters were torn down. So that was something on our side that could have been avoided. In Alex we had some issues with them being torn down and as far as I understand it was a political issue. Also the kids in the townships play this game to see who can pull down the most posters – so it was really a mix of things.

How were you received? Did you have any issues of language or cultural barriers?

People were generally great and welcoming. I did have difficulties with communication at times… I can’t speak Zulu or any of our other languages so it was difficult in Durban and Jo’burg. At least in Cape Town I can say a couple of words in Xhosa or Afrikaans. But I had great ambassadors from each area.

Are you still pasting? Any interesting projects currently under way?

I did a solo show for an artist in Cape Town in December and then an awesome PASTE. with the Butterfly Art Project. We had 70 children do body maps and then we pasted them in the township, so the kids got to put their art up outside in the community.