Cameron Platter is a relatively young (read 32) artist who lives and works in Ballito, the little holiday town just north of Durban that is equal parts Bible belt and surfers’ paradise. Platter has worked steadily at his art for over a decade and his dedication and effort are starting to pay big dividends. 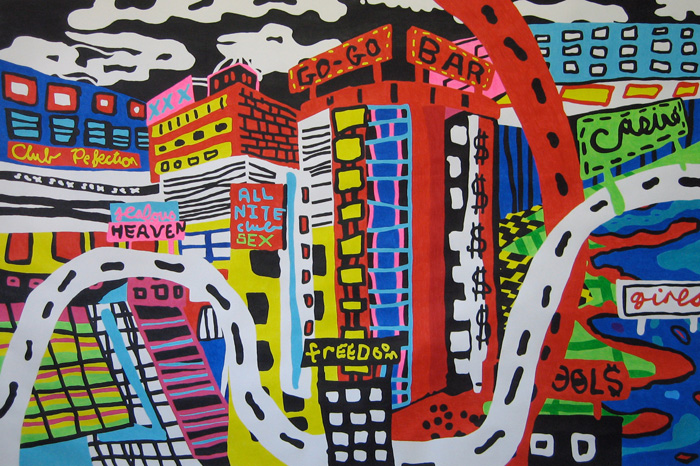 Cameron Platter - jealous is the freedom of fools

His work is included in prominent public collections in Europe and America, he is regularly invited to participate in international art fairs and biennales and has had a number of solo shows at home and abroad. His work is highly original, distinctive and troubling in all the right ways. He’s easy going, has a wicked sense of humour and can cook a pig underground. Here he has a heart to heart with Richard Hart.

Cameron Platter: Ballito? Argghh… Ballito is Boksburg by the sea, with worse architecture…I like to think I work in Shaka’s Rock. It just sounds nicer. The Bible belt thing is true. We also have an autobodyshop that doubles as a church, which is next to a braai and rib shop, which is opposite the Cash Crusaders, next to the discount bottle store.

Richard Hart: These days you pursue the solitary life of a full-time artist, but it wasn’t always this way. In fact I recall hearing that you showed massive promise as a young commercials director. Can you tell us a little about those days and why you chose to give up what most would consider a pretty glamorous, high-rolling career for that of the artist?

CP: The film gig was a brief blip. It did have its perks: people called me ‘sir’, I had my own office overlooking Greenmarket Square and someone who made me coffee. But I was astounded at the braindeadness, self-importance, and brazen stupidity of most of the people that worked in that industry.

RH: That’s quite an indictment, and I’m sure well deserved. However I’m sure many would have the same to say for the art world. Maybe it’s just a question of where you find yourself and with whom?

CP: It was certainly my experience of the advertising and film industries. I’m sure there’s plenty of great, inspiring stuff out there. I didn’t come across it, though. My problem is that the vast majority of the advertising business is all for dumbing down – people not giving a shit about doing the right thing, fuelling an obsession for eating KFC and buying cellphones and cars and cash loans and penis enlargers on credit. Then again I suppose it feeds my art, so I revel in it too…

RH: From the get-go you seem to have had a very clear idea of your vision, your own personal iconography as an artist. Can you tell me a bit about how you got to where you’re at.

CP: Art school taught me that everything fun, anything involving colour, and especially, drawing – was BAD and was never to be done, under any circumstances, ever. So naturally, after graduating (just) and mopping restaurant floors for a couple of years, I decided to have fun, love colour, and make some drawings. And not worry too much about what people thought. Crocodiles, Killer Transvestite Zebras from Outer Space, Minibar/ ATM/ Soundsystems, Penis Enlargement ads, Porn, Storytelling, Films, Rudeness, and Lewdness all evolved quite naturally from that decision. I couldn’t tell you what I will be making in a year’s time. Although I have a plan, it always deviates from the blueprint. Any artist who claims to be absolutely sure of where they’re going is lying.

RH: Yes indeed. But those two sculptures on your bedside table must surely bring on feelings of inadequacy, or are you completely unthreatened by two foot high shiny black phalluses?

CP: No inadequacy feelings whatsoever. I hardly ever think about art while having sex…

RH: You clearly think about sex plenty when making art though?

CP: Dude, you’re too good…I can’t come back at that! Although a cold shower before the studio sometimes works…If I want to get serious work done.

RH: Your work has a very optimistic feel; bright, flat colours, characters that could easily come from childrens’ books, plenty of humour. Yet you work in a small studio that gets so hot in the summer that you have to strip down to your jocks. You make massive pictures that are hand coloured using pencil crayons. It all seems pretty arduous – where does the joy come from?

CP: Joy? My work is darkly satirical, paranoid, and explores the futility of our existence. Sitting in a sweltering studio, in underpants, with mosquitoes, aids reflection on these doom and gloom thoughts.

RH: A lot of children’s programmes (like The Magic Roundabout back in the 70s) work on two levels, one that is light and fun and aimed at the kids, and another that communicates a darker message. I think your work operates like this. On one level it is just a lot of fun – it is easy to fall for a crocodile in boots and a hat even if he’s toting an AK 47 and abusing his women. I think the bright colours and the humour are a good foil for your deeper intentions. Is it a calculated strategy or do you simply sit back and channel what’s coming through?

CP: I don’t think there’s too much strategy, it’s definitely more about sitting back and channeling real life into some sort of fiction. Although it is rather nice to lure people in with bright colours, and a seemingly cheerful disposition, and then sucker-punch them in the balls. And of course it’s easier for most people to watch an animated crocodile ass-fuck a prostitute and then shoot her in the head. You couldn’t do that with real people. Still, in spite of the darker side of my work, I absolutely love what I do, and wouldn’t trade it for anything.

RH: That love comes through – maybe more than the paranoia and the futility of our existence. A few months back I was lurking about in a gallery while the owner was showing your stuff to a collector and his wife. They laughed a lot.

CP: Although they may have laughed a lot, I don’t think they bought anything.

RH: Maybe not, but I’ve never bought a Goya…doesn’t stop me gawking in wonder. With such a singular vision of your own I would imagine you’d be very selective in the type of work that you like and the artists that inspire you. Who’s getting you hard right now and why?

CP: Although others might not think of them as artists, I’d definitely call them masters – in no particular order: whoever designed the IFP election poster; ditto for the layout genius of the life insurance/ need cash/loans ads in the Daily Sun; for sheer chutzpah, the Minister of Co-operative Governance and Traditional Affairs; and of course, Prince Barrack Hussein. Oh, and Michelangelo (for David’s penis).

RH: So can we take from this that you’re not really very enamored with art that’s being made these days?

CP: Generally I don’t look at too many artists’ work. I think that you find far more interesting stuff walking around, keeping your eyes and ears open. Obviously, I’m aware of what’s happening locally and internationally but I don’t pay too much attention to it. I find that it can be unhealthy and distract your own vision. And a lot of the stuff is pretty mediocre – you really have to wade through the sludge to find that chicken nugget.

RH: You’re so right. I made it to the Frieze art fair in London last year and was appalled at how much sludge there was. Here you have the best and the brightest galleries in the world supposedly showcasing the best and the brightest artists in the world and I couldn’t help wondering if anything at that fair would be in the permanent collection of Tate Modern or MoMA in 20 years’ time. How does the art world function when so much seems to be a case of the emperor’s new clothes?

CP: I think it’s all about who’s fucking who. And then, on the rare occasion, it’s about the art!