Twitter’s value to breaking news quickly and efficiently is beyond doubt, but the accuracy of the news being reported is far from perfect.

This weekend, Twitter was abuzz with the news that South Africa’s former national police commissioner, Jackie Selebi, was found guilty of both charges he was facing. But the initial buzz on Twitter was wrong, or at least not 100% accurate.

At first it was reported on Twitter that he was found guilty on charges of corruption and obstruction of justice. What happened initially was that journalists reporting from the courthouse got the first tweet wrong, which meant all the retweets got it wrong as well. Later, updates indicated he was found guilty of corruption but not obstruction of justice.

TV reportedly didn’t do much better though, with the e.TV news channel apparently having to correct itself after a somewhat confusing (for those who haven’t studied law at least) judgment by Judge Joffe. Like Twitter, TV is live if it has time to prepare for the broadcast in advance. A debate on the technical details of the judgment has already broken out on Twitter, which isn’t helping much to limit the confusion factor. 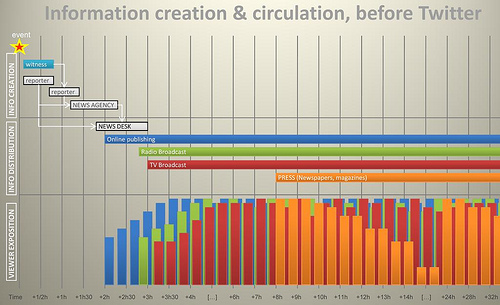 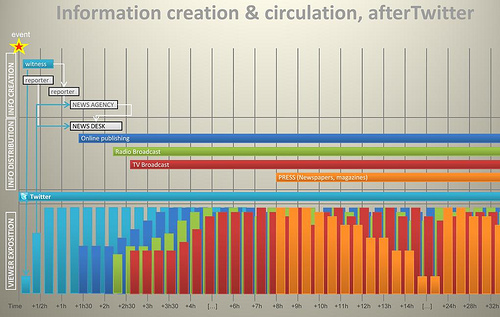 The info graphics clearly highlight how quickly news breaks. What they don’t show is how much confusion often surrounds a breaking news event, and how editors play an important role in checking that stories are factually correct before they release them to the public at large.

People in the news business love breaking news. This is why we are arming more and more journalists with the equipment to live tweet and blog major news events. And it is entirely true that newspapers and news sites lag Twitter in breaking news. That is because it takes time to write anything longer than 140 characters, to get it fact-checked, and then, to publish/broadcast it to a wider world.

With Twitter able to deliver news quickly and to a potentially huge audience due to its viral nature, already-pressured newsrooms are under increasing pressure to get content out, and to get it out fast.
But few are asking what this is doing to journalistic ethics. For example, can media organisations and journalists delete inaccurate tweets that were posted without revealing they did so?

Usually when removing content from a website or withdrawing a story from a newspaper, the editors would admit that they did so and give reasons behind their decision. This is obviously important for the reading public as it holds the media accountable for what they publish. Nobody likes putting their name to that withdrawal notice. Not only does it means a journalist messed up; it also means the editors missed a beat as well.

Public relations practitioners are already talking about ‘breaking’ news of an event (staged for commercial benefit) via Twitter. According to the earlier-mentioned info graphic, they would position themselves to serve as ‘witnesses,’ in order for their ‘news’ to be happily retweeted by the rest of us, and effectively bypassing any editorial scrutiny.

Journalists and media organisations should update their professional codes of conduct to take cognisance of the fact that the way we are reporting news is changing.

Of course journalists themselves are being side-stepped by bloggers, citizen reporters and the like. These are people who have little interest in what is viewed as “old-school” media practice. Even journalists would admit to relaxing their own rules for their blogs, Twitter feeds and other interweb media.

Society isn’t always well-served by the media. Some stories never see the light of day because of commercial self interest or political sympathies. In other instances, journalists become mouthpieces for propaganda.

Social media could potentially help counter-act some of these issues. On the other hand, it could also cement them even further by turning critical, thought-provoking voices into 140 character sound bytes, typed on the go.

The story was originally printed on Memeburn.com and republished on Bizcommunity.com