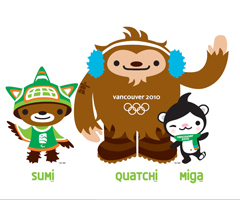 Here is a look at the other 2010 mascots – for the Winter Games that will be taking place Vancouver. The mascots were inspired by traditional Canadian ‘First Nations’ creatures. Miga (a mythical sea bear), Quatchi (a sasquatch) and Sumi (an animal-guardian spirit). They even have a sidekick called Mukmuk, a rare Vancouver Island marmot, which pops from time to time.

Interesting and not obvious at all these mascots takes mythical creatures from ancient Canadian cultures and makes them accessible to a modern audience.