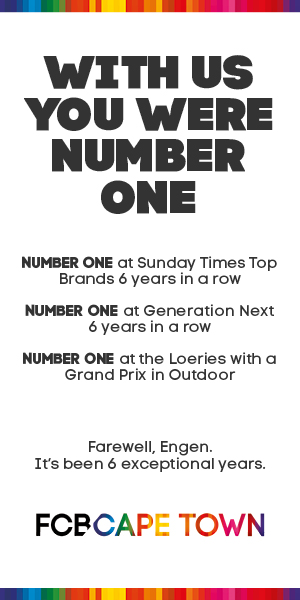 by Herman Manson (@marklives) Engen has ended its relationship with FCB Cape Town after a six-year run. The preferred bidder is Saatchi & Saatchi South Africa (which means the agency has won the pitch but a contract has yet to be signed).

The loss has come as a shock to the agency, says Brett Morris, GCEO and GCCO at FCB Africa, given its strong relationship with Engen plus its strong track record with the brand. Engen was recently voted the “Coolest Petroleum Brand” in the Sunday Times Generation Next awards for the eighth consecutive year. In 2016, the brand took the Sunday Times Top Brands award in the petrol station category for its sixth year in a row.

According to Morris, the agency had felt it had had a good chance to hold onto the business when it recently came up for review. It had been pitching against Saatchi & Saatchi, King James Group, M&C Saatchi Abel and 34.

There will be a significant impact on the Cape Town agency, with close on two dozen positions being affected. Morris says everything possible will be done to either place staff inside the network or to assist in their transfer to the new agency, where and if required. FCB Cape Town’s client list includes the Western Cape Government and Wesgro, as well as a number of Distell and Tiger brand portfolios.

Saatchi & Saatchi CEO, John Dixon, would not comment at this stage.