Ad of the Week with Oresti Patricios – Miracle on the Hudson

Ad of the Week with Oresti Patricios – Miracle on the Hudson

If this advert doesn’t bring tears to your eyes, or at the very least a lump to your throat, perhaps you need to check yourself in for some psychological observation. It’s rare that an advert gives me a sucker punch, but the new television for Nedgroup did just that. It took my breath away and reminded me of what a powerful story can do to communicate brand values.

Brandlab, with production company Giant Films produced the fantastic high-drama recreation of a story that captured the world’s attention a couple of years ago. It is the story of a dramatic event that made global headlines on January 15 2009, when Captain Chesley B “Sully” Sullenberger made an emergency landing of his Airbus A320-214 in the Hudson River, in New York. The ad celebrates this veteran pilot’s heroic and professional actions in the face of extreme danger, actions based on rational thinking and experience that saved the lives of 155 people.

The message of the commercial is: “In the right hands, anything is possible.”

Filmed in New York City, the ad starts with aerial footage over the city, and follows the flight path of the plane. Cut to Capt. Sullenberger, on 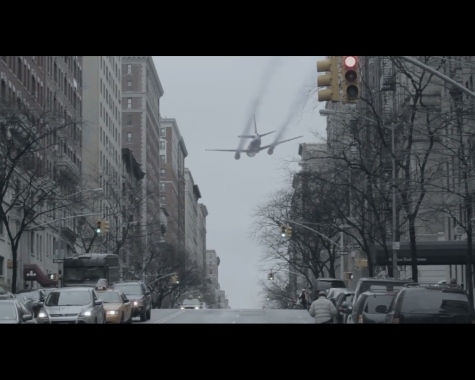 location on the banks of the Hudson. “It was an ordinary winter’s day,” he tells us. Cut to various scenes of typical wintry New York activity: taxi drivers getting into their cars; kids crossing the street with their teacher; a dancer rehearsing. A plane takes off, and air traffic controllers speak to the pilot of Flight 1549.

“I guess I had spent my whole life preparing for that moment,” says Sully, as we see a flock of wild geese flying into the path of the airplane. The bird strike puts both of the engines out of commission, and the plane starts descending towards the city.

People on the ground look up at the stricken Airbus – its engines spewing smoke – as it flies low over buildings in New York. There is a great shot of the plane passing the tall windows of a dance studio, and the dancers carrying on obliviously, as the drama unfolds outside their class.

The advert cuts to the air traffic controller saying, “He said he was going into the Hudson.” The plane ‘ditches’ into the water, sending out huge waves and sprays of water. “I’m not a hero,” declares Sully, “I’m just a pilot who used 30 years of experience to do my job.”

The screen then fades to the Nedgroup green, with the text, “In the right hands, anything is possible.”

“The point of the commercial,” said Brandlab’s creative director, Mark Fisher, “was to create an analogy or a metaphor for best-of-breed. True stories that were inspirational and relevant and spoke to our target markets.”

The director of the piece, Ian Gabriel, seemed to have thoroughly enjoyed adding this project to his already illustrious career, saying, “To make a true story about a heroic event in New York is like three highlights on top of each other.”

On the aerial shoot day, the camera was mounted on a highly technical rig, the same used for the ‘Superman’ movies, so that they could follow the exact flight path of the plane to the place where it landed on the Hudson.

The wintry atmosphere of New York is beautifully captured in the cinematography and the grade. Shooting in New York is neither simple nor cheap, and part of the logistics entailed fulfilling all sorts of legal requirements and getting the New York Police Department to assist with the street scenes.

Post production was done in Cape Town, where the 3D wizards at Black Ginger added the CG airplane into the aerial footage, and created the spectacular splashdown.

The CG is seamlessly integrated; and it shows that we are up there with the best in Hollywood when it comes to special effects. The soundtrack is well crafted, with a simple, nostalgic piano piece threading through, while snatches of location sound give each scene a realistic feel.

To support what is a magnificent commercial, Nedgroup Investments has created an interactive, flash-based web page dedicated to the story, with background information about the events of the day and those involved. It is well designed and takes one on a virtual journey through the event and Nedgroup products in an engaging way.

One comes away from this 45-minute epic feeling inspired and amazed at the true-life heroism of this pilot and his crew, much as one was watching it on the news at the time. In terms of getting the message across for the brand, I think this is one heckuva powerful, engaging way to do it.