The Advertising Standards Authority of South Africa recently ruled that “There was no evidence, before the Directorate, that the use of the word vegetarian is regulated or should be used in a certain way.” Uhm, ok. This is our advertising watch dog refusing to admit that use of the word ‘vegetarian’ requires to regulation in advertising. 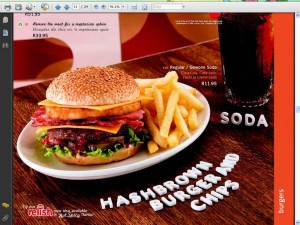 The ruling was made in a case where a consumer lodged a complaint against a Wimpy menu containing the words “Remove the meat for a vegetarian option.” For this ‘vegetarian’ meal Wimpy happily fried onions on the same grill its uses to cook its meat.

I’m the first to accept that vegetarians should probably avoid burger joints over mealtimes but this doesn’t change the fact that the self same vegetarian should not be promised and sold items the kitchen cannot deliver.

The complainant contended that the “onions are fried on the same grill as meat and the onions become contaminated by the meat. If onions are served in a dish which is described as “vegetarian friendly” then the public will be misled.” This makes sense even to a no-vegetarian.

Wimpy countered that “it is correct that the onions in question are fried on the same grill as various meat and chicken products after the grill has been scraped to remove residue. The complainant has not made reference as to what contamination in issue could be. There is only an implied assumption that there is any contamination at all. To give credence to the complaint, it was submitted (by Wimpy) that the complainant should be required to provide scientific evidence to the situation which she alleges exist.”

Nice one – get Jane Public to hire a lab to test the onion rings on her burger or bugger off. We’ve entered an age of two way engagement with consumers and brands that care. Yeah right. Scraping meat residue of the grill (if it actually happens) doesn’t make a vegetarian option.

ASA says that the Department of Health has in the past indicated that currently no South African regulations exist that make provision for vegetarian claims. That would be because it’s a matter for consumer watchdogs rather than government departments.

A little digging around shows that in the UK the The Food Standards Agency acknowledges that there is no legal definition for the terms ‘vegetarian’ or ‘vegan’ anywhere in Europe either. It still manages to put out guidelines which seems to set a good standard and which the ASA and Wimpy are welcome to view here for free and gratis. These guidelines clearly state that “Manufacturers, retailers and caterers should be able to demonstrate that foods presented as ‘vegetarian’ or ‘vegan’ have not been contaminated with non-vegetarian or non-vegan foods during storage, preparation, cooking or display.”

It’s a slap in the face for vegetarians not to mention those of us who have to live with them and will now be forced to skip that Wimpy coffee in solidarity.